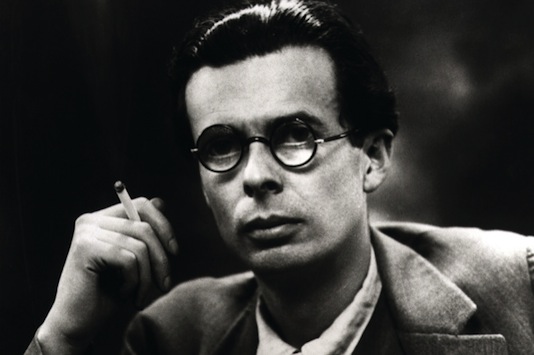 Dystopia is constantly in need of updating, as our nightmares of the future are reflections of the present moment’s anxieties. And yet, there are patterns that appear and reappear, and revisiting the past visions of the future may uncover not only things that we’ve neglected to invent, but possible realities we’ve forgotten to fear.

Like most Americans I read Aldous Huxley’s Brave New World as a young person, roughly around the same time as I read Orwell’s 1984 (which I also recently re-read). The latter book resonated more with me, and as a novel it is much more successful: more emotionally engaging, more haunting, and the characters are not just puppets for the novelist’s ideas but feel like real and suffering individuals.

But re-reading Brave New World recently, in the light of 2015, made me wonder if for all of Orwell’s prescience about the surveillance state, Huxley wasn’t more prophetic in the long run.

True, much of the book is pretty out-of-date with today’s nightmares. Its portrayal of a eugenically-engineered caste system illustrated somewhat fashionable ideas for the 1930’s, which Hitler and the Holocaust banished from intellectual life. Centrally planned economies, mass social conditioning, and more in the book about the excesses of Statism aren’t the biggest things to fret about these days in Western countries. And 1984 too feels dated in the same way.

Where Huxley feels prescient now is in his portrayal of soft totalitarianism, consumer culture, and designer drugs: so comfortable it’s irresistible. Where in 1984, resistance is met with brute force and torture, in Huxley’s Brave New World, it’s met with non-lethal weapons, pacification, and banishment to the margins. Resistance isn’t crushed, it’s neutralized, absorbed. In 21st century capitalist democracies, this tends to be what happens – resistance is more often co-opted and neutered, rather than smashed with an iron fist (though of course there are exceptions, it hardly compares to Stalin-era Russia).

When the Savage – brought to the brainwashed wonderland from the Reservations where people still marry and worship – attempts to foment revolt, he and the rowdy crowd are brought down not with billy clubs but clouds of pacifying psychedelic gas. People who show too much independent thought are not subject to sadistic self-shattering, but deported to paradise islands of leisure where they can continue their subversive tendencies towards monogamy and solitude without contaminating the collectivist whole.

In 1932, when Brave New World was written, totalitarian and authoritarian societies where in full bloom. The horrors of Hitler and Stalin were on their way. The dreams of mass social control and central planning, human hives where individuals are mere cells, and genetic caste systems were accurate evocations of what was about to be attempted.

But what about after all that? More than twenty years after the fall of the Soviet Union, it’s now an era where even wars aren’t fully State-managed. It’s a world of non-state actors, deregulated economies, and laissez-faire capitalism. Today’s dystopias (The Road, The Hunger Games, the recent California) tend to portray not nightmares of an excess of the State, but an absence of one: anarchy in the ruins, brutal neo-feudalism, disaster from lack of resource management. We no longer have nightmares of human societies doing too much in an effort to engineer the perfect society, but rather, doing too little.

Our dystopias have gone back to the wilderness.