Halfway Great: A Short History of the BART System 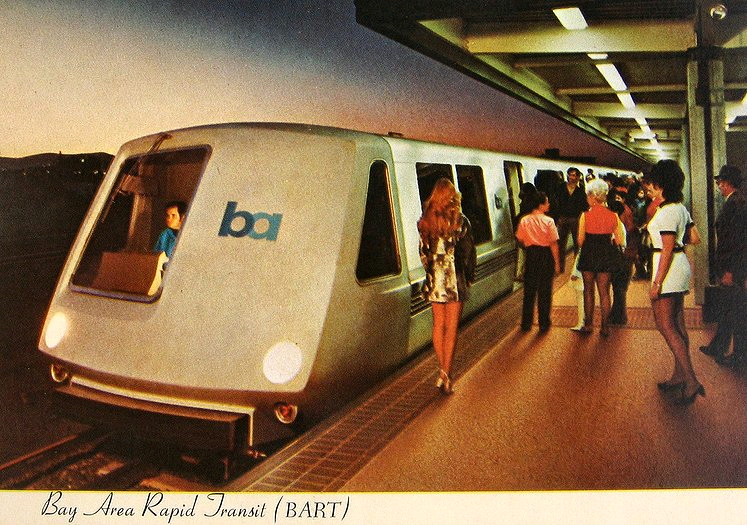 The Bay Area is a collection of cities and the only transit system that connects them is BART. Live in the Bay Area for any length of time, and you’re likely to get very familiar with the BART (Bay Area Rapid Transit) system: reliant on its reliability and speed, and frustrated with its limitations. I sometimes find myself explaining the Bay Area’s tangle of public transit systems to people from other cities, and it easily gets confusing. So here it is, in as brief a space as possible: context for the BART system and why it is the way it is.

The BART system was developed in the 1960’s as a sort of transit superhighway. They are relatively high-speed trains, and were intended to connect the various local transit systems that already existed in Bay Area cities. In practice, BART became heavily used for local trips within the same city, blurring the distinction between it and the local systems it’s supposedly supplementing, not replacing.

In many big cities – New York, Mexico City, or Berlin, where I live currently – you have one massive, integrated rail system with lots of branches and local stops, and densely connected core areas. You don’t have a comparable situation in the San Francisco Bay Area. It’s little clumps of spaghetti in dozens of cities, with the biggest knot in San Francisco, and then, there’s the BART – an excellent but thinly spread web of rainbow yarn to connect them all.

The reason for this situation goes all the way back to the origins of the region’s political system. In the urban Bay Area’s early days in the 19th Century, there was a grand debate on whether the it would constitute a “Greater San Francisco” with central governance and semi-autonomous boroughs, along the lines of New York. Obviously, this didn’t happen and the nine Bay Area counties wound up completely independent of each other… and when it came time to do urban transit, they each did their own thing. 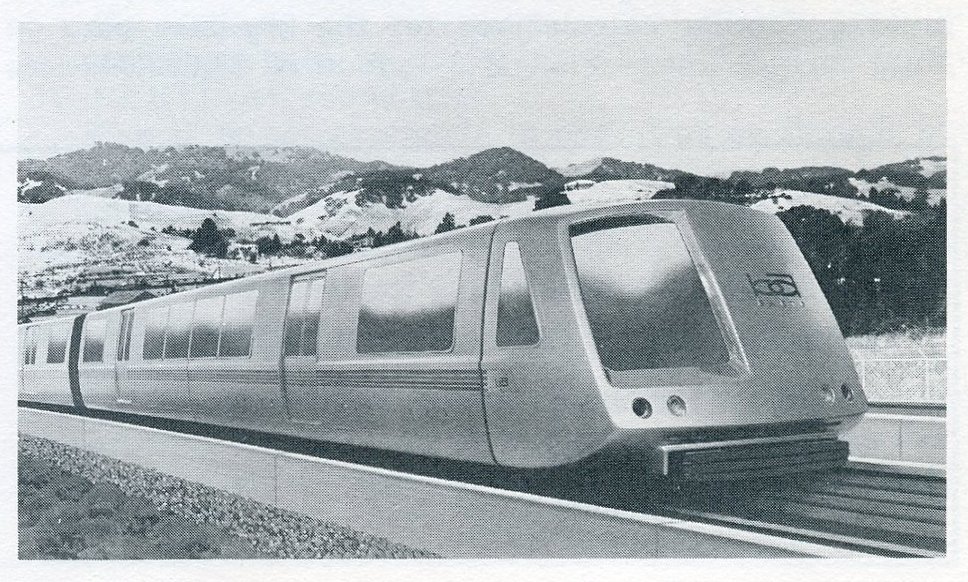 The BART system comes along roughly a hundred years later, and tries to string them together – the only problem is, there isn’t much to tie together at all in most of the mid-century Bay Area. The streetcar system the East Bay once had is long gone (see our post tracing the history of the Key Route system), in fact all the other counties aside from San Francisco don’t have urban rail, and some not even much in the way of bus lines.

While San Francisco has a large transit system, it’s plagued by inefficiency and already fragmented: the MUNI system includes streetcars, a subway, cable cars and buses. Today along with BART, there’s the lumbering colossus known as CalTrain, connecting S.F. with Silicon Valley (the peninsula to the south and San Jose) in a decidedly low-tech way. This brings the total number of separate types of transit San Francisco has to six, governed by three separate authorities.

Early on, the planners of BART got very ambitious, and envisioned a regional system that connected outer areas to the urban core. The recommended plan from 1957 included trains to the North Bay and South Bay, going all the way to Santa Rosa in the north and San Jose in the south, forming a complete ring around the Bay.

BART’s early vision was grand, and while it sucks that it wasn’t fully executed, you have to admire it and appreciate just what a big deal it was to get even this far. The Bay Area, limited as the transit is compared with other cities, is amazing by California standards and in sharp contrast with L.A., which is only now rebuilding some of its lost pre-automotive transit infrastructure and still impossible to live normally in without a car.

Today, transit utopians are more likely to dream of a system that follows through on the 1950’s plan, while also daring to tread on S.F. MUNI’s toes by better connecting denser areas of San Francisco to itself in a serious way. Recently Jake Coolidge, a geographer and cartographer doing graduate studies at Stanford, created the following map imagining a BART that really connects the Bay Area in the same way that cities like London are. It went viral and got a lot of people revisiting the original plans that inspired Coolidge to do his fantasy map. 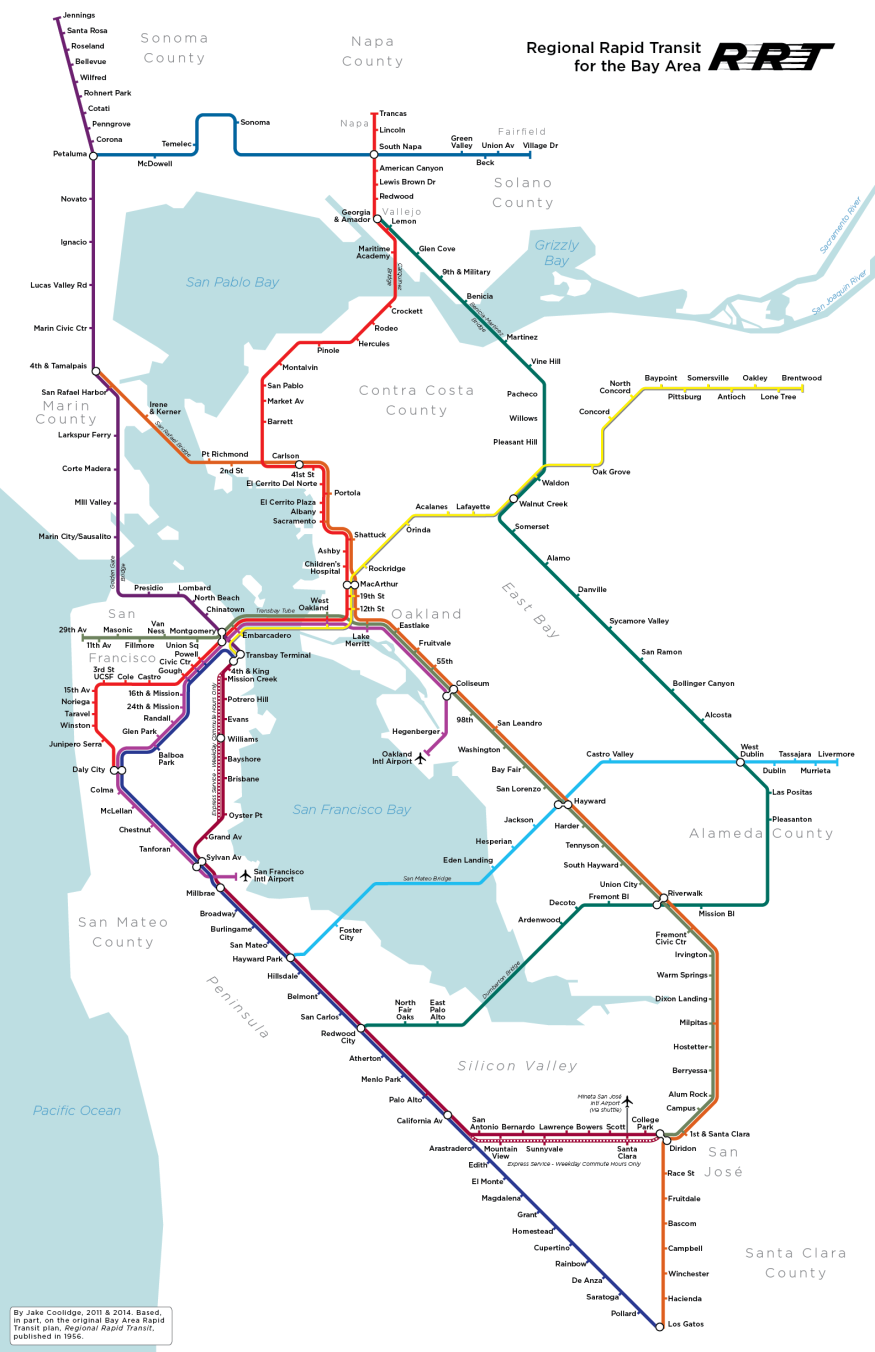 Contrast this with the real BART map:

Sure, it would cost untold billions. But it’s fun to dream, and other urban areas have made it happen, right?