Junkie Noir: My Dreams Out In The Street 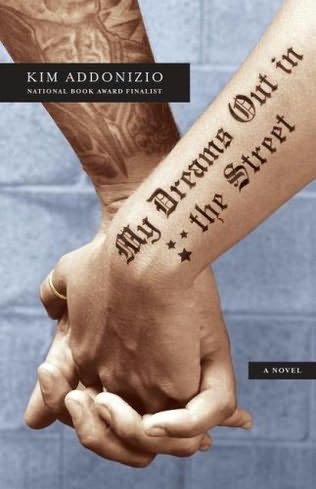 Reviewed: My Dreams Out In the Street
Author: Kim Addonizio
Hardcover, 272 pages
Publisher: Simon and Schuster, 2007

Unlike many books which purport to be about crime and are actually about police, Kim Addonizio’s My Dreams Out in the Street is really about crime—the world of crime. Cramped hotel rooms, inner city sidewalks, dope and prostitution, the threat of violence and even murder. The abrasiveness of the book—its frank depiction of the desperation, revulsion, and terror experienced on the streets—is invigorating. It throws open a window on little-understood corners of San Francisco, namely the Tenderloin. But the novel’s death-grip on gritty realism, ultimately, pushes the limit of believability.

We follow Rita Jackson, homeless and estranged from her husband, as she drifts from the shelter to the park to the hotel, turning tricks and strung out on heroin. After she witnesses a crime, she becomes a target for murder herself. She’s helped by an alcoholic private investigator who falls for her, destroying his lackluster marriage. Across The City, her husband Jimmy fumbles as he tries to get on his feet. Will they be reunited? (It’s to Addonizio’s credit that she avoids a cliché’d reunion scene—I won’t spoil it by saying more.)

Addonizio started as a poet before turning to the novel, but her tough, abrupt prose more closely resembles the crime novelist Jim Thompson or hardboiled noir writer Dashiell Hammett than it does a poet’s exploration of genre territory, such as Michael Ondaatje’s try at the Western, Billy the Kid. Her language is plain and direct, but it does have a combination of sensitivity and blunt force that can be arresting. At other times, it uses a telegraphic rhythm in a way that substitutes a sense of drama for imagination: “He pulled the zipper down. There was something about the sound of a body bag zipper. It was a long sound. It went on and on.”

The abrasiveness of the book—its frank depiction of the desperation, revulsion, and terror experienced on the streets—is invigorating.

The details are where the book is strongest: the barflies in a Polk Street pub, the resigned banter in a squad car as it goes down Mission St., the smell of a Tenderloin SRO lobby. In My Dreams Out in the Street, people don’t just have one or two drinks. They have six or seven, and then they keep on going. They’re a raw bunch of characters, occasionally violent, usually reckless, and always looking for an opportunity to forget themselves and complicate their lives. Addonizio’s narration veers into her characters’ consciousness, exploring their motivations and fears. Despite the author’s commitment to realism, there is a problematic simplicity to what we learn about them. She drops hints about how unsophisticated her characters are: “Jimmy opened one (of Stan’s books) and flipped through the pages, looking at the lines of type, not seeing the words.” The books Jimmy has no feeling for have “little prize announcements on them” like “finalists or winners for the Pulitzer or National Book Award.” Addonizio, it happens, was a finalist for the National Book Award. Is this the author poking fun at herself, at the relevancy (or lack thereof) of her own work to the people she chooses to write about? It’s a little puzzling, since My Dreams is written in a style that is so direct and accessible that no one would ever fault its author for highbrow elitism.

Though there’s no epigraph after the title page telling us where the novel’s title comes from, my best guess is that the title of My Dreams Out in the Street comes from the Tom Waits song “A Sweet Little Bullet From a Pretty Blue Gun.” In that song, Waits writes about “sweet little girls with nothing in their jeans but sweet little wishes and pretty blue dreams,” before bitterly commenting on the underbelly of Hollywood, after which the narrator turns to “throw my dreams out in the street, and the rain will make ‘em grow.” But the dreams held by the characters in this novel are awfully small, and hard to imagine being watered into much of anything, by the rain or by a turn of good luck. This is the one detail Addonizio gets wrong: Rita and Jimmy have dreams that aren’t giant size, spinning like wild carousels, desperately imagining possibilities outside their circumstances. Instead, their dreams are small enough to fit in a shot glass, and that’s about how deep they go.