State of Restlessness: West of the West 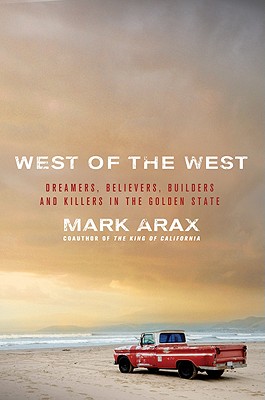 There are many Californias: the endless acres of Central Valley farmland, the sprawling megacity of Los Angeles, the fog-shrouded marijuana country to the north. Orchards, forests, suburbs and high-rise downtowns. Veteran reporter Mark Arax’s newest book, West of the West: Dreamers, Believers, Builders, and Killers in the Golden State, carries you through many of California’s divergent worlds, and offers rare insights into them. The book’s title comes from a famous quote attributed to Teddy Roosevelt, who said “when I am in California, I am not in the West, I am west of the West.” But if what Roosevelt meant was a fertile, coastal paradise beyond the rugged and untamed frontier country, Arax’s book deconstructs that notion. His California is no paradise, and the inhabitants have an unsettled (both literally and figuratively) existence; their relationship with this place is inevitably tied up in what brought them here. Arax finds that “the roads that lead to California are long roads.”

West of the West is a collection of essays written over several years following the end of Arax’s marriage and long-time job with the Los Angeles Times, and his own restless search for rootedness forms a through-line across the book. Yet it’s not a memoir—there’s too much hard reporting here to call it that. He bases his explorations in a California few know: his native soil, the Central Valley farmland, where the Armenian-American community he springs from came and settled to work the land and evade the threat of genocide. Wherever he goes, Arax is closely observant of economic inequality, generational shifts, ethnic ties, cultural disconnects, and the other social complexities that are too often lost in the day to day grind of reporting—you can feel his relief to be able to spread out and say things how he wants to after 25 years at the LA Times. The most memorable chapter revisits Steinbeck’s territory in The Grapes of Wrath; “The Summer of the Death of Hilario Guzman,” traces the lives of Oaxacan migrants following the grape harvest in the Central Valley with heartbreaking detail. In another chapter, Arax completes this thread when he tracks down one of the last surviving Okies, Earl Shelton, who came to California in 1941 and says of today’s fruit pickers: “We crossed the Colorado, and they crossed the Rio Grande—other than that, I don’t see much difference.”

In addition to deep reporting, Arax also has the ability to bring novel social insights to the table. He does this when he travels north to Humboldt and Mendocino County to write a dispatch on the marijuana country and finds himself contemplating the generation gap between the hippies and their children, who are now running the show with a much more business-minded attitude than their parents did. With a visit to “Conspiracy Con,” he connects California conspiracy culture to post-9/11 anxiety and the failure of the Vietnam War generation to prevent the nightmares of the ‘00s. In another chapter, he details the legacy of cultural disconnect, ending in murder, that haunts an Armenian restaurant dynasty in LA. And in “The Great Microbe Hunt” about unpasteurized milk and E-Coli, he uncovers another generational drama in what becomes a portrait of the McAfee family—the dairy farmer and raw milk activist son; the father who risked his farm to bail Angela Davis out of jail and sailed to Cuba in the 60’s to help Castro.

“We crossed the Colorado, and they crossed the Rio Grande—other than that, I don’t see much difference.”

National politics has its own version in California, and Arax pinpoints this in “The Agent,” about a trumped-up terrorism case in Lodi that an award-winning FBI agent becomes so disgusted with he sides with the Pakistani immigrants. Arax observes war hysteria in the Central Valley, and from his vantage point as an Armenian-American, comments on the odd alliance between Jews and fundamentalist Christians. And in a chapter that begs for a book of its own, “The Last Valley,” Arax describes the bald corruption that under-girded the housing boom and which preceded our current bust: an incestuous affair between developers and officials who couldn’t care less if every inch of farmland were paved over for new subdivisions, and to whom urban planning wasn’t even an afterthought.

Arax concludes the book with two episodes from his own life: one about the group of Armenian friends who he carries on the tradition of making moonshine with; the other about the death of his father, who was murdered under circumstances only understood 30 years later. The West of Arax’s California is a frontier of sorts, but it’s a post-colonial one. It’s one where refugees and native sons alike are struggling to reinvent themselves—against a past that is shadowy and violent and for a future that is uncertain and filled with both peril and opportunity. If there are two iconic features that emerge from these stories about the curious culture here, they’re greed and utopianism, which we might characterize as the desire to create a private Eden walled off like a pleasure garden, and the alternative, a desire to create a shared Eden, a better world for oneself, one’s family and community, and even the world as a whole. California, and Arax’s book, is full of both of these impulses: it turns marketing geniuses into pomegranate kingpins, it turns dairy farmers into Communists, and it drives migrants—yesterday and today—to sweat and strive and endure grinding poverty.

The thing they all have in common is this: they’re not satisfied with things as they are.