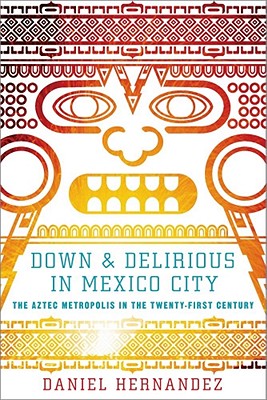 Reviewed: Down and Delirious in Mexico City: The Aztec Metropolis in the Twenty-First Century
By Daniel Hernandez
Paperback 288 pages
Publisher: Scribner, 2011

In Down and Delirious in Mexico City: The Aztec Metropolis in the Twenty-First Century

Daniel Hernandez, a young American journalist from San Diego and the son of immigrant parents from northern Mexico, goes south to immerse himself in big bad Mexico City (Distrito Federal, D.F.) with the eyes of an insider-outsider.

Enthralled by the grit and glamor, swept up in the energy of this megacity, what he finds might be best summed up in the idea of mutation—one that he invokes repeatedly in the book: a defiant embrace of the city’s toxicity along with its transformative forward movement.

Hernandez is a keen observer of subcultures—the book has chapters on punk, emo, indigenous-inspired, and American Chicano-influenced youth cultures, among others—and the book is full of illuminating details about one of the world’s most interesting, dynamic, and misunderstood capitals.

What can you say about a city of over 20 million people? Not much in general, but an awful lot in particular.

Subcultures turn out to be a great way to explore this megalopolis and the cultural patterns coursing through it. Mexico City is seen embracing long-repressed foreign influences from north of the border (punk, Chicano, hip-hop) while continually remixing and nationalizing these influences.

Simultaneously, elements intrinsic to Mexican culture—Catholicism, indigenous traditions, the concept of mestizo or mixed identity—are giving birth to new forms in the context of the 21st century megacity and a rapidly modernizing Mexico. There is, today, nothing more Mexican than the violent collision between ancient and modern, traditional and newly invented, native and foreign.

Hernandez does take on the big topics you would expect. He describes the paradox of family cohesion, government corruption, and criminal terror that is today’s Mexico in chapters on the kidnapping and general “inseguridad” that plagues D.F.; other chapters discuss Mexico City’s staggering environmental problems and pollution and the impact of the narcotics trade on everyday life.

But the best chapters are where the book focuses in on subcultures. There’s an exploration of the figure of Santa Muerte (Saint Death) and her importance to narcotraffickers as well as everyday Mexico City residents (aka ‘chilangos’), as well as a look at the party-infused devotion towards San Judeo, the patron saint of desperate causes.

Punk and metal have been thriving in Mexico City for decades now, and the battle-scarred punks Hernandez profiles also tell the story of one of D.F.’s most notorious neighborhoods—now gentrified into one of its worst episodes of human displacement. And the “emo” trend—and violent backlash against it—open a window onto Mexico’s legacy of machismo colliding with modern, more fluid expressions of gender and sexuality.

And then, there’s the subculture Hernandez himself was most embedded with—the cocaine-and-booze-fueled, manic, fashion-oriented world of young cosmopolitan chilangos. The author found himself jolted by the contrast of the Berkeley where he went to school (where hemp and reggae were the prevailing mood) with the early 2000’s D.F. where he landed—fast-paced, electronic, chain-smoking, dangerous.

Basically, “hipsters” before the term became widespread—and when he pauses to examine the word (which is worth doing) he finds that looking past the shallowness and lifestyle consumerism, there’s also an inclusive notion worth celebrating, of a global, interconnected, international counterculture, in which mix-and-match creativity is everything.

Accustomed to being viewed as a Mexican in the U.S., someone slightly “other,” he’s never been more North American than when he goes to live in Mexico’s capital.

Young Mexicans in the era of Y Tu Mama Tambien and Amores Perros are living and working in ways that shatter sterotypes and preconceptions about what Mexican life is supposed to be. Awareness of this—in no small part due to those films—has percolated outward, and in the 2000’s, Mexico City acquired a certain edgy desirability for non-Mexicans, a global cache which chilangos themselves sought to capitalize on by siezing the moment and promoting their fashion design, art, and music.

Traveling to another country teaches us about our own, and about ourselves. The main shortcoming of Down and Delirious in Mexico City is that author Daniel Hernandez lets us in a little on that process, but only goes halfway. It’s a little frustrating when he introduces personal details that he leaves half-sketched, about his friendships and hardships. He mentions that he gets so low on money and desperate that at one point, he feels that he can empathize with D.F.’s many thieves—piquing our interest, but then moving on without mentioning it again.

He describes what appear to be dates and crushes, but withholds details about whether they turned into affairs. It might be in the interest of keeping his focus on the city, but it comes off as self-protective—an instinct I can empathize with as a writer, but find hard to excuse as a reader.

Regardless, what he does reveal will be intriguing to anyone interested in the subtleties of the US – Mexico relationship, and how the idiosyncracies of a bicultural, border upbringing reflect on the individual level. Hernandez is instantly identified as a guero (white boy) in D.F., pegged as a gringo by total strangers.

Accustomed to being viewed as a Mexican in the U.S., someone slightly “other,” he’s never been more North American than when he goes to live in Mexico’s capital. He realizes the region he and his family are from—the border—is owned and acknowledged by neither the U.S. or Mexico. To the writer’s credit, he manages to find some humor in the irony of this situation.

Hernandez’s book won’t disappoint those interested in Mexico City who are looking for an up-to-date snapshot of the place. It adds to a growing body of literature in English on the city, one that, like the place itself, is worth spending some time visiting.