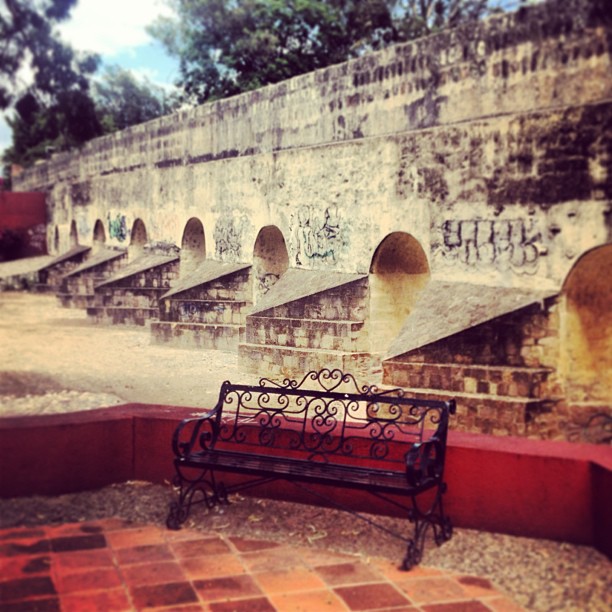 Since March I’ve lived in an area of Oaxaca called Xochimilco, just north and west of the city center. The area is known for streets and walls assembled from stone, and an acqueduct, built hundreds of years ago, that runs through the neighborhood. The vertical, green humps of the Sierra rise above, to the north, brought close by the inclines of the hilly streets.

In Xochimilco, the rattling diesel of the buses and taxis falls away, replaced by the buzz of insects in the sunlight and, when you pass the right building, the shucking and clacking of a wooden loom. Weaving is done here traditionally, and hidden beside cinder-block houses, markets and bakeries, corn-choked ditches and cobbled streets, there are workshops where low-power motors chug away, and tinny radios blare banda music, static, and rock n’ roll.

Blankets, carpets, curtains, bedcovers. From the softest, finest material, using natural dyes from local elements like the cochineal bug, which feeds on cactus and produces a bright red dye. The crafts here have deep roots. You can buy these textiles directly from the weaver if you find the right place.

Xochimilco is close to downtown, but it feels far away. It’s cut off from Centro by Niños Heroes, a busy stretch of the Panamerican Highway that cuts through central Oaxaca and leads up to Mexico City, or further south towards the Pacific coast and Chiapas.

On the other side, the neighborhood is cut off from Reforma, the large, more modern neighborhood directly north of the historic center, by a river. It’s a dry and weed-choked ravine for most of the year, or at least it has been since I’ve seen it. But the width and depth of the channel promise that there are times when it’s full, when the water comes down from the Sierra.

A short walk down Calle José Lopez Alavez, there’s an area that seems to be the heart of Xochimilco. The old aqueduct towers over the river bed, forming an enormous bridge, at a point where the river widens into a large, cobbled plaza. There’s stairs that lead down from the road to a platform with benches where you can sit above the river bed. Sometimes there’s students, or cops taking a nap.

There are only stray dogs in the dry riverbed, curled at the base of the graffiti-splashed pillars of the aqueduct. But you can picture the water coming down, spreading out, lapping at the steps, and cascading past where the dogs huddle, down that ravine that leads downtown.