Museum of the Inquisition, Lima 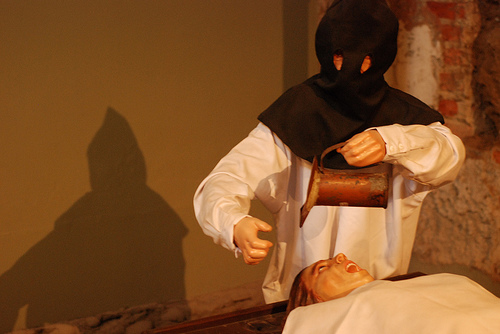 Wax inquisitors sit at a covered table with claw feet. A wood cross like a gnarled tree rests on the table. Here is the place where people kneeled. Further into the building, they were interrogated by men licensed as holy.

Waterboarding, by other names, was a primary tool of the Inquisition.

Other means of torture: being hung from your wrists strapped behind you with a weight on your ankles, having your limbs pulled in 4 directions by rope, strangulation and various types of restraint, restraint with whipping. Also imprisonment, in confined spaces without food or light.

The most disturbing aspect of the Inquisition exhibit is not the gothic horror of its spectacle. Nor is it the scale of the crimes committed by the Inquisition: while thousands were tortured, only a few dozen were murdered by the Peruvian Inquisition, and over hundreds of years (1570-1820). What is truly unsettling is that the crimes of the Catholic Church during the Inquisition served as a prototype for State terror practiced on a much more massive scale in our own time.