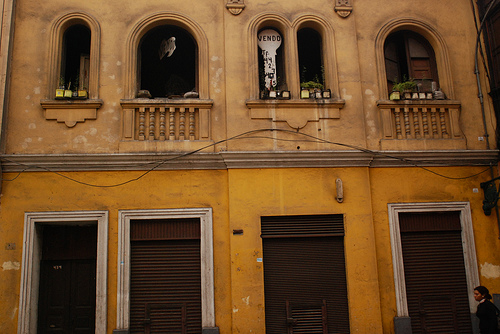 At the traffic light a boy with long dreadlocks juggles, spinning batons high in the gray air. When he finishes, a girl with facial piercings doffs her fedora and runs from car to car, collecting soles and centimos in her brown hat.

The Lima freeway is like an American freeway in many respects, but between the north and south lanes is a jumble of concrete and dirt, express lanes and medians left half-constructed. Going from south Lima to the Centro is like heading into LA. Graffiti laces the freeway trench. Steel, glass, and concrete towers rise at intervals, never announcing a solid continuous block.

Police riding 2 on a motorcycle. Battered white helmets and high riding boots. Taxis tailgate the police bike. The woman cop is on the back. She signals with a leather-gloved hand, an outstretched arm.

The graffiti is by a Fujimori supporter. Fujimori is credited with suppressing terrorism in Peru. Recently he was given a sentence of 25 years in prison for human rights abuses.

The cab driver gives us a good deal from Barranco to Lima: 10 soles ($3 U.S.). We get to chatting and it turns out he was born in Cusco, where we were just visiting, in the Andes, and he is also familiar with Iquitos, in the Amazon, where we are about to travel. His mother was born in Iquitos and he has visited often. The Eric Clapton song “Cocaine” comes on the radio. I whistle along for a moment and he turns it up, then asks us if we’re into drugs.

We all laugh, then the cab driver starts talking about his former drug problem. He was an addict, he says, for years, hooked on cocaine, until he went to the jungle to get cured.

He had his body cleaned by a shaman, spiritually cleaned, with a treatment of the powerful hallucinogen Ayahuasca in a traditional ceremony. Since then, the driver says, he’s managed to stay clean for the first time – and just passed the year mark.

Colonial buildings, burnt yellow with white trim, tall ornate black window boxes studding their tall faces. At one corner, a modern box, free of Moorish arches and curving lines, matches the color of the older buildings around it: a warm mustard, an orange clay.

There are the Church and State: the Catedral and the Palacio Gobierno. An angel blowing a long trumpet rises above a fountain in the center of the plaza, and viewed with this in the foreground along with tall skinny palmettos, the stone embroidery of the Cathedral looks South American in the balmy air: both imposing and warm, exotic and approachable.

The Government Palace is never less than imposing, though. Occupying an entire side of the Plaza de Armas, a high iron grille fences it in. Guards with machine guns strapped closely to the fronts of their chests, baseball caps pulled low over their eyes, banana clips curving like scimitars over their abdomens. The Palace is featurelessly Greek, totally colonial, tired gray columns supporting a roof as heavy as the sea. Stiff ornamental guards, looking a bit like British beefeaters, stand at attention by the doors of the Palace and the red and gold carpet, inside the iron enclosure.

On the Plaza itself, families stand by the fountain for pictures. A man takes digital snapshots, then prints them out and provides you with an instant print for a few soles. A high school, in blue and white uniform, marches for sobriety and learning. They set off balloons and party screamers. A boy with an image of Jesus covering his shirt looks a pretty girl up and down. Old hunched women sell roses and fried foods.