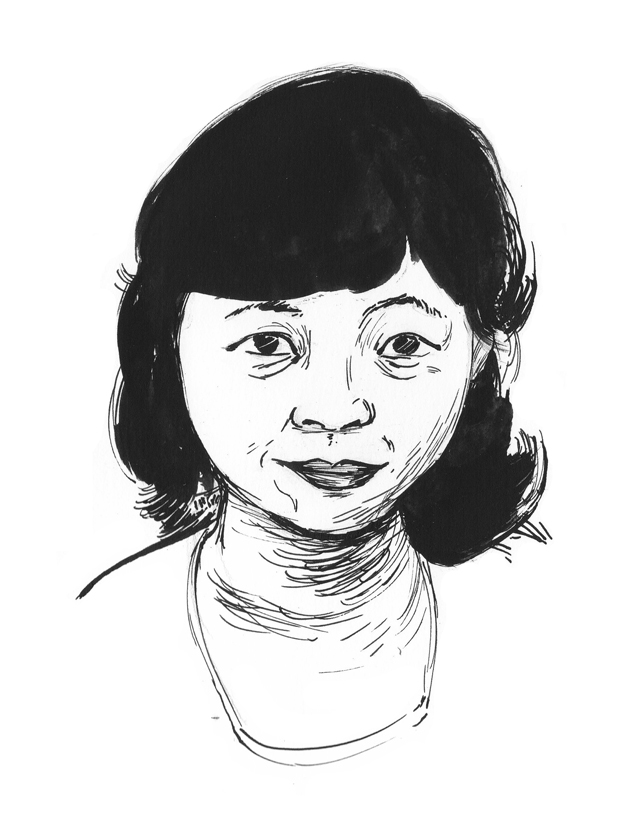 At a public appearance before a group of writing students, the way Yiyun Li described becoming a writer, it sounded like an accident. It was, unquestionably, a stroke of luck that Li happened to be studying immunology at the University of Iowa, home of the legendary Iowa writer’s workshop. It was when she took a writing class at that school that she began writing, and quickly came to the helpful attention of writers who teach at Iowa, including James MacPherson. Li was born in Beijing, China and came to the US at age 24 to pursue graduate studies. She now lives in Oakland, and teaches at UC Davis.

Li’s fiction presents a startling and intimate view of individuals struggling (quietly and without fanfare) to develop themselves as human beings in the face of an uncomprehending and unyielding social order. Often her characters cultivate a secret or double existence as a way to discover who they are. The individuals and their desires are not whole or pure, the society not entirely repressive and static. Both are in flux, and even tiny, invisible gestures matter, at least to the person who makes them. The setting of modern China, with its legacies from the 20th century and centuries before, is integral to much of her writing—but not all of it, and she ranges freely between that country and the United States, usually placing her stories in overlooked and unglamorous corners of each.

It’s no surprise that a strong, capable Chinese voice in English-language fiction would offer some novelty to readers, and publishers. But it is her sensibility—perhaps some of it culturally informed, but distinctly her own as is plays out in her fiction—that makes Li stand out so sharply: identity is frighteningly malleable, and persons are at the mercy of forces (both within and without) that can engulf them, over the course of a day or a lifetime. And it’s Li’s handling of time—she telescopes out and then closes in, skipping across decades and then finding critical moments to let play out on the page—that is one of her first strengths as a storyteller.

“I have always said that there are two Chinas … I love the first but I do not love the second.”

Li has described her interest in “impersonators … I’m interested in people who want to be someone else.” And one of her most remarkable stories, “Immortality” (from her first story collection, A Thousand Years of Good Prayers) is about such a person: a man from the countryside who bears an uncanny resemblance to Chairman Mao (though Mao remains unnamed in the story), and who is recruited to be one of his body-doubles. For years, the man invests himself utterly in his role, and his disillusionment with “the dictator” and the party becomes, very late, a recognition of his own obscene innocence, and leads him to a final act of self-effacement that ties him to a brutal tradition in the history of his rural village – and that village’s relationship to the ruling powers of China.

Li expressed her bittersweet feeling about China in an interview with her publisher, Random House: “I have always said that there are two Chinas. The first is a country filled with people, like my family and many others, who try to lead serious and meaningful lives despite the political, economic and cultural dilemmas they face. The second is a country with a government controlled by one party, made rich from corruption and injustice. I love the first China but do not love the second.”

In 2009, Li’s first novel, The Vagrants, was released. Firmly set in a China in the wake of the Cultural Revolution, the novel follows members of a remote village called Muddy River and the execution of a young woman deemed guilty of independent thinking. “Her interest is not in the system itself, but in the costs and consequences of a society gone mad, one in which capitulation is regarded as the highest virtue and compassion is treated as a vice,” Pico Ayer wrote of the book, and also called it “an individual’s response to collectivist madness.”

Li cites William Trevor as her literary role model—a writer noted for his precision and care, his immersion in his characters, and his attention to the passage of time—which she talked about in her recent appearance at City Lights. Like Trevor, Li continues to pursue the short story genre, and following The Vagrants, released a new book of short stories in 2010: Gold Boy, Emerald Girl. Also in 2010, she received a MacArthur Foundation Genius Grant, and was featured in the New Yorker’s 20 Under 40 series of young writers.