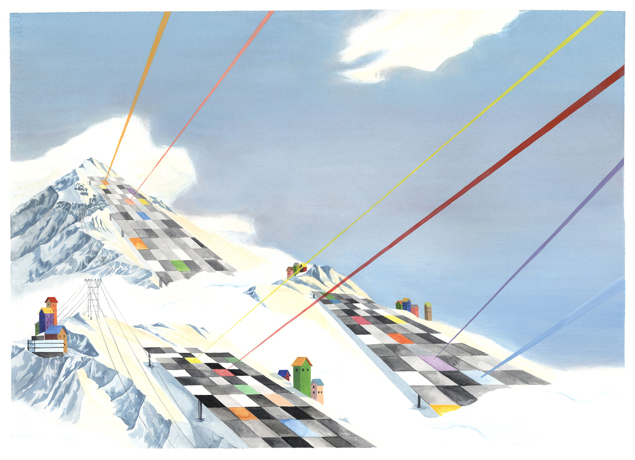 Tyler Bewley is a San Francisco-based painter and teacher. I first encountered his work at the Compound Gallery in Oakland, and was struck by his unique approach to nature and humans relationship with it—he paints landscapes mostly, colorful and whimsical dystopias depicting industrial excess, collapse, and submersion back into the earth. Risen sea levels drown cities and smokestacks spew pollution, alongside futuristic energy-generation scenarios. Most of all, his work stands out due to the care and detail with which it’s rendered. I got the chance to put his work on the cover of literary journal 580 Split when I worked on it this spring, and recently dropped by his studio with Aurora. 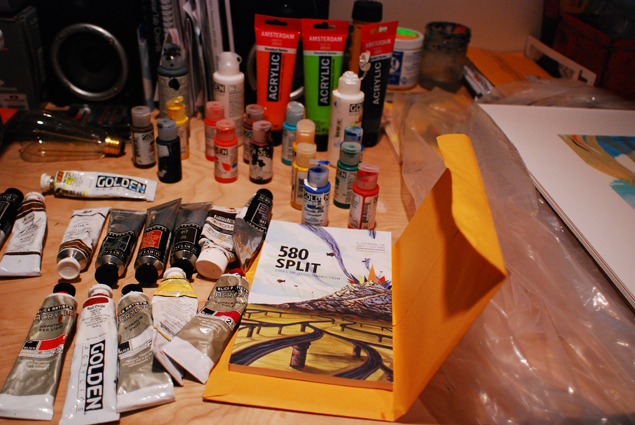 You mentioned that you recently took a trip to Asia, and it had inspired a series of new paintings. Can you talk about where you went, what you saw, and how you’re approaching it in these new works?

Over the summer I had the chance to go on a six-week adventure to Thailand, Vietnam, and Japan. It was an incredibly eye-opening and mind-broadening experience for me as I had only travelled in Western countries until this point. I found both Vietnam and Thailand to be incredibly inspiring for my work. I was blown away by the sheer grandness of the mountain ranges, and the dramatic rise of limestone cliffs emerging from the ocean. However, with each breathtaking natural experience came the juxtaposition of development and rampant pollution.

It became very apparent as I traveled the length of Vietnam from the mountainous China border, to Saigon in the south, that the model set forth by countries like the U.S.A in the 1800’s was a very selfish and unsustainable form of development. However, it is the very model that is being followed in Asia right now. The population explosion and the emergence of a middle class have these countries booming with unregulated development. As an American from San Francisco, one finds themselves balking at the lack of green planning, but when faced with the intense poverty of the people, the idea of working towards sustainable practices and eco-friendly technology seems nothing but a luxury of wealthy and developed nations.

In my newest series of works I am using these observations to comment on the possible futures of a developing Asia, and also to show the intense need for stewardship and preservation of such a diverse, and awe-inspiring natural environment. 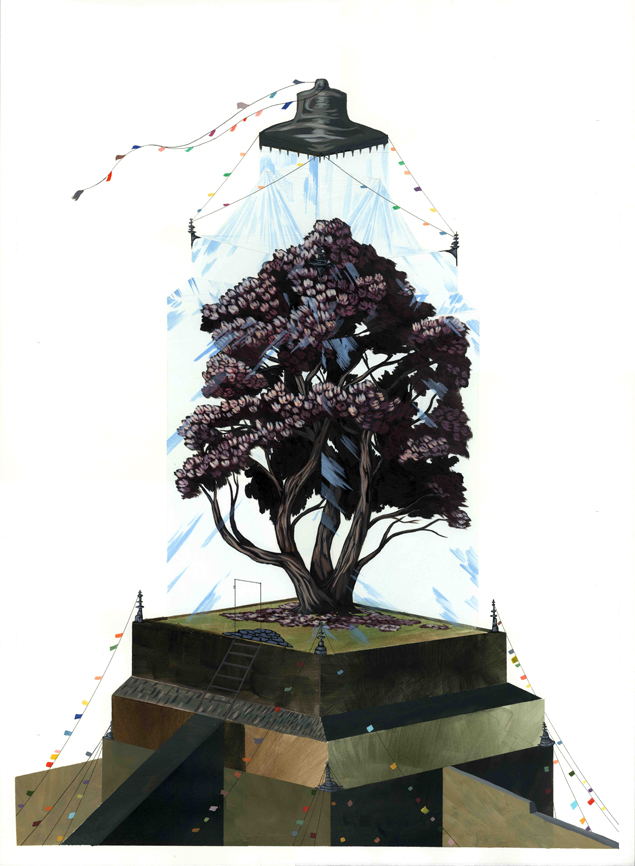 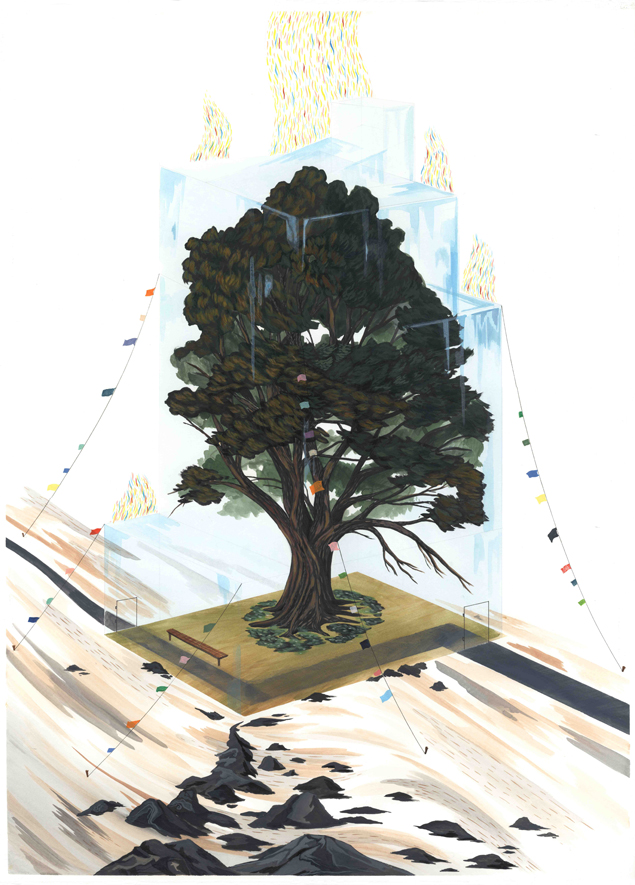 There’s a major theme of environmental destruction in your work—like the global-warming futurescapes with risen sea levels—but they’re rendered almost as pastoral landscapes. How do you balance (or merge) the aesthetic goals you have for a painting with what you want to say, the message you want it to convey?

I feel that I approach my work as an optimist, which at times can be difficult when dealing with the subject matter of environmental destruction. However, if I did not have hope for the future and for the ability of humanity to pull up from the nosedive we seem to be in, I would not be doing my work and sending the message that I am.

When I create my images I feel there is a certain power in subtlety and that by visually engaging a viewer first, and letting the message slowly be discovered, it allows more room for processing and introspection. We are so often bombarded with heavy-handed headlines and that I feel it has become a survival mechanism to shake off the messages of doom and gloom that we face on a daily basis. By using these “pastoral” landscapes, I try and have the viewer asking questions, engaging the piece rather than being told how to feel. 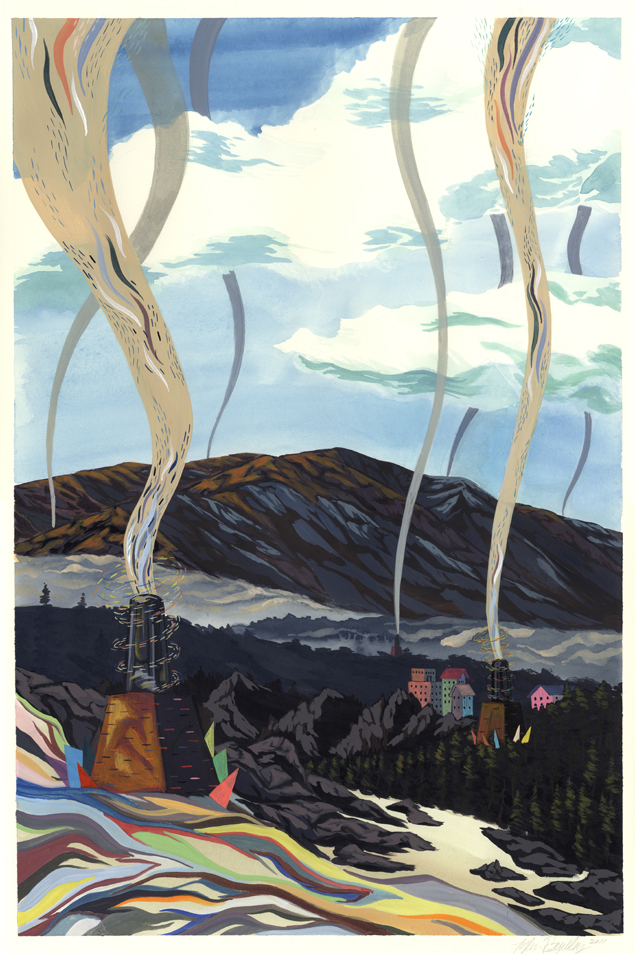 You’re from the Bay Area and live in San Francisco. What are your thoughts on it, compared to anywhere else you’ve lived?

I grew up in Oakland, and after a few years in New York, I moved back to San Francisco. I have been here now for five years. I think that the Bay Area is a special place because it combines all of the things one would want from a cosmopolitan city with an amazing array of public open spaces. I really enjoy being able to be in the middle of the city, and, 10 minutes later, be alone in nature. I also have developed a soft spot for coastal Northern and Central California. I’ve been surfing here from the time I was 13 and I really enjoy the rugged and moody qualities of the ocean, coastline and weather. 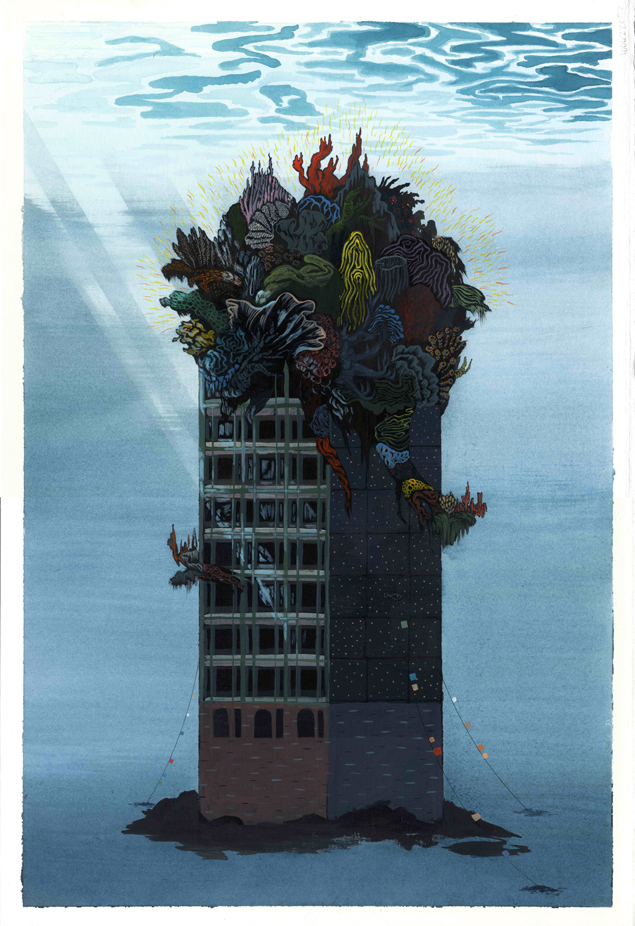 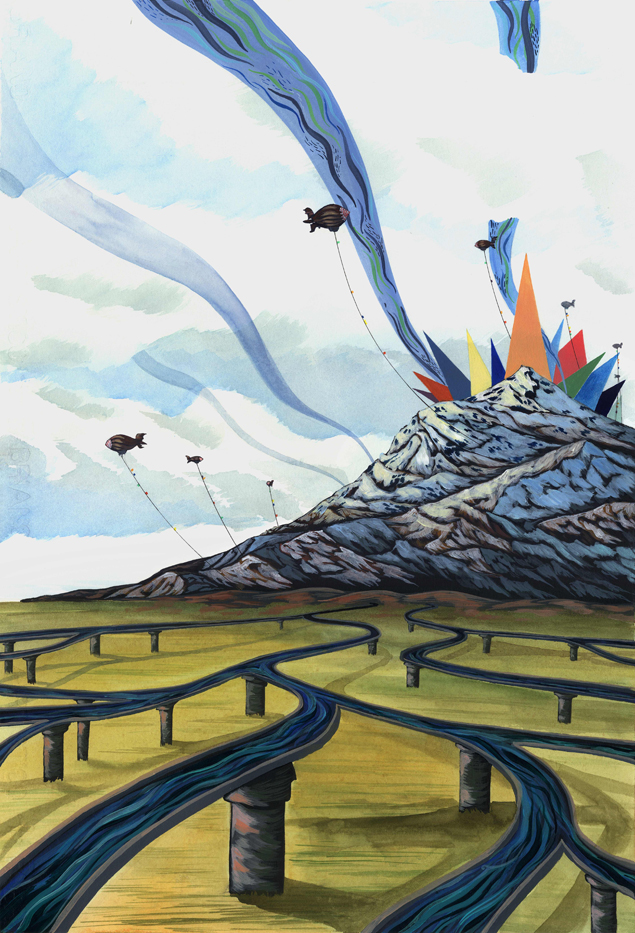 What visual artists are you most inspired by, who did you learn from or who do you admire?

When I was young, my mother, who is an art historian, would take me around to see the murals in the SF Mission District. I think this influenced me deeply and I have always been attracted to the bright, colorful aesthetic of the San Francisco art scene. Growing up, I found myself inspired by Bay Area artists like William Wiley, Jay Defeo, and Barry McGee. Most recently, I have been enjoying the work of artists such as Andrew Schoultz, Alex Lucas, Tara Foley, Casey Jex Smith, and Josh Keyes.

What materials and techniques do you use when you’re painting?

I love the actual process of painting, developing it as a fine craft, and learning new skills. Working as an art teacher at the same time that I am doing my own professional practice has created the perfect avenue for exploring any new techniques that I can come up with. Currently I am using a lot of tiny brushes, tape, Xacto knives, micro pens, wood panels, and paper. 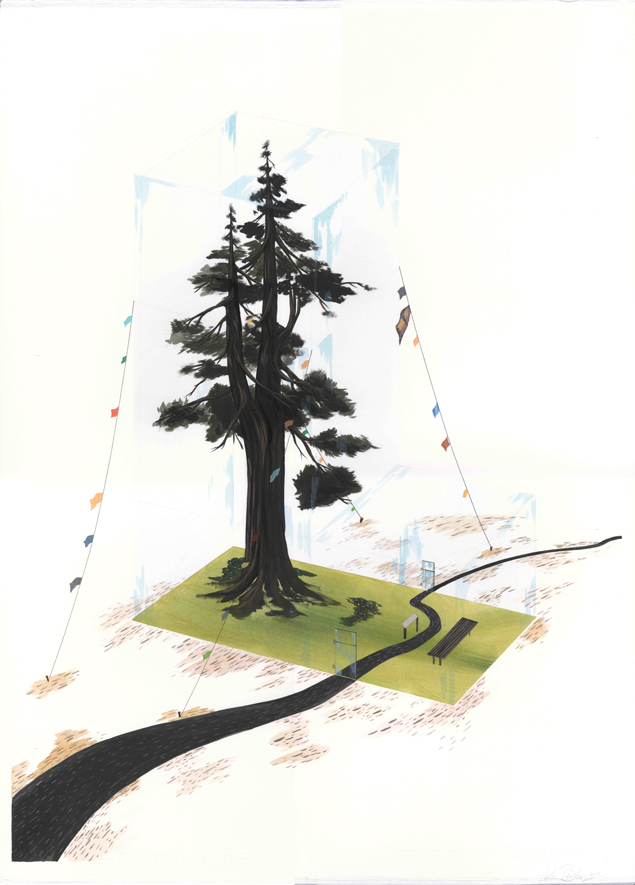 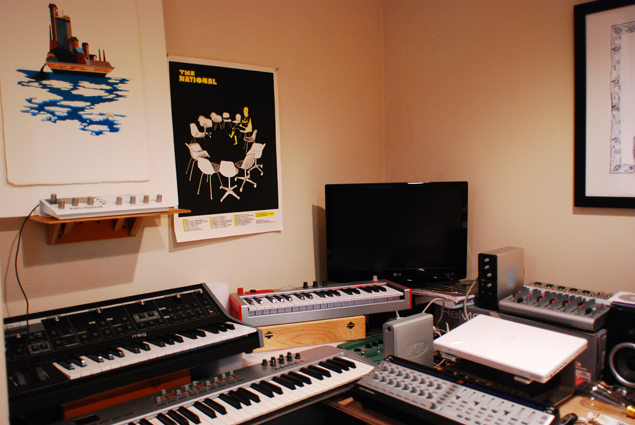 From your studio, it’s obvious you’re active in at least one other medium—music. Can you tell us about your music-making, and what you have been listening to lately?

Music is a great second outlet for my creativity. Lately, I have been focusing more on composition and music production. I have been using a lot of electronic gear and synthesizers and it has been really cool learning how to incorporate them into the song writing process.

In terms of what I have been listening to… I have been enjoying and doing my art work to the new Handsome Furs, and also to the Twin Shadow album. Good upbeat stuff for painting. 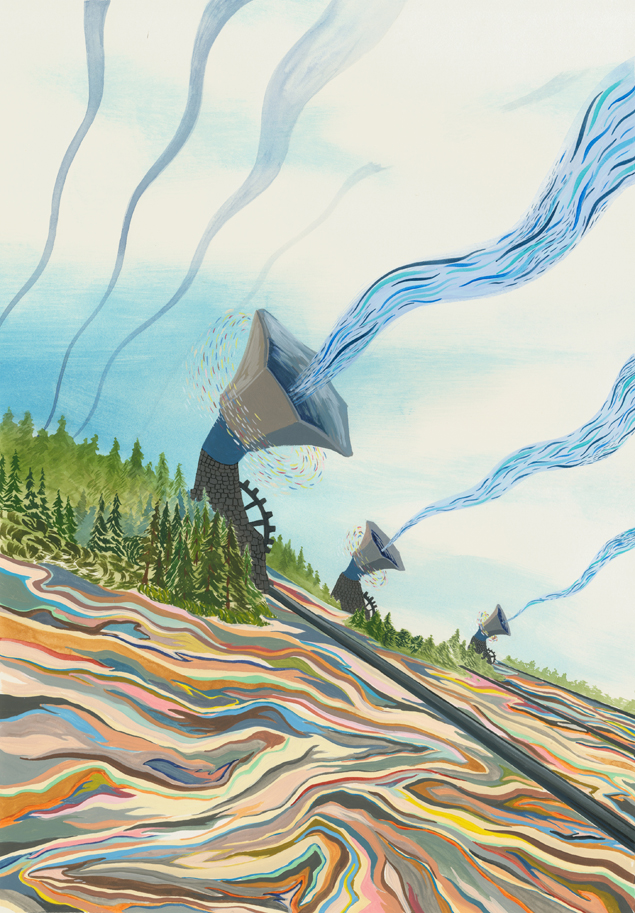 What’s next for you—any gallery plans, shows, or life plans?

Well, after my trip this summer I am excited to start a new body of work. I just finished a show over the summer at the Bedford Gallery, and as the fall progresses I will probably start sending my work out to some new galleries.

I’m also embarking on another big project right now, which is building a house. My family has some land in Mendocino County, and there is an old dilapidated shack that I am going to completely rebuild into an off-the-grid art retreat. Since I am starting with little besides a foundation, and since I am operating with a low budget, it is going to take some time and there is a lot to do. I have been totally getting into learning all the new skills, learning to be my own contractor and having a real hands-on construction experience. I am a bit of a hobbyist, and I feel as if there is never enough time for all the projects I wish I could be working on!