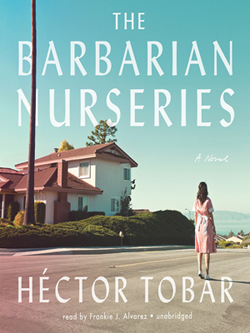 has been hailed as a quintessential novel of Los Angeles. The Los Angeles Review of Books writes that Tobar “has crafted a novel that examines the smallest people—both literally and figuratively—who populate our shared landscape, while casting a wide view on the culture created behind the walls of gated communities, within the vast inland sea of interracial bedroom communities, and on the lost streets beneath the highways, where entire lives play out in the shadows of passing SUVs.”

This isn’t far off the mark, since Tobar’s subject is the city itself as much as it is the vast array of characters who populate his story. While Tobar covers a lot of familiar ground, he does so through a unique perspective—the people who live in the margins of this society, the maids, housekeepers, nannies, gardeners, and construction workers of this city, many of them immigrants. They live side-by-side with the investment bankers, IT workers, CEOs, programmers, and other citizens from the city of L.A. to Orange County whose daily lives have become simultaneously dependent on and threatened by the domestic workers they employ.

At the center of his tale is Araceli N. Ramirez, a housekeeper and cook for the Torres-Thompsons, a young family whose great fortunes include a home in the gated community of Paseo Linda Bonita. Their children are sent to private schools, and their home boasts a tropical garden. Araceli is a prickly, aloof woman who knows the family in its most intimate details, but keeps them at arm’s bay to maintain her own sense of independence.

Though Scott and Maureen, the heads of the family, acknowledge Araceli’s excellent skills as a housekeeper and cook, they are incurious about her or her interests, which includes the art she creates and hangs in her quarters, a small bungalow next to the family home. They are far too preoccupied with their own problems, and those problems are many.

As the novel begins, the Torres-Thompson family have already let go most of their house staff after suffering a crushing financial blow. Scott, who owns a software engineering company, has lost most of his fortune during the economic downturn, forcing the family to tighten its budget. Araceli resents her employers’ decision, largely because she held a tentative solidarity with the other staff, particularly Pepe, the gardener whose work kept the expensive tropical garden from going to seed. She feels alone and particularly alienated from her culture in this environment.

With their gardener and nanny to their three children are gone, Scott and Maureen undertake the household duties once left to the paid help. The burden begins to wear thin, and while Maureen does a game job of playing the helicopter mom, it becomes apparent to the reader and especially to Araceli that she is not as suited to the role of full-time mom as she thinks she is. Maureen, who chafes at her husband’s inability to keep her and her family within the lifestyle to which they have become accustomed, makes an impetuous decision regarding the tropical garden. This decision sets the rest of the novel in motion.

This is a story about the City of Angels and to focus only on Scott, Maureen, and Araceli would miss the diversity and cluttered nature of this sprawling city.

Araceli soon becomes drawn, unwillingly, right into the center of the Torres-Thompsons’ marital drama when they flee their home unannounced after a violent domestic dispute, leaving her in charge of the two boys they leave behind. What she does next both plunges her and the rest of the novel into the very heart of Los Angeles. She goes on a journey with Brandon and Keenan, now left in her charge, to find their paterfamilias, a Chicano who was banished from the Torres-Thompson household, and leave the boys in his care.

Their journey through L.A. takes them from its Metrolinks and crowded boulevards to bungalow steeped-streets populated by the new arrivals from Mexico—people whose lives are far more similar to Araceli than the Torres-Thompsons’, despite Scott’s own part-Mexican background. Here, she encounters friends and strangers alike who help her and the boys along their journey, and as she does so we, the readers, are introduced to a Los Angeles / Orange County rarely expressed in literature. These are the back alleys and side streets where the marginalized and the forgotten dwell and create their own vibrant community.

When Scott and Maureen return home and discover their two boys gone, they involve the police, prosecutors, and child protective services which put both they and Araceli in the glare of public scrutiny. Here, Tobar’s background as a Pulitzer-prize winning journalist for the Los Angeles Times comes into fruition, for the latter half of the novel bristles with the sort of social satire that is often attendant when politics and media get involved.

But also, like a journalist, Tobar treats his subjects with an objective eye for detail. Characters such as Ian Goller, the assistant D.A. whose prosecution of Araceli is a political grab bag for a city overwhelmed by immigration; Olivia Garza, the social worker with the Child Protective Services who’s seen it all; and Janet Bryson, the single mom who sees in Araceli everything she blames for what has gone wrong in California, illustrate Tobar’s ability to portray figures that are neither heroic nor evil, who simply eke out their flawed lives within the helter-skelter environs of modern America.

Tobar writes in a clear and unencumbered style, one well suited for nonfiction and therefore effective in bringing to life a city whose charms are based more on myth than reality. He zeroes in on arbitrarily unique perspectives that most people wouldn’t question, such as the common street names in California when translated from Spanish are nonsensical (Paseo Bonita Linda is redundant), then laugh with the realization of how much of American culture can be silly, artificial, and inauthentic. Bounding from the point of view from one character to the next, he includes those voices that operate on the margins of the novel’s main plot and characters.

This is a story about the City of Angels and to focus only on Scott, Maureen, and Araceli would miss the diversity and cluttered nature of this sprawling city. His take on politics is dead on and the way in which the media, political hangers-on, and general public as well often exacerbate and exploit headline-grabbing stories for their own aims.

Finally, at the center of this joyous novel is Araceli herself, a brittle and uncompromising creation whose journey, both physically and emotionally, within the American landscape makes her a winning and memorable portrait of tenacity. Héctor Tobar’s Barbarian Nurseries is not only a great novel about Los Angeles, but is a great novel of our troubled and complicated times.