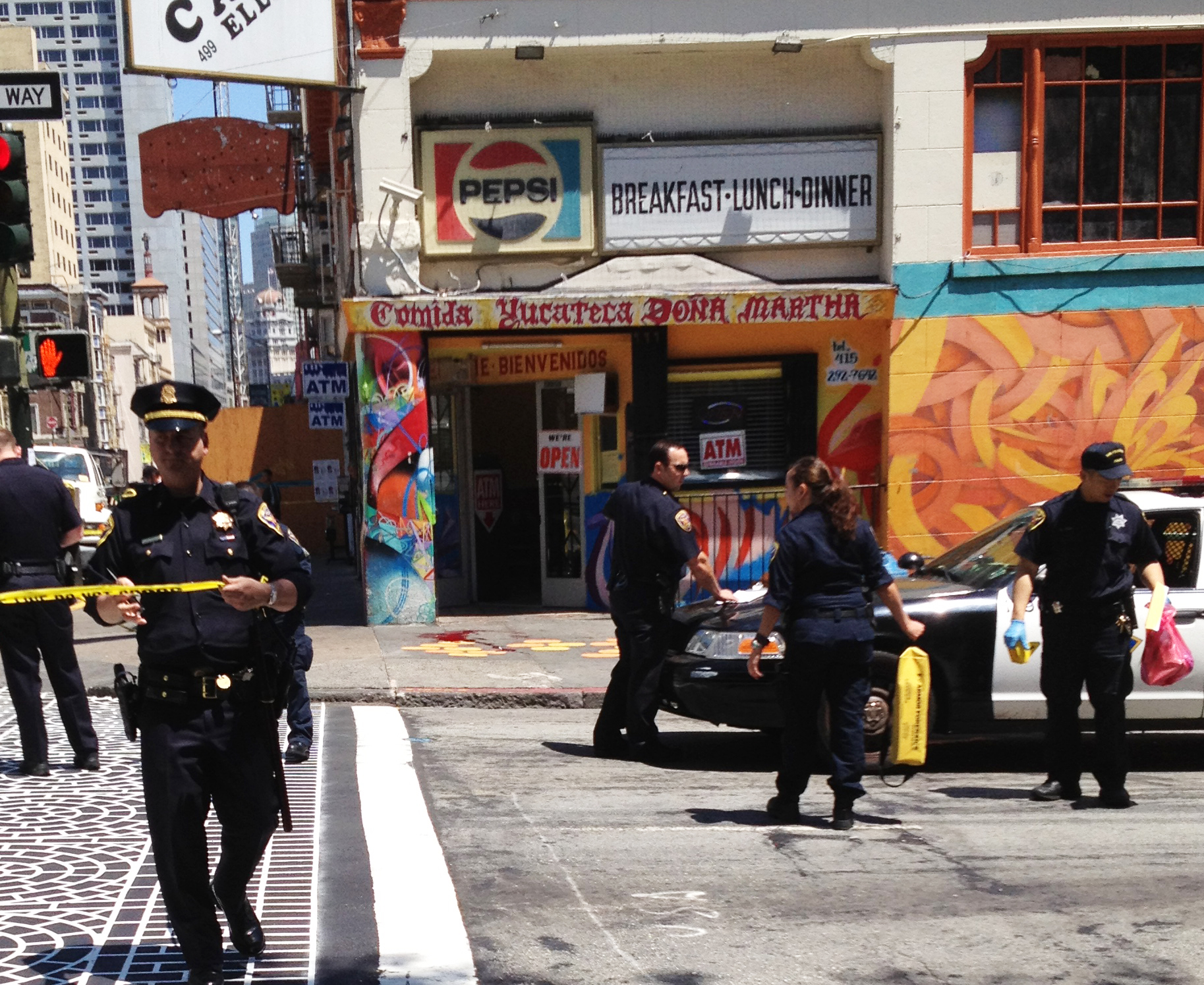 Does Anybody Know What It Was About?

Sometimes I get so comfortable in my routine here in this neighborhood, happy with the nice things about it and numb to its irritations, that I forget an important thing about the Tenderloin: shit goes fucking down here.

Earlier this week, I was a block from my apartment, buying parsley and oranges from the corner store on Ellis and Leavenworth, when I noticed a crowd and police tape surrounding the opposite corner. I joined the crowd and saw one of my neighbors, a stooped elderly black woman who lives on one of the upper floors. I asked her what happened.

“Three people were shot” she said. “Right on the corner there.”

Then I noticed in the bright sun, right in front of Comida Yucateca, there was a vivid puddle of blood. The police had the area corralled off.

A drunken-looking homeless man ducked under the tape and strode aggressively towards the crime scene. A cop with a neck like a bison called at him to back off, then threw him to the ground like a duffel bag when he didn’t stop walking.

In front of me, the journalists were showing up. It reminded me of what people find most indefensible and gross about the profession: here they were, butting in, wearing slacks and blazers, waving cameras and notebooks around, not talking to the people on the street, just the cops and some guy with a suit who showed up while I was observing.

I overheard a couple TL locals discussing it… “was that them who used to hang out on the corner over here?” … “yeah, it was them, they used to be over here every day” … “one of them got shot in the hand” … “one of them got shot with a hole this big” and the guy holds up both hands and makes a circle. The other guy asks if the shooters have been caught, the other says yes, the police have them in custody.

The cops remove the tape, cutting it and unwinding it. They look, well, kind of bored – this is just another workday for them. The journalists move in for close up shots of the blood puddle.

“Does anybody know what it was about?” I ask my neighbor.

A fireman stands in front of the restaurant. Water gushes out of the hose and washes the blood into the gutter. 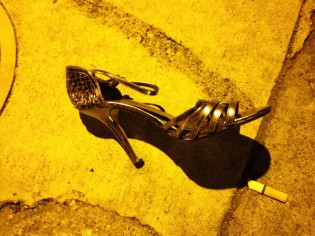 If you’re like me, a Tenderloin resident who minds their own business and is not homeless or a drug addict, it’s easy to think the street crime is something out there – in that parallel universe of the addict, something that surrounds you, but won’t directly affect you. But there are no guarantees that it’s true. It’s healthy to be shocked out of your complacency once in a while.

Most people in the Tenderloin are actually not homeless or drug addicts or mentally ill. They’re average people, working, raising families, paying rent. They’re the Muslim and Latino families and older gay couples and younger straight couples who live in my building. They’re the art students that spread up from the Tenderloin as it blurs into Nob Hill, the area known as the Tendernob.

The Tendernob is one of the City’s trendiest, up-and-coming neighborhoods, according to some. On Hyde and Ellis, I’m below it, but near it if you count it beginning at Geary. An hour before stumbling on the crime scene a block away, I dropped by Hooker’s Sweet Treats, a friendly hipster-magnet of a coffee shop / confectionary, and bought a salted caramel and latte for my wife, having a nice exchange with the guys working there.

This neighborhood is all about parallel worlds; it’s a layer cake of them, just like the buildings with their lives stacked one story after the other, 6 and 10 and 12 deep. You can say this area is harsh, or horrible, or trendy, or gentrifying, or incorrigibly bad, or fun, or vibrant or diverse or authentic. It’s all of those things, but it’s especially the contradictions between them.

The Tenderloin is living history. It’s an echo of the wild days of settler times, when San Francisco was a lawless, bloody port city. In 2012, it’s where the forces of gentrification that have bathed the city are stopped cold by sheer force of body fluids – blood, piss, puke, human waste, it’s all on these sidewalks.

There’s something terrifying and awesome about the fucked up nature of a neighborhood that all the money in the world can’t seem to sanitize. I’m amazed by the sheer stubbornness of the Tenderloin. For those who live the street life here, the tragedy is not that a great city has some blight to it – it’s that their lives have led them to a very dark place. 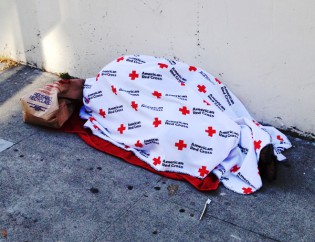 Homeless in the TL: asleep on Eddy Street (above) and Ellis Street (below). 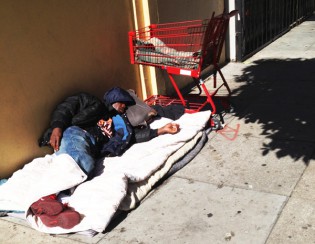 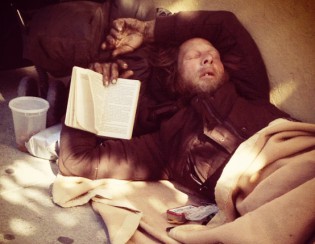 A few weeks ago, there was another crime scene I came across, further up Nob Hill and smack in the Tendernob – around Post and Hyde. A crowd, police tape, the sound of sirens, cops standing around blocking the area, talking to each other, sipping coffee. It was at night.

I asked a young man in the crowd what was happening.

“This guy barricaded himself in the building and lit it on fire,” he said. “He was wanted for murder, got into a shootout with the police. I think he shot one of the police.”

Pushed beyond the brink. I imagined a lone gunman crouching in a living room, a flaming couch turned up against a window.

Later that evening, I was at the corner store on Hyde and Ellis buying a soda, and mentioned the scene to the guy at the counter.

We shake our heads, because there’s no real way to respond to this insane violence. We could lamely wish the cops would come clean it all up, but by the time the cops are involved, it’s already too late. The media comes along and rounds up the available facts, which clarifies things but usually reveals nothing about the cause of the events. It turns out that the shooter from Ellis Street wasn’t actually caught by the police and wounded, not killed, his victims. The homicide suspect taken out by the police did not succeed in shooting one himself.

We read the news reports, but we still don’t know what it was really about.

Sirens, I’m always hearing them. Some days it seems like every hour. My daughter, just two weeks old, seems unbothered by the noise. I know I won’t live here for too much longer.

San Francisco feels like a very cold place on a bad day in the Tenderloin. A place they call “Sucka Free” because there’s no place for suckers. People haven’t gotten the message, though, because it seems obvious that they came here for sanctuary, for the promise of a city that will let you be yourself, no matter what kind of freak you are.

I don’t know how San Francisco can be kinder, but I want to believe it’s possible. It seems naive to say that if more San Franciscans, who often are such a wealthy and privileged bunch, could care more about the down-and-out among them, instead of just complaining about the mayhem they create, things would be better.

Here’s the thing: I’ve had my car window busted, I’ve had weird people bother me, I’ve had a wheel stolen off my bike. But it’s not me sleeping on the sidewalk, and I wasn’t shot this week. The primary victims of the mayhem in the Tenderloin are the street individuals themselves.

Perhaps stupidly, I still don’t believe this is a very dangerous neighborhood for myself or my family. As it happens, the worst scare we’ve gotten was when a young college-educated woman drove her fancy car into my wife and dog (luckily at extremely low speed).

In the ‘Loin and the Tendernob, the truly frightening thing is not the crime you’ll be targeted for. It’s what might hurt you just because you’re in the way when it happens, when a human tragedy in progress careens in a random direction. That’s a reason – if you needed one – for us all to make sure that it’s easy for anyone who wants to get out of the street life to do so.

Can I get an amen?