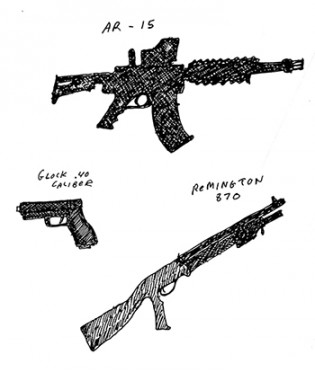 Last week, a macabre scene blurred cinematic and real violence; this week, we ask ourselves the nature of our sickness – why is it that America suffers these spasms of indiscriminate and irrational killing?

The scene itself is confusing to describe, seeming to fold back in on itself: at a midnight movie showing of a film about masked vigilantes and murderers, where costumed moviegoers mimicked the on-screen persona, a costumed killer stepped forward—it’s no hyperbole to say almost out of the screen—and unleashed a torrent of violence, tear gas and bullets, killing 12 and wounding dozens more.

The President’s remarks in response to the deaths seemed banal, inadequate (‘my kids could have been at the movies’), perfectly middle-of-the-road and apolitical. The words of a man on the campaign trail.

There’s an air of defeat, even in the stream of liberal blogs pleading for gun control or bans on assault weapons following the shooting. We know the debate is at a stalemate; that for now, a combination of the gun lobby’s influence and American culture’s belief in the importance of firearms have us at a political standstill.

There’s a curious thing about massacres like Colorado’s Batman shooting, and the one in Arizona that nearly killed Gabby Giffords—they are the substance of terrorism without the ideology. And though they may be without a political agenda, they are acts with a political impact and in a political context.

So we ask why, and find no steady ground, and turn to our pre-packaged answers and explainers. Was this tragedy to be laid at the feet of a society that permitted it, and is willing to tolerate it? Or was this the action of an individual, someone who had given in to their mental illness and hate (or, if you prefer, the devil) before murdering his neighbors?

Of course these were the actions of an individual. There are many Americans who suffer from schizophrenia, bipolar, and other disorders. Very few of them give way to their most violent impulses and fantasies. James Holmes did, and for that he is a contemptible human being.

And yes, our society produced this crime. Yes, our popular culture celebrates violence. Yes, our health care system is in chaos, and mental illness often goes untreated or unrecognized. Yes, youth unemployment is dire, and is right now stunting careers and triggering disillusionment.

And most obviously and most contentiously, yes, our country is staggeringly liberal when it comes to permitting military-grade weaponry to pass into the hands of its citizens.

Gun control is not only a question of the gun lobby’s money, and their willingness to sell arms to whoever, whenever, wherever—regardless of where they end up; in the hands of Mexican drug cartels, or in a theater in Colorado.

It’s also a question of culture: A nation’s romantic attachment to the idea of armed struggle and access to firearms being linked with its civil liberties. Conservatives are more likely than those on the left to go in for this, but I have also talked to my share of lefties who feel strongly about gun rights. This is probably especially true in the Western states.

I believe this idealization of firearms is something Americans need to take a hard look at, and I have my own theory why we’re so complacent and/or out of touch with reality. With the exception of urban minority communities, our civilian public hasn’t been on the receiving end of high amounts of gun violence since. . . when? The Civil War?

When people have enough of gun violence—that is, being on the receiving end of it—they do ultimately get sick of it, and willing to talk about reasonable restrictions on the access to deadly force.

The only question for us is: how much will it take?