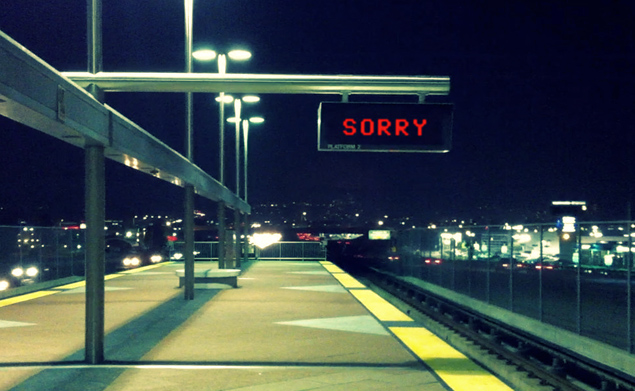 It’s not only in Cairo and Wisconsin that Facebook is fueling social movements for change. Here in the Bay Area, a Facebook campaign for extended hours on the BART system has steadily gathered momentum—and with the recent announcement of a pilot program to extend late-night hours, BART is clearly paying attention. With a following of 22,838 (at last count), and many of them active participants in the discussion, “Make BART Trains Run 24 Hours” has become something of a spontaneous uprising.

Fueled by years of frustration from BART riders from around the Bay Area, the Facebook page’s users present many arguments for late-night service: facilitating nightlife, cutting down on drunken driving, making life easier for travelers coming from and going to SFO, and providing a service for late-shift workers who commute on the trains. Calls to appear at public meetings and contact BART officials are frequent, as are pictures, reports on BART’s day-to-day performance, and polls—on when riders would use extended hours the most, how BART should be best using their budget, and other topics.

It helps that there’s at least one very active moderator behind the page: Nate Payne, a former candidate for the SF Board of Supervisors in the district representing the Tenderloin. Payne started the Facebook page in January 2010, and it soon exploded in popularity. As moderator, he uses the page to push out core arguments and educate participants about the the obstacles to 24-hour service—primarily, the need for more infrastructural “passing track” which would allow for maintenance to be conducted while service continued uninterrupted.

This February, the BART 24 page featured t-shirt contest, inviting local artists and designers to contribute their fresh ideas to lend a visual icon to the cause. Page followers were invited to exercise their digital democracy by voting for the winners, and the top voted designs are now available for sale directly from the page.

Recently, one of BART 24’s admin’s (probably Payne) sat down with three BART directors—BART board President Bob Franklin, Tom Radulovich and James Fang. Afterwards, it was reported on Facebook that BART staff will be bringing a full report to the board to show what it will take to extend hours of service. Days later, after a BART board meeting on April 14th, media sources reported that Franklin was pushing forward plans to extend service by an hour on Friday nights. Service would start an hour later on Saturday morning, and studies would proceed to examine the impacts. Franklin uploaded a YouTube video of a KRON 4 news segment announcing the late night plans—and next to the video clip, he wrote that “the inspiration was from the Facebook page ‘Make BART Trains Run 24 Hours.’”

The digital uprising hadn’t exactly upturned the BART system—but it had begun to tilt it.

Following is a sampling of the voices of participants on the Facebook “Make BART Trains Run 24 Hours” page.

Wow, this is fantastic news! I hope they extend the hours on Saturday night as well, because I usually go out on that night more often than Fridays.

BART should run 24 hours a day, every day. We can easily become the NYC of the West in terms of public transit. We’re not spread out as much as Los Angeles.

BART trains should run until at least 30 minutes after last call at bars in all major Bay Area cities serviced by BART. Think of how much drunk driving could be avoided if bar patrons had easily accessible public transportation as an alternative.

If you don’t live in SF there is no way to take BART to SFO if you have a 6am flight. I end up having to pay almost $40 for a shuttle. There are other reasons for needing BART 24 hours a day other than getting home from bars.

BART should consider having all night service, at least on certain holidays where they know there will be a ton of drunks out, like Cinco de Mayo and Labor Day.

The simple solution is to have them run one train on the hour. They can still clean trains and only have skeleton staff. We pay too much to ride BART to not have that option.

If BART ran longer, not even 24 hours (I’d prefer 24 hours) but past last call, it would decrease likeliness of drunk driving. Also, more people would be willing to check out both sides of the Bay. I live in the East Bay and find myself not wanting to go to music shows in The City as shows generally end around 2 a.m., when BART service is already long over, so I’d be stuck with my bike in The City. And no, I’d rather not ride a packed night owl bus, hoping the bike rack has a spot left for me.

Creating a second track [to enable maintenance around the clock] may not be easy, because of the varying levels… sub street, on street, above street—but it sure should at least run 24 hours on weekends—it would soon pay for the extra personnel costs.

In Seoul, South Korea you can travel anywhere for one dollar one way, the subways run 24 hours, and are super efficient. Why can’t BART do the same here?