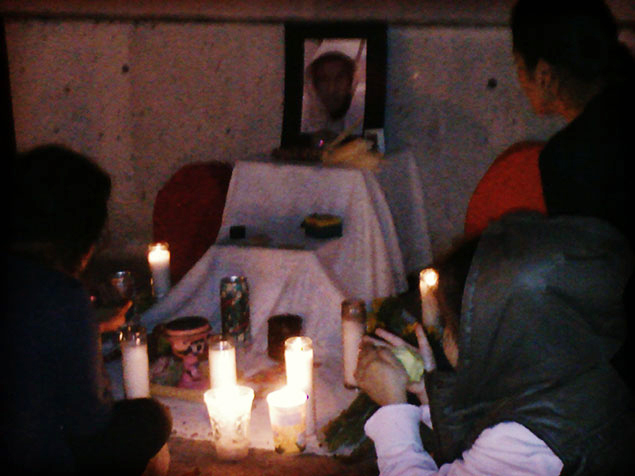 ORANGE COUNTY REACTS TO TRAYVON MARTIN, GEORGE ZIMMERMAN AND ITS OWN HISTORY OF TRAUMA

Tuesday night a gathering of over 100 protesters marched through the downtown section of Santa Ana to protest the non-guilty verdict handed down to George Zimmerman, for the shooting of 17-year old Trayvon Martin in Sanford, Florida last February. Over the past few days following what many see as the latest in an American tradition of ongoing injustice towards people of color, protests and memorials have sprung up throughout the country, not only in Florida, but also New York, Oakland, Chicago and Los Angeles.

Traditionally, such cities have been ground zero for demonstrations against civil rights abuses (specifically, the killing of unarmed black men by the police, as in the cases of Oscar Grant in Oakland and Sean Bell in New York). Orange County, at least in the large popular consciousness, is seen as the opposite of, perhaps even corrective to, its neighbors to the north such as Los Angeles County and the Bay Area. A wealthy, red enclave in a blue state, the image of Orange County has been shaped by television shows and films which serve as postcards for its beaches, fine dining restaurants and theme parks.

In truth, the demographics of Orange County are changing as fast as other parts of America, and over the course of the last few years it has seen a rising tide of resentment towards civil rights abuses that has, at times, spilled over into violence—such as the Anaheim riots in reaction to the fatal shooting of two young Hispanic men during foot chases with police over the course of a single weekend, which rocked the city almost exactly one year ago. 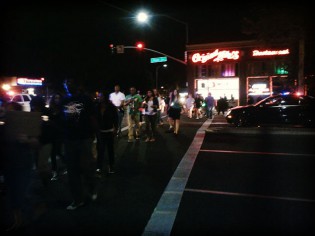 The march for Trayvon Martin produced no such violence, from either the demonstrators or the police. The event began at 8:00 PM at Sasscer Park on the corner of Ross and Fifth, which lay directly across the street from the Ronald Reagan Federal Building and State Courthouse.

When they voiced their concerns, many of the demonstrators, the majority of whom were black and Latino and around college aged, often branched out from the Zimmerman verdict into anger towards what they see as the corporate-backed power structure upon which the current state of America rests: one in which black and Latino youth are judged guilty simply for walking down the street, while wealthy white men can knowingly commit fraud to the tune of billions of dollars, laying waste to whole communities, and not even be prosecuted.

It seemed darkly appropriate that the protest march circled around downtown Santa Ana past a federal building named after a man who many see as the figurehead for said power structure. The patrons of the section’s bars and restaurants, who sat or stood in the back patios as the march passed, kept their eyes lowered to their cocktails and beers.

The police maintained a heavy and visible presence, but at no point sought to detain or engage the crowd, even as they marched through crosswalks during red lights, chanting at the stopped cars and patrol cruisers: “Our Streets! Our Streets!” Other chants included “No justice, no peace, no racist police!” and “The people say: Guilty!” Many of the signs displayed by the marchers struck similar tones, from ones calling George Zimmerman a terrorist to a few that simply said: “FTP”.

Despite the overwhelming tone of anger towards the authorities, no violence or property damage occurred and no arrests were made. The march concluded back at Sasscer Park at around 9: 20 PM, where the crowd gathered with candles and listened to short speeches from community organizer Joese Hernandez and Gwynne, a local African American woman who wished only be identified by her first name.

In his impassioned speech Hernandez congratulated those gathered on keeping peaceful while displaying their force. He talked not only about Trayvon Martin, citing the case of Marissa Alexander, the African-American Florida woman cited the same Stand-Your-Ground laws which Zimmerman did and yet received a 20-year prison sentence for firing a warning shot at her allegedly abusive husband.

Hernandez also mentioned the upcoming anniversary of the two Anaheim shootings, and an upcoming demonstration in support of a retrial of Jesus Arturo Aguirre, an East Buena Park youth who received life in prison for aiding and abetting a gang-related attempted murder, but whom his parents and many in the community believe to be innocent of all charges. The demonstration ended with indigenous song and dance. 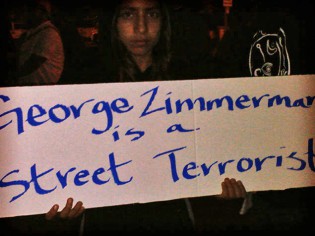 After his speech, as the crowd began to disperse, I talked to Hernandez about the state of affairs in regards to civil rights abuses in Orange County, and the public response to them which seems to be approaching the same level of reaction that the citizenry of Los Angeles and Oakland are used to. He cited the long and storied history of racism at the highest levels of Orange County’s power structure, which included many members of the Klu Klux Klan among the founding city council’s leadership.

“We’re still dealing with those remnants. But the demographics are changing: people of color are having more of a voice; people are starting to stand up and fight for justice.”

The fallout over the slaying of Trayvon Martin and the acquittal of George Zimmerman is not done with and there is no telling what the larger ramifications of the case will be in regards to American race relations going forward. Whether this leads to a sea-change for good or ill, or, just as likely, eventually fades away, changing nothing, everyone will have to wait and see.

One thing seems to be certain however: Orange County is going to be one of the new nerve centers, in the larger public spotlight, when it comes to the collision of power and abuse, and the fallout it engenders.