In “Fruitvale” Oscar Grant Gets Attention at Sundance 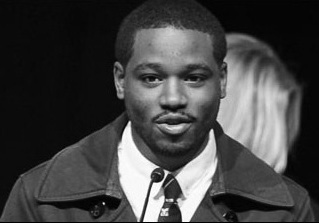 Bay Area residents are all familiar with Oscar Grant—the 22-year-old black man shot in the back by a BART police officer on New Year’s Day, 2009—but the rest of the country is about to get a little more familiar with him. Fruitvale, the debut film by Ryan Coogler is getting major buzz at Sundance this year, and it’s not a documentary; all too rare for a film tackling a social issue like police brutality.

Coogler had very specific reasons for wanting to make a film about Oscar Grant as a drama, not a doc.

“I have a theory about docs,” he told Democracy Now!‘s Amy Goodman, “that it’s very difficult to break the barrier … of someone having a camera in their face, you know what I mean? People act differently when they know they’re being filmed. So the best docs often take a very long time to make, for people to kind of get used to the camera being around and begin to be themselves again.”

With the limited time he had to make the film—which was shot in just 20 days on location in Oakland—Coogler felt a dramatic approach could better reach the cinematic truth he was reaching for. And he felt a sense of urgency: “I really wanted to get this story out there ASAP, you know, because these things keep happening.”

In the years following Grant’s death, he became an iconic shorthand for police brutality and resistance to the Bay Area’s status quo. Posters with Grant’s face were wheatpasted across the East Bay, and demonstrations both peaceful and violent erupted in response to the event and following court rulings in the case against Johannes Mehserle, the BART officer who shot Grant. The Occupy Oakland movement dubbed Frank Ogawa Plaza, in Downtown Oakland, “Oscar Grant Plaza” in 2011.

But Coogler’s film seems aimed at restoring the everyday humanity to a figure who had become a symbol.

“I wanted this film to work in a way that lets you spend time with Oscar, and you see him as a full human being,” Coogler said.