“The Mystery of Flying Kicks” Cracks the Code on Sneaker Tossing

Ever wondered what those shoes dangling from the telephone wires mean? The results of sneaker tossing are a common sight in most American cities, and—as revealed by the awesome mini-doc “The Mystery of Flying Kicks”—a phenomenon found around the world.

I’d heard the ‘signifies a place where drugs are sold’ explanation in the Bay Area. But as the film documents, the hanging shoes have many stories and significations, and it all depends on who you ask.

For instance, in Los Angeles the kicks are said to commemorate fallen gang members, while in Sydney, they’re said to mean a kid lost his virginity. Are the shoes like an urban rorschach blot, in which a city sees itself? Or a form of expression that takes on various meanings depending on the context (like graffiti)? The film pulls together dozens of oral accounts and lets the ambiguity ride.

Just as intriguing as the film itself is how it was made. The filmmakers, Matthew Bate and Viron Papadopoulos, used an “online call-out and a phone message bank” to gather their source material, creating a film “made entirely from donated photographs, phoned-in theories, video, vlogs, and animation.”

Writer/Director Matthew Bate is a filmmaker based in Adelaide, South Australia. Collaborators on the film include the Skewville brothers of New York, street artists known for their wooden shoes, and sneaker-obsessed internet rapper Kim D. 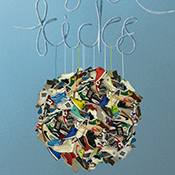