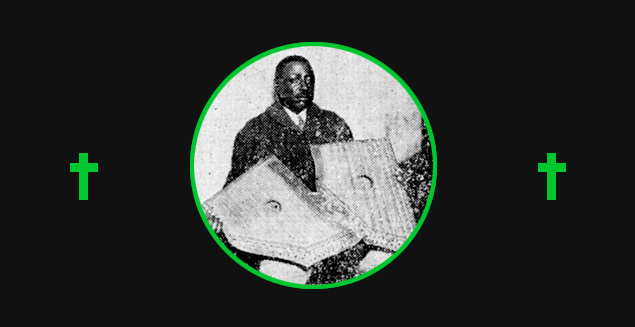 The music of Washington Phillips is sublime and hypnotic, it floats down, inflected with great sadness and pain, as it reaches the earth, knowing what the earth is. Washington Phillips came from an America that remembered slavery, and his recorded voice and string playing scratch a vivid portrait out of the dust, of a rural South drifting further from memory.

“I don’t mind dying ’cause I’m a child of God,” Washington said. And as with everything he said on the 16 recorded songs from 1929 that are his legacy, you believe he meant it.

The mystery that shrouds this man compounds the stunning beauty of his precious, few recorded songs. First of all, there is the instrument he played, hovering over the wordless passages of “Lift Him Up That’s All” and “Mother’s Last Words to Her Son.” That bouncing, ringing, jangling, sad-sweet sound, with something otherworldy about it; the man’s only accompaniment to his voice, on almost all his songs.

Was it a harp? A zither? A hand-made instrument devised by Phillips alone? We will never know for sure. All we know is that it was shaped like a large box of candy and could sound, simultaneously, like a hammered dulcimer, a honky tonk piano, and an autoharp.

His voice was an even greater instrument. The strength, fragility, purity and harshness of his voice are the most refined, delicate kind of blues, aching and flowering with that ache. And when his voice lifts into midair at moments like the falsetto hummed chorus of “I Had a Good Mother and Father,” it is enough to make you hold your breath.

He was born in the 1880’s, lived in rural Texas and died unknown, with no dream of the legend he’d leave behind. Depending on which story you believe, Washington Phillips left this world as a young man, suffering from tuberculosis in a sanitarium, or as an old man, of head injuries after falling down the stairs at a welfare office.

Since so little is known about him, we are confined to finding out about Washington Phillips mainly by listening closely to his songs. And what I keep wondering is this: why does a man so sure he’s saved by God sound so sad?

Is there something ecstatic about Phillips’ rejection of this world? Did he feel like he already belonged to the world of the dead? Was his joy at lifting his spirit to the Lord one and the same with his bitter knowledge of the pain and sorrow that haunt the living?

As far as I can tell, there’s little in Phillips’ gloomy, moralizing gospel songs that would place him in the grand, prophetic tradition of African-American Christianity that links the suffering of American slaves with the Biblical Israelites and in this subtext, reads liberation. Phillips only mentions the Black church in order to condemn it for sectarianism in “Denomination Blues.”

What I hear in his music is an embrace of what I call Christian Nihilism: a belief in the hereafter that willfully diminishes the reality of earthly life. This is not a position I advocate at all, in fact I’m against it. But I think it’s given us some great art and is an understandable emotional response to bleak and hopeless circumstances. It’s also, sometimes, the spiritual position of a rebel or a misanthrope—individualistic, set against community and society.

This basically negative, death hungry stance is, in my opinion, exactly why there’s nothing simpering or saccharine in the gospel music of Washington Phillips. It’s not the Christianity of televangelism and the American religion of self-help and material gain through prayer. Stark and simple as a Russian icon, his is the old fashioned, world-damning Christianity of midnight revivals, river baptisms, and rotting clapboard churchhouses.

Phillips eyes were firmly fixed on heaven—which is to say, on death, and the bodiless existence beyond it that he craved. He seems as uninterested in earthly salvation and wordly justice as Saint Francis would have been. And he was probably as poor as any saint has ever been.

The fascinating and scant glimpses of Phillips’ life that are available can be gleaned from Michael Corcoran’s 2002 article for The Austin Statesman, Exhuming the Legend of Washington Phillips. Corcoran’s best guess is that Washington Phillips eked out a living as a “jack-leg preacher” who, without a church, “roamed around” looking for a place to hold court. In his hometown of Teague, he was better known for the mule cart he sold cane syrup from than for his musical genius.

I can’t help but fill in the picture and imagine him performing his transcendent music under a big, half-stormy sky in front of a naked and gnarled oak tree. But his music is universal. I discovered his music while living in San Francisco’s Tenderloin, listening while looking four stories down to the intersection where the junkies and the prostitutes and the meth addicts wandered, destitute, half-aware of their surroundings. And his music seemed to belong there as much as anything could. 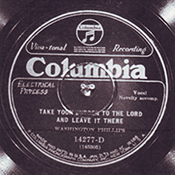 Washington Phillips is the embodiment of what Greil Marcus called the “Old, Weird America”: the twilight land of arcane field recordings and ancient 78 rpm records coveted by the likes of underground cartoonist R. Crumb. To me, it’s also a musical counterpart to great Southern art like the literature of Faulkner and Flannery O’Connor.

It’s remarkable that these handful of recordings by an obscure, unknown rural genius have survived as well as they have. Ry Cooder covered some of his songs in the 1970’s, leading a revival of his music that included covers by Will Oldham, Gillian Welch, The Be Good Tanyas, Phish, and Mogwai. His music has been sampled by Atlas Sound, and used as a soundtrack in films by Werner Herzog and others.

Since I started listening to him, I hear traces of Washington Phillips in all sorts of places, from the Velvet Underground to Prince. They are probably not real traces in any direct sense, and only an aesthetic linking in my imagination. But some of them are probably more than that; they really are the faintest of echoes of influence and sensibility coming down from the days of pancake-thick 78’s played on an old Victrola, and this utterly unique and original artist who made a handful of recordings in the 1920’s—and then vanished from the history of recorded music.

Listen to some Washington Phillips songs here: Lift Him Up, That’s All, Mother’s Last Words to Her Son, I Had a Good Mother and Father.

His music has been reissued by Yazoo Records and is available here, along with other fine recordings.