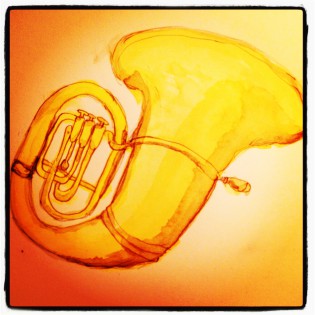 “All they took was the tubas,” said music teacher Gonzales; his band room had been robbed but valuable items (computer, clarinet) bypassed save for one high-value horn. NPR reported earlier this year that tuba thefts from high schools have caused police to conclude that they were being snatched and sold on underground market to tuba-hungry groups playing the popular banda music.

The report inspired East Coast trend-envy at Vice and attempts from Salon and others to inform the public about this “banda craze” apparently responsible for the thefts, emphasizing the centrality of the big bass horn in this music style. Salon claimed that the “tubist is to banda what the lead guitarist is to rock and roll” and evoked cash stuffed into tuba bells by satisfied fans.

LA Times writer Sam Quinones pointed out that the tuba is a high-value item running between $2,000 and $5,000, also adding that the thefts are isolated to a small part of southeast L.A. County, making it more of a micro-trend than the “social epidemic” described (half-seriously) by a Vice writer.

Quinones knows a thing or two about banda and norteno music, having written about narcocorrido legend Chalino Sanchez in his excellent book True Tales from Another Mexico.

Tuba thefts aren’t the tuba’s first claim to street cred, and journalists and bloggers aren’t the first ones whose imaginations have been sparked by the outlaw intrigue of banda music (see also: norteña, ranchera) and its subgenre, the narcocorrido (drug ballad).

Hugely popular in Mexico and in U.S. Latino communities, narcocorridos sometimes features lyrics about the exploits of dope smugglers and gangsters; other songs cover the struggles of everyday immigrants.

In order to “get” this phenomenon, North Americans need look no further than their own fascination with rap music, which likewise has lyrics populated with tales of rags-to-riches glory, battles with the law, and the hardships of being down-and-out. Or, for that matter, country music songs about bootleggers running “white lightning” through the hills of Appalachia. You may wondering by now if someone’s thought to mix tuba-heavy banda with hip-hop: the answer is yes.

As for L.A. schools and their tubas, I’m betting that they’re keeping a closer eye on them these days. And if there’s a hidden upside to the unfortunate thefts of school tubas, it’s probably for young tuba players’ reputations. It’s unarguably better to play an instrument that’s known for being the one thieves want to steal than one that’s famous for sounding like someone farting.