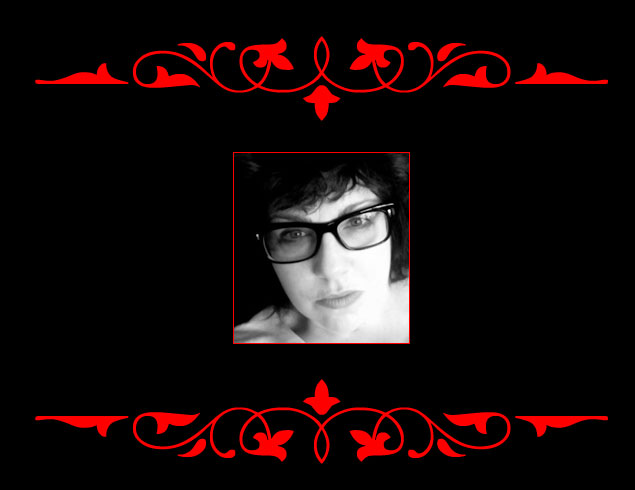 Dark, evocative and spare, Donna de la Perriere’s poems do more than play with language; they transmit a mood. In addition to writing and publishing, she has an active life in the Bay Area literary community as a teacher of writing and as curator of the annual Bay Area Poetry Marathon.

Your poems often seem located in a dark, mythic South. Where are you from originally and how does a sense of place affect your work?

I was born and raised in Athens, Georgia, and like everyone else, I think I feel relatively haunted (in both good and bad ways) by the place in which I grew up, and—yes—like all landscapes of childhood, the Georgia of my poetry is a place that’s partially real, partially mythic.

The South as I knew it is a very strange place—very lovely in lots of ways, very damaged and damaging in lots of others. To me nowhere else in the world is as physically beautiful as Georgia is. And even though I have a lot of complicated and mixed feelings about it, nowhere else in the world gets to me the way it does. Seeing it makes my heart hurt.

The lush spring-times are probably when it’s at its “prettiest,” but I especially love it in the winter when everything is stripped down to bare bones. If you’re off of the interstate, you ride by all these empty fields and abandoned houses and junked car yards and pine forests. It’s a deeply secret landscape, I think; you always get the feeling that it only gives up bits of itself—that you’re only being allowed to see a tiny part of what’s actually there.

And I think that affects my work in pretty much every way one can imagine.

How long have you lived in Oakland, and how do you feel about Oakland and the Bay Area—in general terms and in contrast to other places you have lived?

I’ve lived in Oakland for eight years now. I love the Bay Area—not necessarily the way the architecture or landscape looks or feels, so much as the people who have gravitated here. I’ve made some of my very closest, most beloved friends here—and, strangely, some of my closest friends from elsewhere have ended up living here. Also, for the sort of poetry I write New York and San Francisco are probably the best places to be in the country, and though in many ways I’m probably essentially more of an eastern-seaboard type of gal, I think San Francisco is by far the better place for me. I feel very—really deeply—at home with the literary community here; some of my favorite writers and my favorite people in the world have landed in the Bay Area. So being able to live and work here among them just feels like I’ve won the lottery.

The lure and atmosphere of crime and transgression seems to haunt your work. How do you feel about crime and its connection to art?

I’m teaching a class this semester called “Mad Girls, Bad Girls: Writing Transgressive Female Subjectivity,” so clearly it’s a topic that interests me. Art that explores transgression—by which I mean a lot of things including “disruption” and “questioning” but mainly “mystery”—interests me because liminal spaces (where definitions, categories, even reason to a certain extent, break down) really interest me. Let’s face it: actual, honest-to-God mystery makes human beings very, very nervous—which means it’s probably pretty important.

But then, of course, there’s another, perhaps more personal way in which the idea of crime interests me which has more to do with what it means to be human and responsible and flawed in the deepest possible ways. I think one of the most succinct things I’ve said about that has probably already been articulated in the last section of “Return to the Scene”—the long prose poem from my first book. 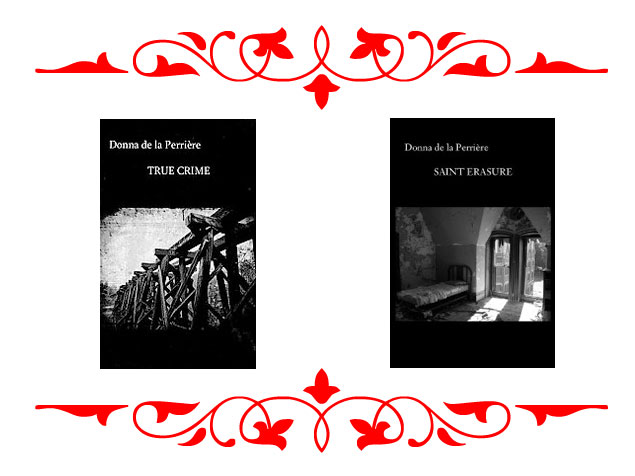 Describe how your two collections of poetry, True Crime (2009) and Saint Erasure (2010) came about, and your process in assembling them and working with the publisher.

For quite a long time, I thought I was writing one book. Actually that’s not entirely true: for quite awhile I was just writing poems, then I thought I was writing one book. And then later I figured out that the poems seemed to revolve around one or two larger ideas or arcs that seemed distinct from one another. At that point the fact that I had two separate manuscripts became clear to me.

After a reading in New York a few years ago, Ed Foster of Talisman House Publishers asked me to send him a manuscript, so I did, and he was kind enough to accept it and publish it, then he took the next one and published it also, only a year or so after the first was published. So I’m very lucky in having a publisher who wanted the work and was just staggeringly generous to it. As for my process in assembling the books themselves: that involved a lot of spreading poems out all over my living room floor and moving them around into one order and then another and then another, ad infinitum.

How and when did you begin writing?

The truth is I don’t remember. I was a big reader as a kid (I learned to talk before I learned to walk, so says my mother). I was the kid who wrote stories and poems from the point of view of 19th-century school children then buried them in my backyard in the hopes that some person from a future generation would find them and read them. You know, that too-much-imagination kid.

Who and what are your inspirations as a writer, and who do you most love to read?

One writer who always comes to mind when I’m asked this question is CD Wright, who is an utterly exquisite poet. She just floors me every time, and I was so thrilled that she won the National Book Critics Circle Award in poetry recently—along with another one of my favorite writers, the brilliant Jennifer Egan, who won in fiction. Both Wright and Egan are the-real-deal geniuses as far as I’m concerned—and this year’s NBCC award winners are proof that, every once in very long while, the people who actually deserve to win things do.

Lately I’ve been reading about fractals and radiolarians and neurology, as well as reading Paul Wallace’s wonderful science and religion blog at PSNT.net. And I’ve been watching Brent Green’s film Gravity Was Everywhere Back Then, which is amazing.

What is the Bay Area Poetry Marathon and your role in it, from its beginnings to plans for the future?

Well, I’m the co-founder and the current curator. It’s a reading series that occurs each summer and involves seven to ten readers per night; everyone from the distinguished poetic elder to the exciting emerging poet reads for ten minutes. Most BAPM readers are from the West Coast, although every summer we also get readers from the East Coast (New York, Boston, Providence) as well as from Denver, New Orleans, Boulder, etc., and most of the readers tend to write in more innovative/”experimental” veins, although I like to mix things up as much as possible.

The series began as a single weekend-long event in Boston back in 2001. When I was in grad school, we used to do an annual all-night reading of Frank Stanford’s book-length poem, “The Battlefield Where the Moon Says I Love You,” and I remember that as being a really magical thing. So I want to replicate that kind of experience in a slightly less physically draining way, I guess. There’s something that happens after you’ve listened to a couple hours of nothing but poetry: you start to experience language in a different—and quite wonderful—way. Plus it’s just fun to get that many poets in one room together.

In addition to writing and curating, you’re also active as a teacher of writing. How does teaching fit into, complement, or stand in tension with your creative process?

Teaching is wonderful. When I started teaching in the mid-‘80s I wasn’t really sure that I liked it—possibly, at least in part, because I was so close in age to the people I was teaching and possibly also because I was afraid it might somehow take something away from me—time or focus or who knows? Now I know better, and it is one of the things I am most grateful for in my life.

I’ve been teaching on and off for the past twenty-five years or so with a few spates of doing other things in between: working at the John Hay Special Collections Library at Brown University—where I went to grad school—for a year, at the wonderful Grolier Poetry Bookshop for several months when I first moved to Boston in the early 1990s, and at two Boston publishing houses for a few years in the mid-‘90s.

For the past eight years I’ve been teaching in the MFA and undergrad creative writing programs at both California College for the Arts and San Francisco State University, and it’s a joy—a real gift, and one that I hope runs both ways. There’s just nothing quite like working with emerging writers as they find ways to challenge themselves and grow as makers—to become more rigorous, more engaged, smarter, braver.

What are your current plans and projects—what are you working on now?

I’m working on a third manuscript of poems at the moment. I’m not very far into it yet—probably around a quarter of the way in—but writing for me has always been a very slow process. I’ve finally learned, at least to some extent, to just trust it to happen.

Most recently I finished a long poem that I’ve been working on for what feels like forever. I’ve been working actively on it for around three years, but I think I wrote the very, very first version of the material around three decades ago. Most of them don’t take nearly that long, thank goodness, but it was a poem with pretty difficult subject matter as well as a certain degree of formal complication, so it felt hugely gratifying to finally finish that.

Right now the working title of the third manuscript is Second Person. It refers to the second-person pronoun in English—which, of course, is “you.”

*AN EXCERPT FROM THE PROSE POEM “RETURN TO THE SCENE” FROM DONNA DE LA PERRIERE’S FIRST BOOK, TRUE CRIME

I know a few things. I know there are crimes. That there is often evidence at the scene of the crime. That there is, perhaps, only evidence—conclusions, as any decent mystery novel will show you, being always another matter.

I know that we all have our stories. I know also that there is no such thing as solid ground, that innocence is rarely what it seems. That, in fact, if you think you have all the time in the world—to mend errors, to make it all up—you are wrong; that some things are, in fact, irrevocable. And I know that often, at the scene of the crime, or later, we may begin to suspect that we were involved in some way. That we perhaps held a vital but completely forgotten piece of evidence, or might have misplaced something crucial. That this entire thing may, in fact, after all, be more dangerous than we initially expected. And that there nevertheless, and always, exists a nagging doubt, some peripheral vision of the mind, that perhaps we are, or have been, the real killers. In the end.

All of us. The bottom line.