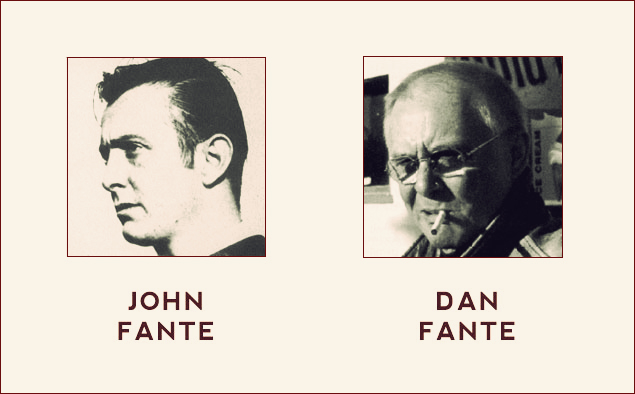 Los Angeles,
give me some of you!
Los Angeles come to me the way I came to you,
my feet over your streets you
pretty town I loved you so much,
you sad Flower in the sand
You pretty town!
These words from John Fante’s most famous novel, Ask the Dust, are written in red at the entryway of Skylight Books, Los Angeles’s independent book fixture. On September 2nd, Skylight hosted a reading with Dan Fante, whose memoir Fante: A Family’s Legacy of Writing, Drinking and Surviving is newly published by HarperCollins. If there was any remaining doubt of Skylight’s reverence for Fante and his kin, their Facebook page declared on the day of the reading, “John Fante is sort of the patron saint of Skylight Books,” and Ask the Dust is their most popular seller of all-time.

Ask the Dust was published in 1939, and brought Fante very little money or regard. Charles Bukowski is credited with reviving Fante’s name in the late 1970s, when he insisted that Black Sparrow Press begin republishing Fante’s out-of-print work. In his introduction to this re-print, Bukowski wrote “Fante was my god.”

As seminal figures in Angeleno and American cultural history, Fante and Bukowski are perpetuators of that semi-autobiographical tradition revolving around madness, alcohol, poverty, womanizing, Los Angeles, and despair, in no particular order. The release of Fante’s son’s memoir indicates that it may be an appropriate moment to ask where their legacy stands today.

In many ways, Dan Fante followed in his father’s footsteps. He inherited “the family disease” of alcoholism, worked blue collar jobs in New York City, and alludes to many colorful crash-and-burns involving women and brawls. Like his father’s “Arturo Bandini” or Bukowski’s “Henry Chinaski”, Dan Fante’s gory detective novels follow a “Bruno Dante.” 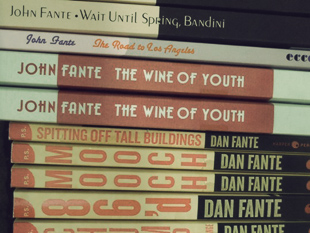 Dan Fante started his reading with a show-and-tell. Not revealing his direction at the outset, he harkened back to 1992, when he returned to his “Mama’s house” in Malibu, jobless and enrolled in a 12-step program. There, in the garage, Dan Fante uncovered his father’s typewriter—the one he used to write his last book, The Brotherhood of the Grape. With a half ream of typing paper at the ready, Dan Fante began his first novel, Chump Change. To a crowd of craning necks, Dan Fante uncovered the typewriter and reveled in the poetry of its history.

The reading remained a show-and-tell, eased along by Dan Fante’s candid nature and a penchant for pleasant tangents. When everyone had seen the typewriter, he read a poem written for his father, delivering lines such as “and I thought fuck the fucking L.A. Times / they’re fifty years too late / it can’t help him now…”

Moving on to the memoir, Dan Fante asked “Does everybody know Musso and Frank’s?” The audience murmured its recognition of Hollywood’s oldest restaurant, a literary hang-out that appears mostly the same today as it did in Tinseltown’s Golden Age. Dan Fante described the social scene his father was a part of there, along with the likes of Raymond Chandler, William Faulkner, F. Scott Fitzgerald, Dashiell Hammett, and Nathanael West. In one passage, Dan Fante related a tale involving William Faulkner’s wife, Estelle, naked and setting flame to a bourbon-soaked mattress as John Fante carried an inebriated Mr. Faulkner out the bungalow door.

Dan Fante returned often to the themes of anger and alcoholism, touching upon that oft-abused link between substance abuse and genius. He said “My problem isn’t with alcohol. My problem is with my mind.” His older brother, Nick, died of alcoholism at 55, and Fante raised a shirt sleeve to show us a memorial tattoo on his bicep.

While we may not yet have a definitive “next” Fante or Bukowski, Dan Fante demonstrates the lasting appeal of the squalor, misadventure, and electric fury put forth by such authors, even if it is an appeal we don’t fully understand, or are conflicted about. Both his personality and his writing coalesce into a sort of question mark that asks one to delve into the origins of cultural myths that form our notions of talent, fame, anger, and artistry in Los Angeles.

Dan Fante seems to have very few illusions about the audience’s weighty interest in his father, and showed no resentment. Instead, he openly referred to his years of alcoholism and expressed a gratefulness both to be alive and to have the opportunity to share his own perspective on his father.

Aside from his own vision, the younger Fante provides a refreshing and much-needed examination of the elder Fante’s life—and the cloud of dirty glamor that surrounds it.