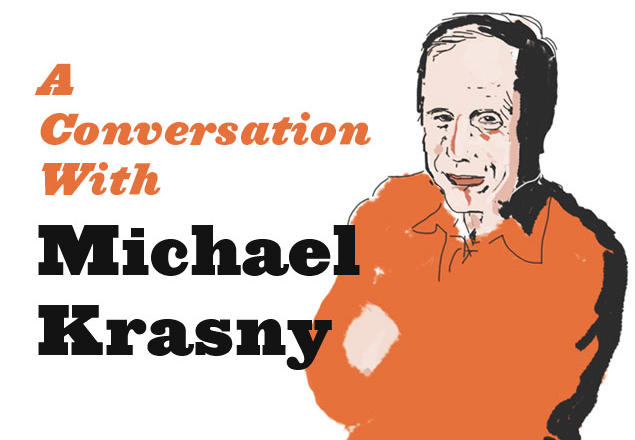 A Conversation With Michael Krasny

Michael Krasny, Ph.D., is a luminary of the Bay Area literary scene. Host of KQED’s morning talk show Forum, he has taught English at San Francisco State University since the seventies, and is the author of two memoirs. His latest, Spiritual Envy: An Agnostic’s Quest, was released last fall. It chronicles his life-long search for spiritual meaning, and his attempt to carve out a set of moral principles in the absence of a firm religious standpoint. It also uses examples from history, art and philosophy to give a thorough account of agnosticism as its own school of thought. I recently sat down with Dr. Krasny at the San Francisco offices of KQED.

What was the moment that prompted the writing of Spiritual Envy? It seemed to me to be a response to the amount of material coming from the new atheist movement, stuff like Christopher Hitchen’s God Is Not Great, or Dawkin’s The God Delusion, as well as films like The Atheist Tapes and Religulous. Is that the case, or had this been gestating for much longer?

Those certainly had a lot to do with it, but I wouldn’t say the idea directly came from that. I talk about Hitchens and Dawkins and Sam Harris in the book, and I had been able in the past to interview them, so that was definitely there. But this was something I’ve been struggling with most of my life. I remember reading Saul Bellow when I was a young man and being struck by the question he asks: “How should a good man live?” I had written a previous memoir called Off Mike: A Memoir of Talk Radio and Literary Life about how I had come into broadcasting. I had tried to be a novelist but I had failed at it. And I went into broadcasting and teaching, and I had moved into this life of a scholar, but I was still thinking about that question. I wanted to try and deal with it by looking at how it had played a role in my life. That was really the gestation, or the genesis, of this book.

Do you ever think of going back and trying to write a novel?

It’s something I dream about, but at this point in my life, realistically, I don’t think it will happen.

Considering the tone of the books I mentioned, as well as the tone from religious people on the other side, did you worry that Spiritual Envy might struggle to find an audience? Did you consider the market for it at all?

I didn’t. It’s funny, I had a friend, very entrepreneurial type, when I told him I was writing a book about agnosticism, he said “Are you crazy? People don’t want to read about questions, they want answers!” But you can’t worry about that when you’re writing. You write the book because you have to write the book.

Considering your basic skepticism regarding religion, when you interview someone who is using religion as a basis for their cause, do you give them the benefit of the doubt that they actually believe what they’re saying, or do you question their sincerity?

I think it’s a case-to-case basis. I think it’s very important to be respectful of people and their beliefs, even though there are times where you want to say, you know, ‘Hey, don’t push your religion at me, buddy.’ At times I’ll be reminded of the character of Elmer Gantry, the minister from Sinclair Lewis’s book. We’ve certainly had our share of that type in this country—Jimmy Swaggart and such—frauds or phonies when it comes to what they preach.

When it comes to President Obama, what do you make of the controversy that surrounds his religion? I’m thinking not only of the conspiracy theories on the right about him being a secret Muslim, but also of someone like Bill Maher, who said that he voted for him while being under the assumption that he’s not actually religious, but that he just has to pretend to be to get elected.

When it comes to that, my sympathies tend to lie with Maher. He’s (Obama) made a very small show of religion since he’s been in the White House. Other Presidents have always made a bigger deal about it, about making a show of attending church on Sundays and things like that. Bush obviously, but I remember Nixon and Carter did it as well. In that regard Obama really hasn’t shown much effort to follow in that tradition. You hear him invoke God a lot, as a blessing, like any politician has to. I certainly don’t think he’s a Muslim, and were I inclined to take a side on his religion I’d take his word on him being Christian.

Not to add to the problem of turning every conversation with someone in the media into a conversation about Fox News, but I was interested in getting your take on them for several reasons. You do a show that is hosted by NPR, who is constantly under attack from Fox for one reason or another, whether its the Juan Williams controversy or something else; as a long-term agnostic you’ve seen how quick Fox is to invoke Christianity—whether it’s the “War” on it, or just the larger “Culture Wars” relating to it; and as someone who grew up Jewish, your feelings on Glenn Beck, who’s sometimes referred to these days as a Father Coughlin type, and who’s always quick to make references to Nazism.

Well, I don’t know how much Judaism has to do with it. I don’t consider Glenn Beck a Father Coughlin type. Father Coughlin made his name as a virulent anti-Semite. I consider Beck more of a carnival barker, frustrated history teacher, shock jock. Though he obviously has a good amount of supporters. When it comes to the rest, what I tell people who support NPR—or people who don’t—is that National Public Radio now has more listeners nationwide than any of the cable news networks: Fox, CNN, MSNBC. I’ve watched Fox News rise using what I consider less than reputable journalistic standards. I don’t think they operate with the public interest in mind. I’m proud to work for NPR; I think’s it’s an important thing to have that branch of news that holds itself to the highest standard. We may not always succeed, the Juan Williams debacle was obviously very ugly. But we are mostly successful in that regard. 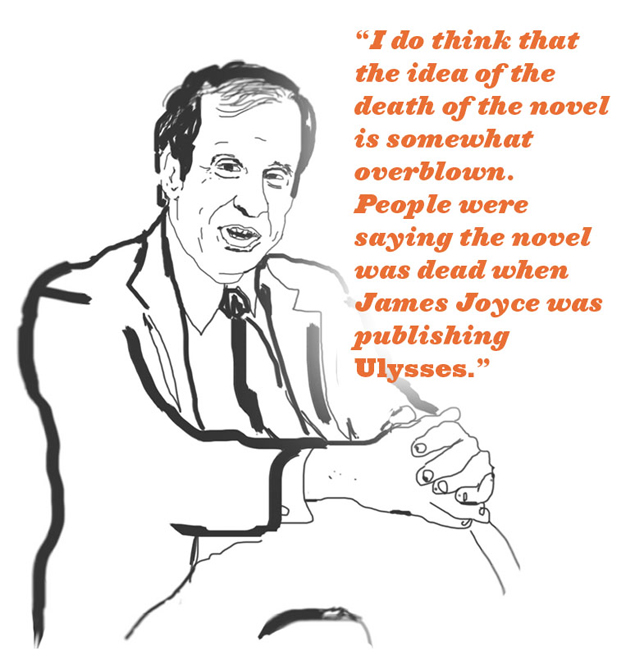 In Spiritual Envy, you talked about how much of an influence Saul Bellow had on your thinking. He’s been in the press recently, because of the publication of his letters. I also know your a big admirer of Philip Roth, who himself has been getting a lot of ink recently for the publication of his 578th novel. In articles such as ones in The New York Review of Books, and a recent interview with Roth, there was concern expressed that perhaps Bellow—as well as his peer, the writer Bernard Malamud— might be in danger of falling out of favor with modern readers. Is that something you see as possible?

Well, Malamud’s still very well-regarded for his writings not just on Judaism, but something like his novel The Natural, which was made into a very famous Robert Redford movie. I think the shelf-life of the movie will be very long. As for his writings, does it speak to readers today as much? I don’t know. His writing had what Roth called, in his eulogy of him, a “stern morality.” Those three were certainly writers of a specific time. They were Jewish intellectual writers who had a major impact on the culture around them. We don’t see that as much these days. Although, there’s a very good writer, Jhumpa Lahiri, she’s cited Malamud as the biggest influence to her writing. People in literary circles might be more likely to read Lahiri these days, but I think you can still see his influence. As for Bellow, there’s that whole group of writers who’ve written about the impact he’s had on them. I’m thinking about that group of writers from England—Martin Amis, Salman Rushdie, Ian McEwan. Will Roth still be read in years to come? Who can say? American Pastoral is certainly a major novel, as is The Human Stain. Recently he’s put out these smaller novels, which are very dark and not very hopeful. There may not be that big of an audience for those kinds of novels. I remember someone once said to me, “Why would I want to read Philip Roth? Why would I want to read about these old, bitter men who struggle with impotency and die?” For my part though, I’ve never come across anything by Roth that I haven’t considered worth reading.

Roth, in the same interview where they asked him about Malamud, made a statement he’s been making for years now, which is that the novel, as an important cultural touchstone, is basically dead. He says that as we continue along, that the novel will become basically a cult thing, but that readership will get lower and lower. What’s your take on that?

I think he may be right. In terms of the literary scene it isn’t the same as it was even thirty or forty years ago, when you had people waiting for the new short story from someone like William Styron to come out in Harper’s, or Playboy, the magazines that would publish them. You don’t have that so much now. But I do think that the idea of the death of the novel is somewhat overblown. People were saying the novel was dead when James Joyce was publishing Ulysses. People would claim the death of painting when photography came about. So I don’t think that novel is necessarily finished, no.

What do you think of the state of the modern reader, at least as you’ve come across them in your classes? Have things like Twitter and text messaging had an effect on how they approach literature?

I think it’s had a noticeable effect. Something like Bellow’s great novel The Adventures of Augie March, which I consider the greatest thing since Adventures of Huckleberry Finn, I don’t think a lot of readers have the patience for anymore. It’s great, but it’s a behemoth, and there’s a lot of things competing for their attention—posting on Facebook or Twitter. That’s why, in my classes, I’ve focused more on the short story. I also put out, on DVD, the Masterpieces of Short Fiction collection, for classes to teach. It’s my hope that if a student reads something like Bellow’s “A Silver Dish,” they might be moved to go on to read Herzog, or Augie March.

What do you think of the state of current writers? Is there anyone you really enjoy, anyone that could possibly stand the test of time the same way Bellow has, or even someone like Faulkner?

Finally, you obviously have to keep abreast of the material that gets larger coverage, but do you get a chance to read much small press and/or local stuff?

I don’t so much anymore. It’s harder these days. It’s hard to decide sometimes, who to bring on to Forum. You’ll have important figures of the moment on one hand, and on the other you’ll want to give the spot light to someone you think needs it more and who deserves it. How do you choose? As far as small press, I’m a fan of what I do see. I like the Threepenny Review. I like Zyzzyva, despite the presence of Howard Junker, who I do not care for and am glad is leaving to let Oscar Villalon, from The Chronicle, take over. At least I hope that’s still the case. Then there’s all the poetry publications. Poetry’s become a small press in and of itself. And there’s everything online, which I didn’t even get to. Like with what you’re doing.