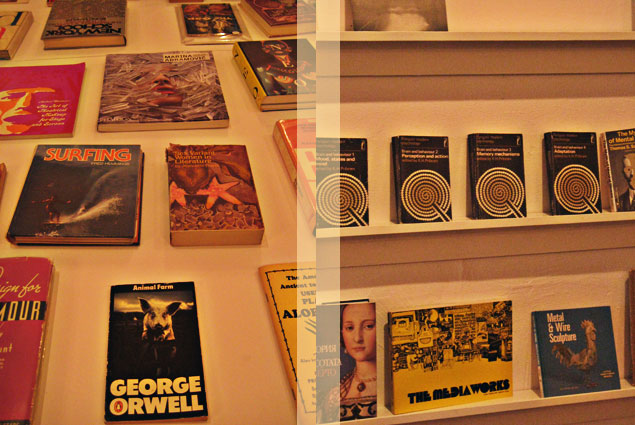 The Scanners Project is a novel (sorry) concept—the bookstore as an art form. Set up with striking displays that emphasize the visual, tactile pleasures of the physicality of books, the store is an attempt to showcase the need for the real object in this age of digitalization and dematerialization, as well as the unique atmosphere of being in an independently run operation, free from the constraints of corporate influence and trends. The project—which will only be around until the end of October—is the brain child of writer and bookseller Nick Hoff and visual artist Matt Borruso. We talked to Hoff about some of the ideas they’re exploring with the store, the future of physical books, and the freedom of running a temporary business. 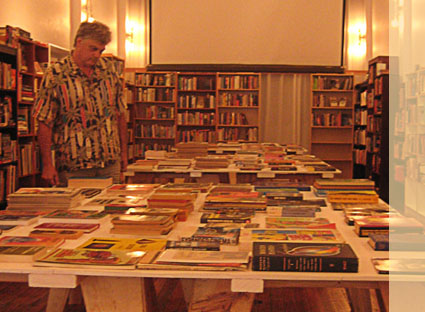 Tell us a little about the project.

It’s a one month temporary bookstore with the focus on ‘the book as physical object.’ Matt uses a lot of print material in his artwork, so for him, the objective quality of the book is very important. And I’m really interested in this increasing dematerialization of culture, through the computer and the internet. We’re seeming to read more and more stuff online, and I’m really interested in how that changes the reading experience. When you read something online or on a screen or on an E-book, how is it different from reading a physical paper book?

We’ve sold collectively at the flea market for over ten years. This is sort of an extension of that work. What happens there and here a lot is that people come in and they have certain titles in their minds, but usually what they end up with is something they didn’t even know they were looking for, because of the display or because of the juxtaposition. And this kind of discovery can only happen, we think, in a physical store. A different kind of discovery happens on the internet. But its a very directed search, so you kind of just find what you’re looking for, and maybe the computer has an algorithm that says, ‘Well, maybe you should try these.’ But there are many things here that we’ve put in a certain order, a certain display, that will expose you to something you might not have thought interesting before. And that’s an important thing we might lose if the bookstore goes.

Do you find that there’s a difference in the way used bookstores emphasize the visual display of their books compared to the big chains?

There’s a huge difference between a used bookstore and a new bookstore. I think that those chains put a different emphasis on their displays. They’re usually just displaying what’s popular, or what a publisher is paying them to display. And a used bookstore doesn’t have any of that. Sure, they might go with the popular, but I think most of the bookstores, at least in San Francisco—the used ones—try to display what they find interesting. And that’s kind of what this is. Everything in here is something that one of us—Matt or I—finds interesting. We didn’t want to try to cater to all tastes. It’s not a very good business model. It’s just stuff that we’re interested in. I think a lot of bookstores do try to do that, but they have to stay in business, so they have to do things differently. Because we’re not trying to do that, we have a little more freedom. 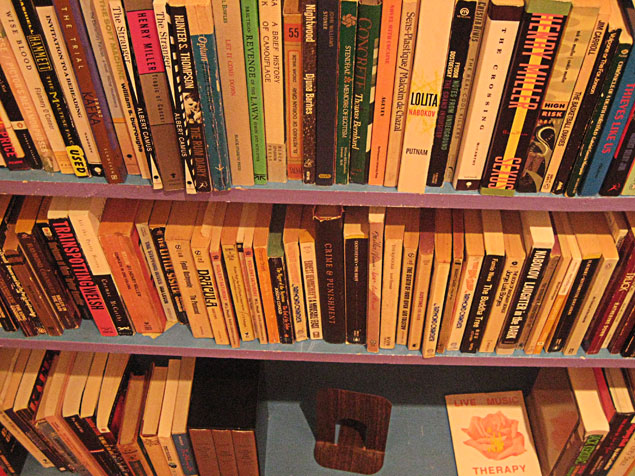 After the end of the month do you have plans to take this somewhere else or move on to a new project?

Move on to the next project.

So this is temporary in the most basic sense then?

Completely temporary. It’s not a roving bookstore at all.

Do you still sell at the flea markets?

Well, I haven’t for a couple of months because I’ve been working on this, but I’m gonna have to, if just to get rid of a lot of this stuff. This is maybe a third of our whole stock.

In terms of flea market culture—and my dad used to sell at them, so I know the culture—have you seen it take a hit and decline since sites like E-Bay have come about, or has it been pretty stable?

What’s been the reaction to this project amongst booksellers and other artists?

It’s been really positive. A lot of people have been really excited about it, they’ve really loved the display and the categorization. We had an event last Wednesday with two booksellers, William Stout—head of Architectural Books, one of the best bookstores in the country—and Paul Yamazaki, the head buyer at City Lights. They had a conversation about bookselling and they we’re pretty excited about this store as well. To get book people like that excited is something I’m proud of.

Have you seen a decline in the graphic design aspect of newer books since so many of them are now sold online or read on a tablet? Is there less of an emphasis put on that end now since selling them is no longer a matter of catching someone’s eye?

I don’t know if I could really say. There’s certainly beautiful books being published now, but there’s also a lot of pressure on publishers, economic pressures, which don’t have anything to do with the internet or the E-book. Many publishers used to be independently owned, so they expected a certain return on their investment, and now that most publishers are owned by some corporate overlord who demands twice as much of a return, they have to slash their budget on all sorts of things. From that pressure there has been a decrease, with certain publishers I’ve noticed, in their cover designs for example.

It’s an interesting question, in regards to the E-reader. You know you can change the size of the font in the E-reader, so basically whatever an interior book designer does, it’s gonna have no meaning, since you can just completely change everything. So I think there’s some interesting questions that have to be answered, in terms of design for that aspect.

But I guess I’m not as pessimistic as I used to be about the death of the physical book. I think it’ll survive. Certain things – like there might be less and less romances published physically. Those might all be E-reader books. But a book of poetry will always be physical, an art book is always going to be physical. 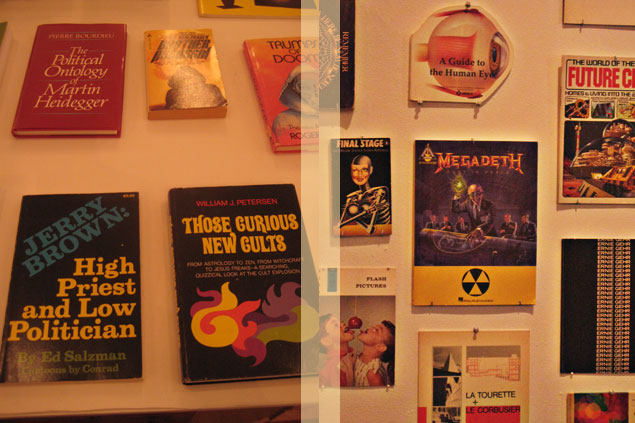 You don’t see it as going the route of vinyl, becoming a specialized thing?

I think it could in certain areas of publishing. Maybe poetry and art books, for example. If it goes that way though, I think the market will be really small, just like vinyl. But I think it’ll be bigger than that. I think there will always be a bigger demand, even just for a regular novel, in print form. So it’ll probably be between the way it is now and the way vinyl is now.

I think Harold Bloom pointed out that, if you think about it in one way, they’re kind of a step back in technology: with an e-reader you have to plug it in, make sure the battery is charged, turn it on; if it gets wet or dropped it’s finished. With a regular book all you need to do is pick it up and open it.

Yeah, all you need is light. I totally agree with that. There was a cover for The New Yorker a few years ago, it was a cartoon that showed Manhattan in smoldering ruins. There was an alien sitting on top of this ruined building, and there’s a whole heap of ruined kindle-type devices and the alien is reading a regular old book. That gets to one of the things that I wanted to discuss in the events—which is the “digital dark ages.” Have you heard of that idea? It’s the idea that digital technology has a very short life span. You can really only hope to archive them for five-to-ten years. So if you start digitizing things and then stop worrying about the originals, or making just things originally in digital form, they’re not going to stick around. But the book—paper—has proven remarkably resilient.

SCANNERS is located at 312 Valencia, San Francisco CA. Go to www.scannersproject.com for more information and for events listings.