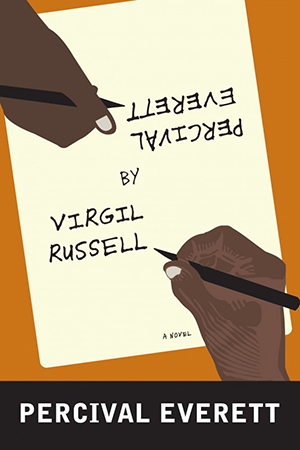 Percival Everett is no novice at experimentation. He’s employed all manner of post-modernist devices (two terms he’d probably take issue with, if not outright dismiss) in his previous novels: a novel-within-a-novel, three novellas that tell one complete story, and a plethora of modern epistolary.

Everett is one of the most important, and still overlooked, novelists in the contemporary American landscape, and though he can be a devilish trickster when it comes to the way he lets his stories unfurl, he is the farthest thing from pretentious. These devices, tricks if you will, always add a very important layer to his stories, while helping to bring them to their (often devastating) necessary conclusions.

It is too bad that the same cannot be said of his latest, and almost certainly most experimental novel, Percival Everett by Virgil Russell: A Novel

, where the titular author/subject finally loses the thread. Right from the beginning one can tell that this will not be a straightforward novel, as a nameless father and son argue about the nature of the story that is to unfold. It seems as though it is a tale being told by the elderly father to his possibly deceased son, the type of story his son would have written if he had been a writer.

That premise is almost immediately reversed when the son then claims it is he writing the story, for his father; the type of story his father would have written if he had been a writer. As the book unfolds, we find ourselves following the narratives of a rancher who is introduced as a handyman, only to later have his profession changed to a city-dwelling doctor, as he treats an obese drug dealer for numerous health problems in exchange for vintage photography equipment, as well as a semi-famous painter who discovers he may have an illegitimate daughter.

The characters in these not-quite-vignettes constantly have their names, locations and histories changed, sometimes in the middle of a sentence. Between these two narratives are short musings on philosophy, mathematics and the (non)existence of God. Historical figures such as Nat Turner and William Styron make appearances, references to Dante’s Inferno are littered throughout, and photographs of desert landscapes are printed sporadically.

There is a middle section that takes place in an elder-care facility, where the residents decide to take revenge on their abusive overseers. This provides, by far, the most complete part of the novel, including a moving conclusion, one which leads to a larger conclusion which helps tie the rest of the book into a kind of semi-coherence.

None of this is quite as overwhelming as it may sound: from the outset we understand that Everett is exploring the nature of not just storytelling, but language as a whole, how it works as a mechanism to deal with the unexplainable and disappointing nature of life. It’s a lofty goal indeed—one that comes with a few moments of true clarity, but in the end remains mostly obscure. The novel is an interesting experiment, but not one that is likely to linger in the way Everett’s best books do.

Although the man can turn a hell of a phrase when he so chooses (“Come forth Lazarus! And he came fifth and lost his job.”), Everett is not a stylist in the tradition of other great experimentalists, such as Joyce, Beckett or Woolf. You follow them wherever they take you, even when you don’t understand it, because there is a bold and beautiful quality to their prose that sustains you as a reader. Everett is much more plain spoken, which usually fits the type of stories he wants to tell, but which holds him back in this case.

Everett should be respected for putting out this book at this point in his career. He seems to constantly be on verge of having a full-fledged breakthrough, and coming out with so esoteric a work directly after what may be his most accessible book (2012’s literary detective “novel” Assumption) shows that he is following his muse wherever it takes him. For fans, Percival Everett By Virgil Russell is an interesting and no-doubt important part of his oeuvre, but not one likely to stay with them once they’ve finished it.