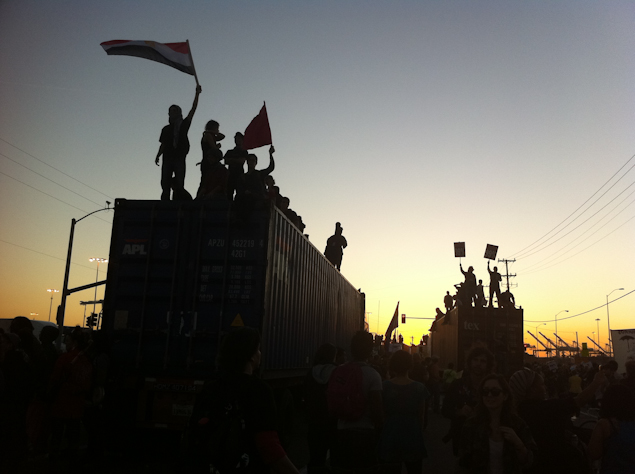 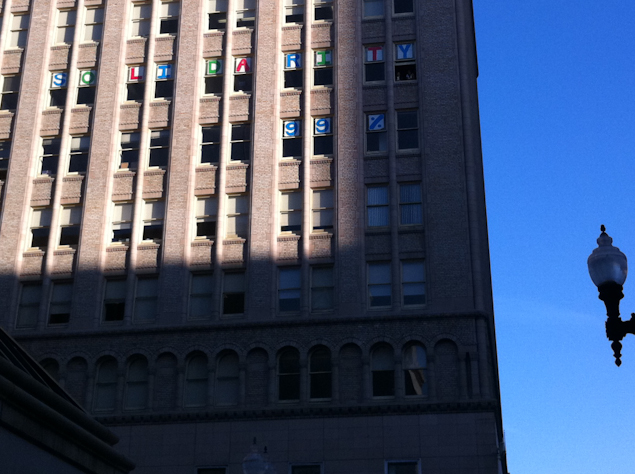 Earlier, there had been spraypaint and shattered glass by Lake Merrit, and later there would be bonfires and batons again  in Downtown Oakland. But I didn’t see any of that. What I saw last Wednesday was people gathered together, a bit raucous, pissed off but happy to be in each others presence, encouraged by a show of resistance. 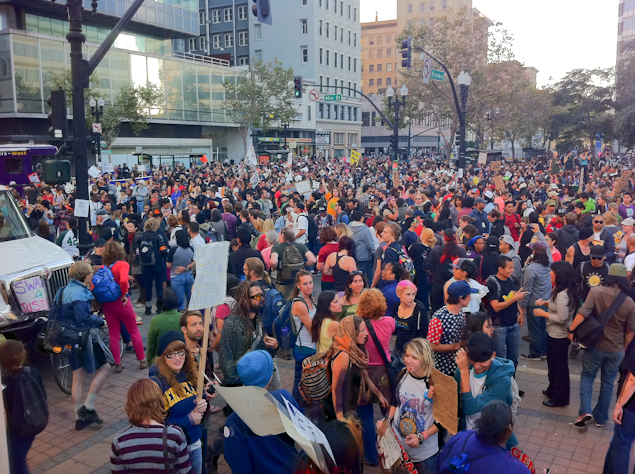 What I saw at Frank Ogawa Plaza on the day of the general strike, and on the march as Aurora and I walked from there to the Port of Oakland, was a chaotic yet cohesive group of people. Though they came from all ethnicities and walks of life, with a hundred different messages, there was a common strain through all the signs and t-shirts and slogans—one that I saw summarized in the sign held by a young woman: “People Before the Dollar.” 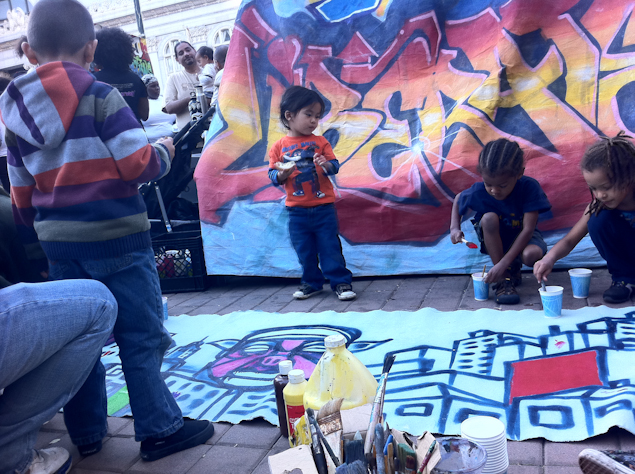 The march in Oakland was the largest street protest I’ve seen in the Bay Area since the rallies against the Iraq War. One of the defining factors of the Occupy movement is that it takes place in physical space—though the virtual and media representations of it are endlessly multiplying (this blog is an example) the thing itself is something you have to physically be present to take part in. 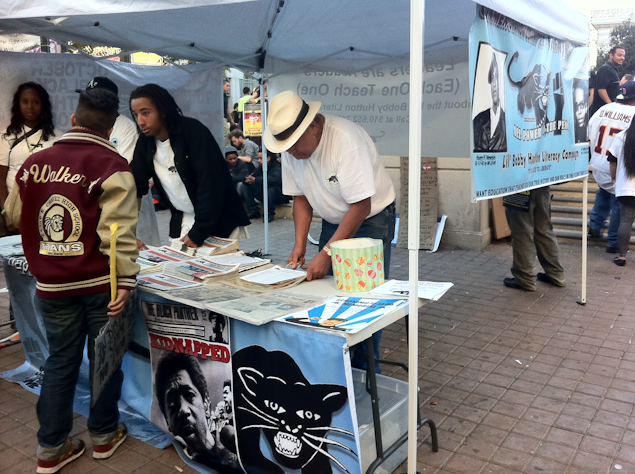 The diversity and divergence as well as the strength of this movement are made visible by this act of physically inhabiting a public space together. In the Plaza, the tents included everything from a childcare tent to a Black Panther heritage group, everything from children painting to adults holding committee meetings. 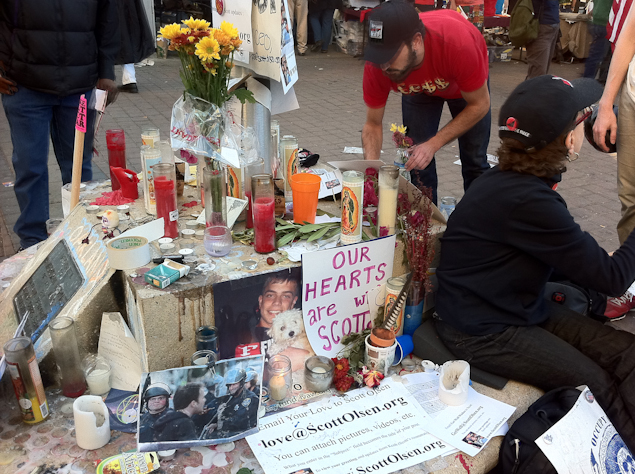 In the Plaza, a public memorial to wounded Iraq War veteran Scott Olsen is prominently on display. Olsen remains hospitalized after a tear gas canister struck him in the head during a confrontation between police and protestors at 14th and Broadway. 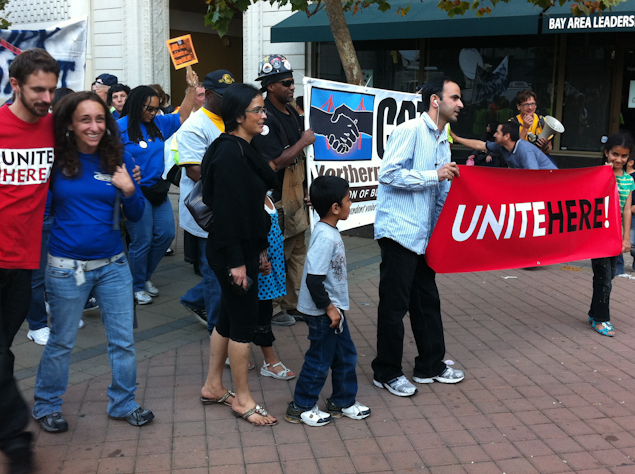 At right around 5:00 pm on November 2nd, the march to the port started. Drums sounded, and an enormous crowd gathered right outside Frank Ogawa (aka Oscar Grant) Plaza, in the intersection between the Plaza and Oakland City Center. Groups lined up to begin the march, including the Black Trade Unionists, the SEIU, Unite Here, and other groups. Though the crowd wasn’t under any kind of closely managed, central direction, there were leaders speaking on megaphones, rallying everybody to head to the Port of Oakland. 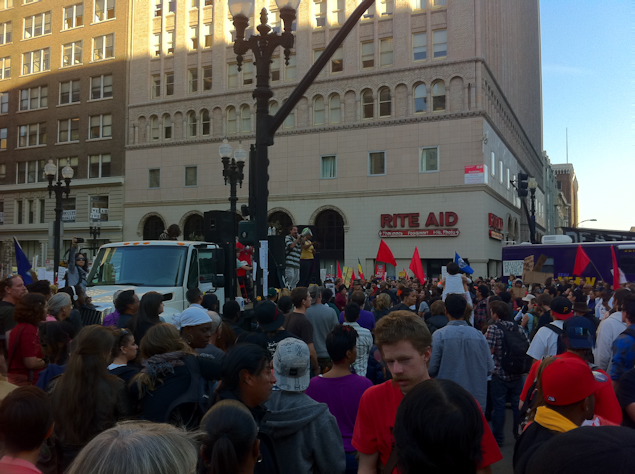 We then began the long walk to the Port, heading down 14th Street. As we passed Clay, people honked their horns in support. Some people wore Dia de los Muertos paint. There were punks on skateboards, veteran hippies who might have been part of the movements for social change back in the 60’s and 70’s, young families pushing strollers. It was a massive group of people, and when I looked forward down 14th street as far as I could see it was packed solid. 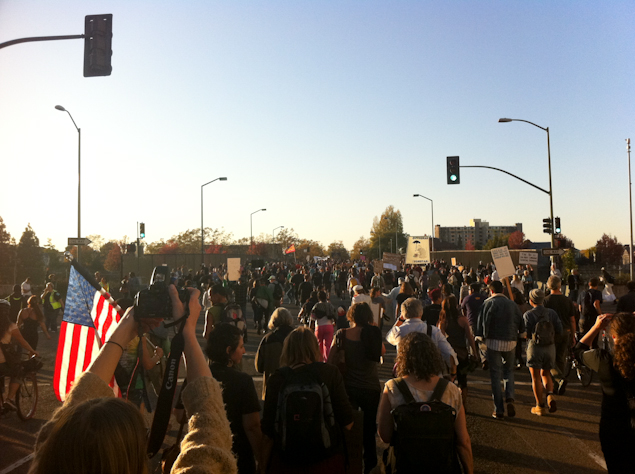 I started documenting some of the signs I saw: two older women standing on a sidewalk with a sign saying “Grandmas Support Occupy”; a sign with an American flag that said “We Are Not for Sale, We Are the 99%”; another reading “Occupy Oakland Not Palestine, Jewish Voice for Peace Supports the Movements for Justice.” A guy with long hair and a fedora and sunglasses held a sign with a Ronald Reagan quote: “Concentrated power has always been the enemy of liberty.” 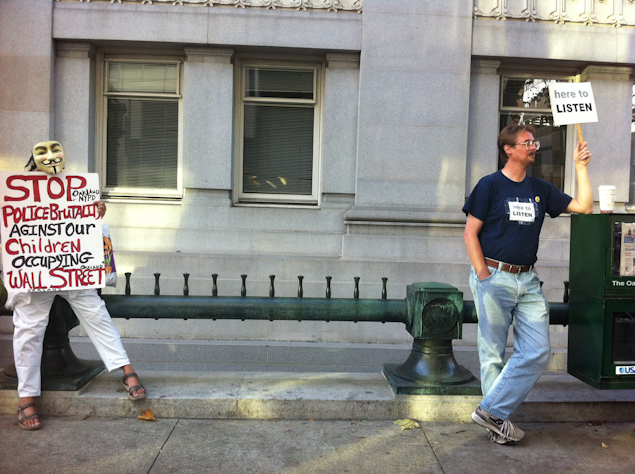 As we passed 14th and Brush, we stopped, and a couple of Occupy organizers in safety vests were periodically stopping foot traffic for cars to pass through. Police presence was minimal. As we passed into West Oakland, the march turned on 14th and Market and hung a left turn as bike cops sat idling in the intersection by an unmarked cop car. On the grass in front of an apartment complex on Market St., some of the protesters paused for evening prayers, kneeling down and bowing towards Mecca. 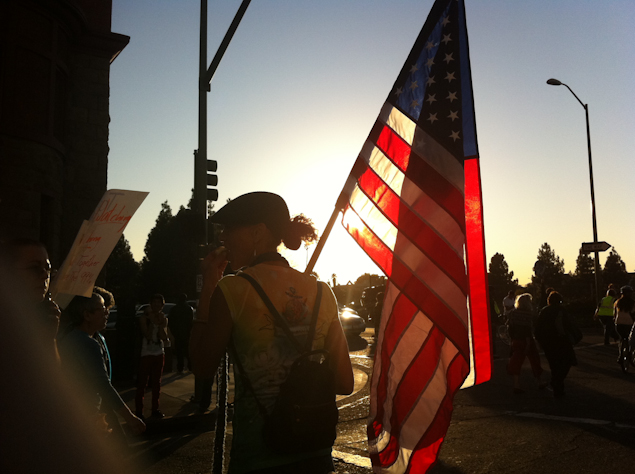 All along the march, the neighborhoods seemed to support it. There were honks and waves from passing or parked cars, people standing out in front of their house with signs,  people on the sidewalk or on their front porch all along Market St. When we passed under the freeways at 5th and Market, the police presence increased. 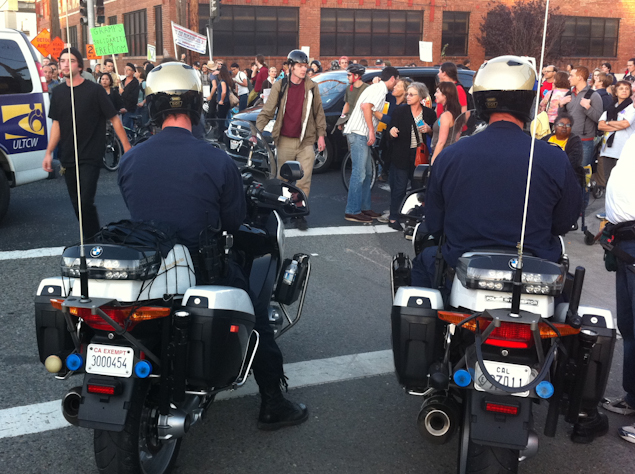 Some commotion briefly broke out—I didn’t see what happened, but apparently one of the protesters had jumped onto the front rack of a Hummer. I heard the crowd ahead cheer when the issue was resolved (though I’m ignorant as to the result) and the crowd kept moving, to the sounds of a tricycle sound-system and a megaphoned voice that urged us to keep moving. 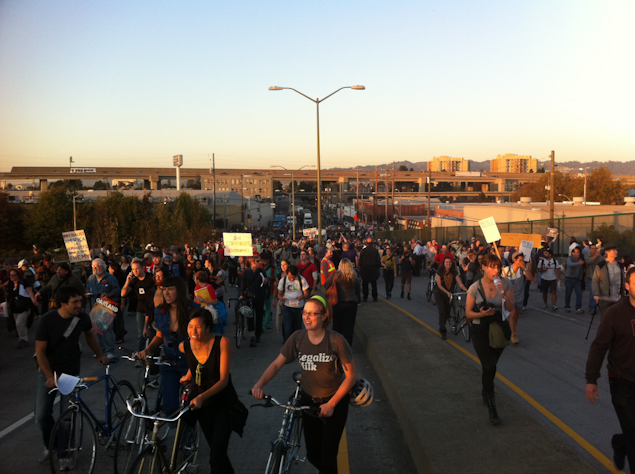 We arrived at the turnoff to the Port at 6 o’clock, and found a mass of people headed onto the overpass over the railyards, and the sun  setting over the cranes of the Port of Oakland. 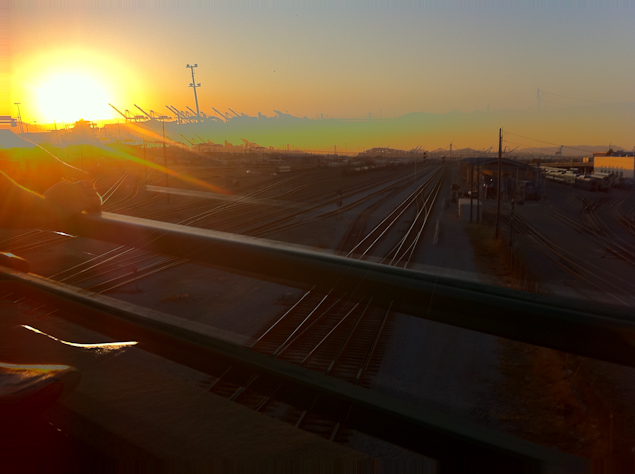 The entrance to the Port of Oakland was blocked to all traffic. A critical mass of human bodies made it impossible for any truck to pass, and semi’s sat idle as protesters scaled their sides and used them as platforms. Amid the American flags and display of patriotism, there was an echo of Cairo—a young man waving the red, black, and white of the Egyptian flag from where he stood on top of a freight container. As an Occupy SF participant from Egypt told The Creosote Journal, young people across the Middle East are inspired by seeing the movement for democracy that erupted in their countries, marked by massive street demonstrations, spread to the West. 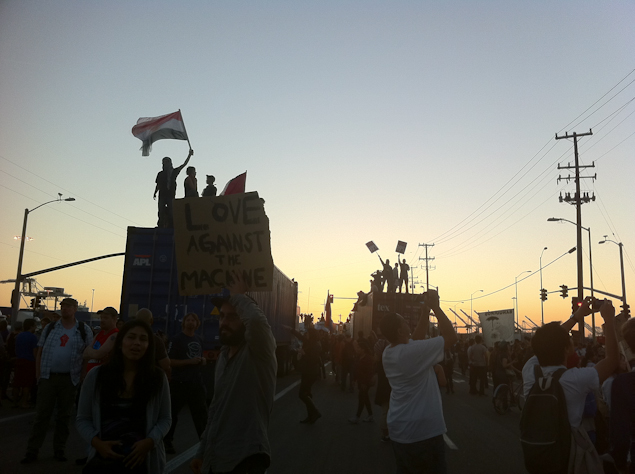 As with the rest of the march, and the Plaza, the protesters were peaceful in their approach, relying on numbers and critical mass, not violence, to get their point across. I’m always skeptical of groups, and though I walked with the Occupy Oakland protesters and therefore am one of them, I can’t speak for anyone else and I don’t think most of the people who were there would presume to either. Each person took actions that reflected their own choices. 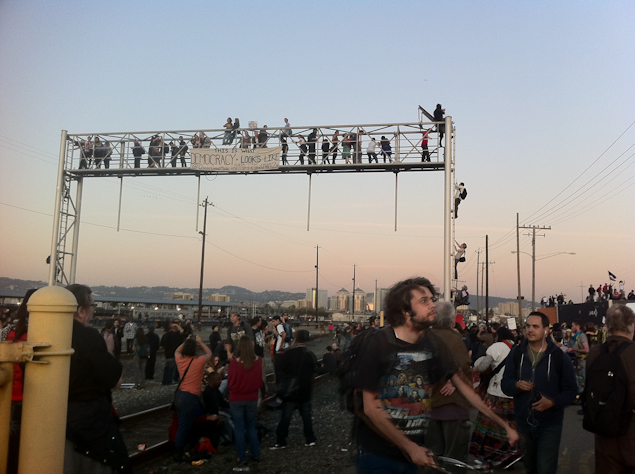 There’s plenty of room for disagreement about tactics and approaches, as there is about what the Occupy movement should emphasize. In the days after the march, I watched as isolated incidents of property damage and police confrontation became what the media focused on, when what I saw and remembered was not fist-pumping radicals but a broad group of everyday people out to show their support for the Occupy Wall Street movement and, yes, to create a disruption—one that would force a conversation to be had about economics, class, and social justice. 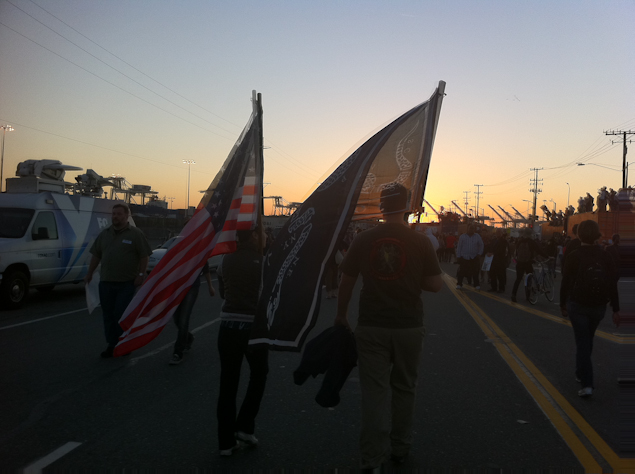 The Occupy Oakland demonstrations aren’t a political party or a plan of action. It’s a happening, and it’s more like a dialogue than a manifesto. Whatever becomes of it, what I’ll remember from the day of the march is this: the machines of commerce grinding to a temporary halt. The young people inspired and empowered because yes, there is strength in numbers. And the fact that despite so many good reasons for being angry and enraged at a system that is so broken, it was, overwhelmingly, not an angry event—it was about unity, solidarity, and a cry for accountability from those in power.