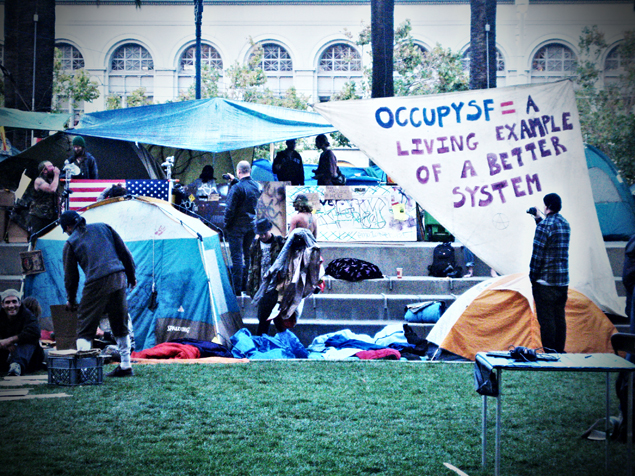 Though the Occupy movement is now at the forefront of the current American social and political climate, and coverage of it has overwhelmed the media, there is still much confusion over what exactly it’s all about. Questions abound over what the demands, goals and ethos of the movement are, while among those directly involved there is a general understanding that there is no one unifying philosophy or motivation behind it. With this understanding, we decided to talk to the people currently occupying downtown San Francisco’s Justin Herman Plaza, in order to get a sampling of what is moving the individuals to partake in this massive movement.

Here are a few of them, in their own words. 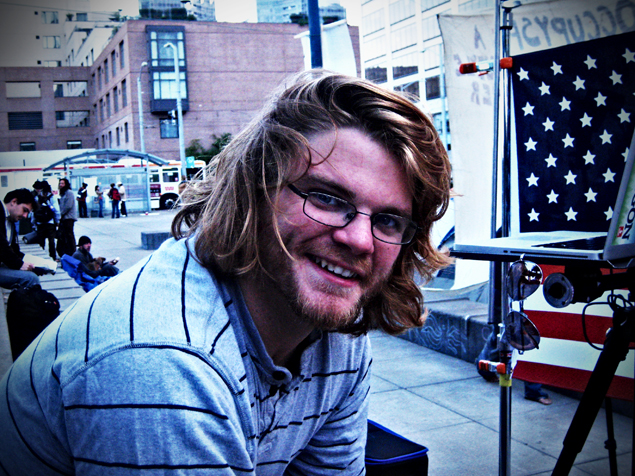 What I’m doing here is trying to take 99 pictures of 99-percenters. I’m using a 10×10 grid, and right in the middle where the 00th photograph should be, there’s going to a white background, just typeface, that says “1%.”

I’m not staying here at night. I’m not so much opposed to going to jail, but I don’t want my camera equipment to go to jail with me. That stuff belongs to the academy. I don’t trust the police to give it back.

In my mind—and I could be wrong—we’re Americans, we’re patriots. We care about our country. We don’t wasn’t this thing to go in the shitter; we care too much. And that’s what makes everybody here, every last person, a patriot. They’re being active, they’re doing the best they can to save their country. I think that’s something to be admired and respected, and needs to be documented. 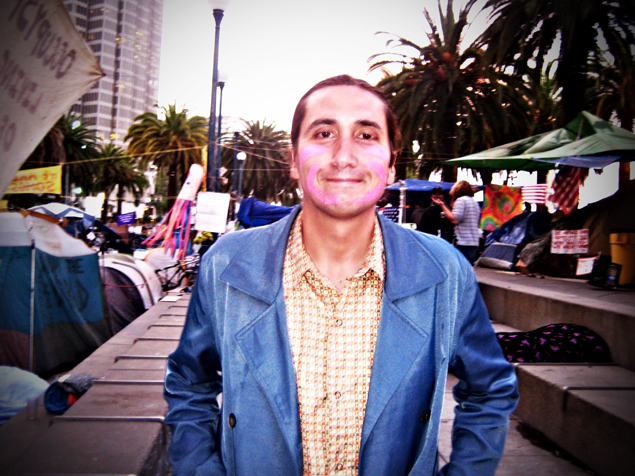 Myself and my friend who I’m here with, we’re Native Americans. We make our own signs, we also help do storage for people, make sure their stuff is secure. I’ve always taken part in protests in this city, since 2008, whether it’s Palestinian rights protests, or the Pelican Bay thing, World Can’t Wait…

I think right now, we really need to focus on economic policy, because we have so many people out here with so many different goals and beliefs and opinions and visions. Our goals are so lofty, and our agenda, for lack of a better word, is so varied, that you have to take it stages. I’m afraid that if we go too far and try to spread out to everything, it kind of waters it down, takes away the focus from the original core idea of what we’re trying to go after which started in New York with Occupy Wall Street.

It wasn’t Occupy Wall Street to end police brutality. There are all these other great goals, that will hopefully come along if the revolution does happen, which I hope it will… but right now we should focus more on the economic aspects. 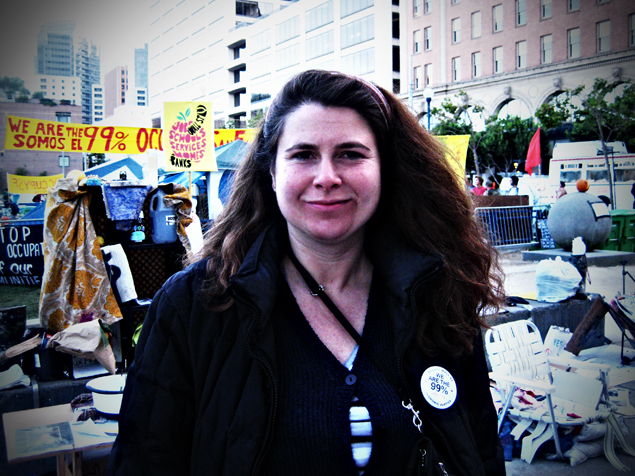 I was at the Federal Reserve bank for at least two weeks, and then I went back to the East Coast for a few weeks to spend a few days at Occupy Wall Street. I just got back yesterday. There’s a little bit of a different vibe in Zuccoti Square. New York is a little bit more business oriented and focused; San Francisco has more of a hippie vibe, a sixties vibe.

I feel like now we’re in the awareness stage. The people who first came out to these occupations are more aware than the general population of the problems and inequities of the system. They’re kind of the pioneers who are out here to say “hey, look what’s going on. Wake up, open your eyes.”

I think it would be premature right now to put out a set of demands, when you have people of all different political persuasions here, and at every Occupy. You have anarchists, you have libertarians, you have green progressives. But we’re all after the same goal: a system that’s fair and just and treats the earth with respect. 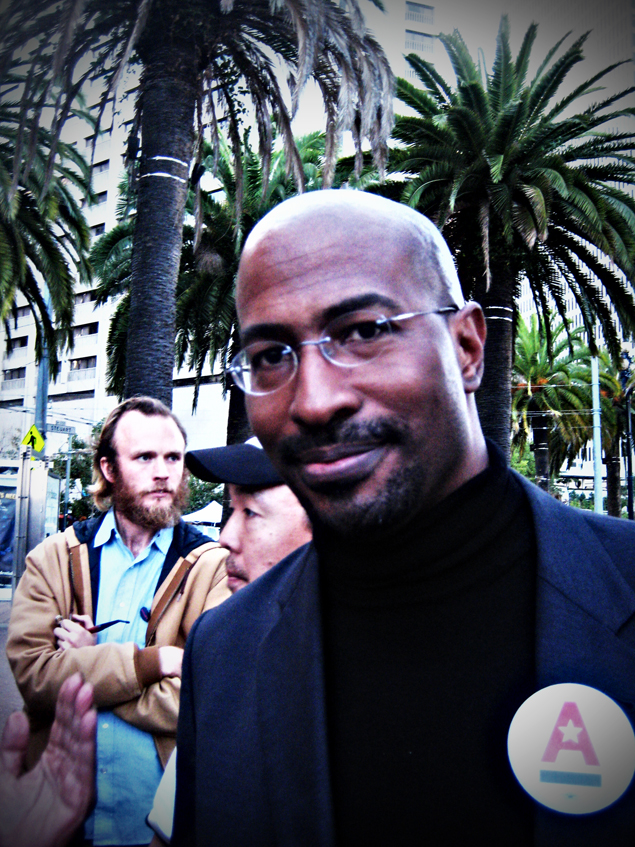 The drum circle here is much better than the one in L.A., I’ll tell you that.

I just wanted see history. If I could have been around in 1960, February 1st, when the people started sitting in to end oppression against black folks, I’d have been there. This is a sit-in, an occupation, an encampment, not just to end to the oppression of one group of people, but to end the whole obliteration of the middle class and working class of this country. I just want to be here to see some history. 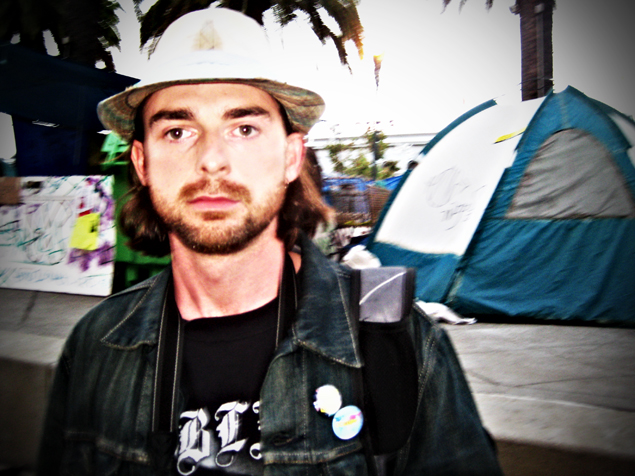 I am a Republican. I am voting for Ron Paul for President of the United States of America. I have not brought that up in my three weeks of being here more than a handful of times. For somebody to come here and represent themselves politically… they already have political aims, they’re not coming here and shedding that skin.

There is a spoonful of people out there that still support President Obama. What I would say to those people is: if you are old enough to remember the Bush administration, and what we went through in that era, this is no different.

Everybody here is completely against the war. 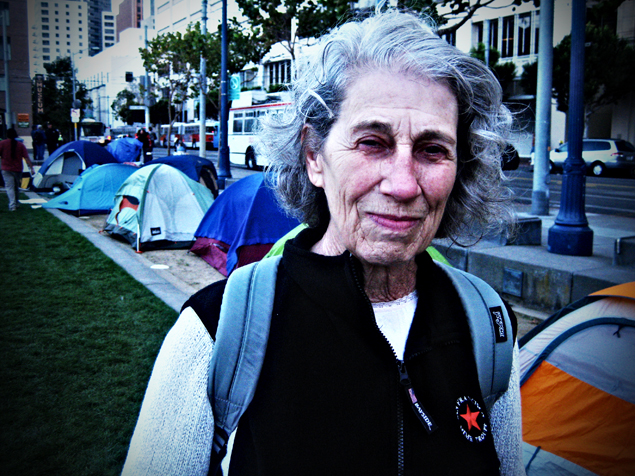 My affinity group decided to come down for just tonight and tomorrow morning in solidarity with everybody that’s sort-of permanently camped here. We’re from Marin County and San Rafael. As activists, we follow what the resistance is on every front, and we agree with the principles that first came out of Occupy Wall Street. We like the general assembly idea, that’s how we would like the world to function. Obviously, we’re objecting to financial mess we’re in.

We’ve been against the war, and against wars in Central America…I’d say from the eighties on. We came together as an affinity group during the Iraq War. The day the war started, there were thousands arrested in San Francisco, and our affinity group was among those arrested.

It’s important to resist the people that have their thumbs on everybody else. Even though each individual resistance doesn’t necessarily succeed, people need to resist those in power who are willing to subdue everybody else. Throughout history, a little bit of resistance might be the only thing that’s kept them from overwhelming us. 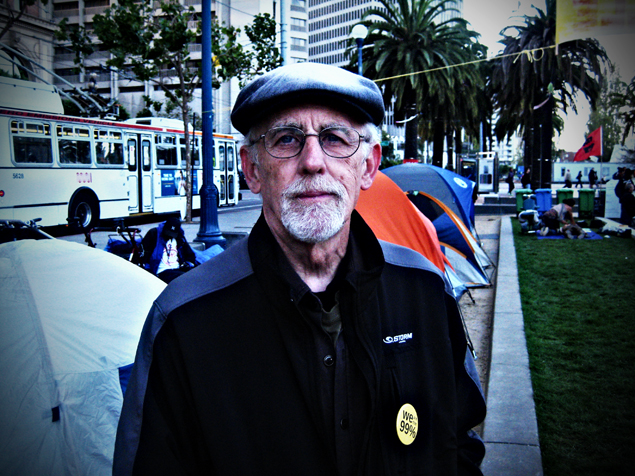 I’m not any more impacted by the economic circumstances than anybody else, in some cases I’m less impacted than other people who are living closer to the margins. I’m just angry that we live in a country in which a very few people call the shots for everybody, including how they can live. They are able to take away peoples resources and add to their own. I think it’s appalling, appalling beyond description. I’m angry about it, I’m sad about it, I feel rage and grief about what’s happening to people in this country.

I hope this is the beginning of the end of capitalism. I think capitalism is a brutal, carnivorous system that eats peoples lives, steals their resources. Noam Chomsky calls it the “on-going holocaust of capitalism.” We don’t see it in this country nearly as much as it impacts the rest of the world. There are people who are literally ground up and spit out by the capitalist apparatus. I don’t know what shape this movement will ultimately take, but my hope is that people begin to see that capitalism is the problem. It’s not individual rich people, it’s not individual politicians, it’s the system itself. 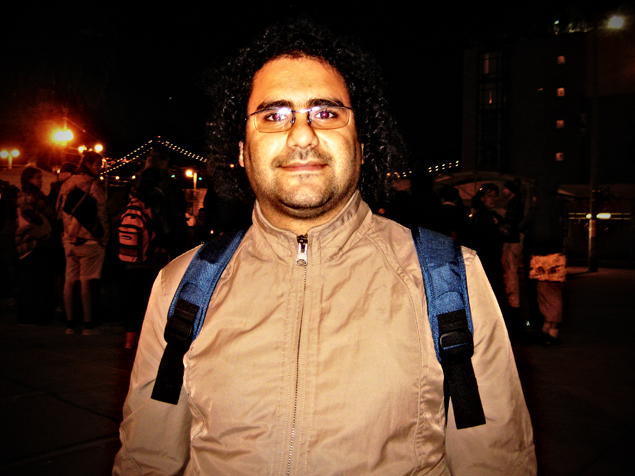 This is my first day in San Francisco, so I’ve only been observing firsthand for a couple of hours. But obviously, we in Egypt have been following the news of the Occupy movement, and also what’s going on in Europe. There’s a lot of interest in it, and we felt that at some stage there was more attention in Egyptian and Arab media of it than there was in the American media.

I feel the situation here is more dire than it was for the Egyptian revolution. There’s a lot of pride in the fact that the Arab movement has sparked a world-wide movement. It’s a very important thing, I think, because most of what we hear of the Western world is very formal politics of leaders, big men, and politicians and so on. If we hear about it at all—if it’s not about the armies marching into our countries. So it’s an opportunity to hear about the fact that a lot of the issues we’re dealing with have parallels, even in democracies. It’s an opportunity to hear more about peoples, and see that our struggle is universal.

But it’s also, I hope, a chance to realize that regular representative democracy is not going to match up to our aspirations. So if we look at the fact that people from the U.K., from Spain, from the U.S. are now occupying squares, and our frustrated at their own politics, then that should tell us that just having an elected parliament and a new constitution is not going to be enough. We should look at how to make the current revolutions into something more sustainable.

It does feel that your situation here is more difficult—because in Egypt, or in Tunisia, or in the rest of the Arab world, there is an acknowledgment that the regime is completely corrupt, and that something new needs to be built, and there’s an acknowledgment that it’s possible, event though in Egypt it’s a scary situation at the moment. Whereas here it feels that you have a very tough job convincing the rest of the 99% that they need to mobilize.