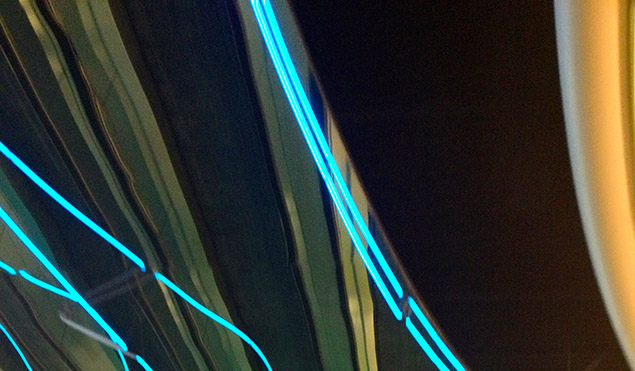 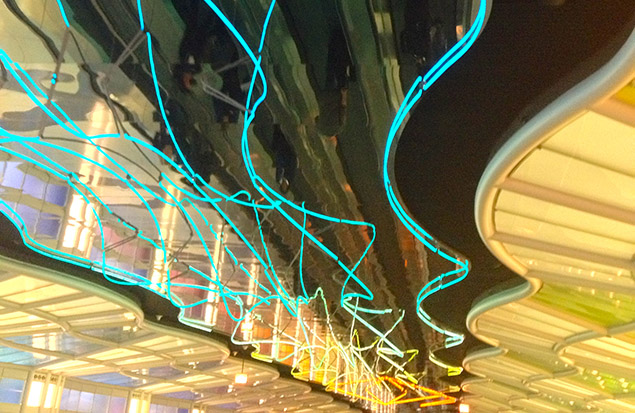 James Turrell is currently occupying large quantities of time and space at LACMA. His Los Angeles show will be up through March of next year. Visitors are encouraged to purchase the $25 ticket in advance, and enter the show in allotted time-slots. To be overly simple, Turrell’s work addresses purity in the form of light.

Sometimes the disruption is meant as an end in itself, as with Turrell, but other times it’s used to enhance, or mask over, something else. I recently had the pleasure of experiencing the latter, a very different type of light and sound art – Chicago O’Hare airport’s underground passageway, which I always simply think of as “the moving walkway.”

My folks are from the Midwest, so I got to ride the walkway with some frequency in my formative years. Heads cranked towards the dancing lights, my brother and I raucously chanted, “The moving walkway is now ending. Please step off.” Complete with moving neon lights, electronic music, and glowing wall panels, this tunnel of mild psychedelia connects Concourses B and C in United’s Terminal 1, called the Terminal of Tomorrow at the time of construction. It’s 2013. I’m formed now, I have an iPhone.

So this time the tunnel passage on the way to Grandma’s not only gave me brief, pleasurable moments of awe and nostalgia, but spurred research into the origins of the moving walkway, accompanied by one Instagram and two Vines. Blueprint Chicago writes of the tunnel, “It looks and sounds like a time machine…When people emerge from the escalators into the United terminal they might expect to find themselves in the year 2050. More likely they are running late for a plane that’s about to take off promptly in the year 2010.”

Unlike Turrell’s solo visions, the tunnel is not the vision of one artist but a collaboration between three, although California’s noted contributions to light and sound art come through true as ever. The light sculpture dancing  on the ceiling is called “Sky’s the Limit”, designed by “lumetric” Canadian-come-Californian artist Michael Hayden. The piece is 744 feet long, with 466 tubes that are not neon, but “actually composed of argon gas and mercury vapor in phosphorescent glass tubes that were then painted with an enamel ink.” It is allegedly the longest neon sculpture in the world.

Prior to the O’Hare commission, Hayden worked on a similar sculpture similar for Disney – Kodak sponsored his popular curving rainbow tunnel, called the Rainbow Corridor, in Epcot’s Imagination! Pavilion. The corridor has since been removed, and the collaboration is now streaked with shades of irony and dystopian foreshadowing, given that Kodak’s anticipation for the future was met by its own demise.

Disney also had connections with architect Jahn, who was put in touch with Disney’s Imagineering division thanks to partnership talks between United and Disney occurring at the time. The two jointly planned to install 3-D vignettes in the side panels, similar to those in Delta’s Dream Flight at the Magic Kingdom’s Tomorrowland. The partnership fell apart, however, and plainer glowing panels were installed. (For more tenuously related material about the Future, Disney, and dystopia, check out Escape from Tomorrow)

The tunnel’s Californian connection doesn’t stop with Hayden and Disney. Former LA Philharmonic conductor William Kraft arranged the original music to accompany Sky’s the Limit, considered eerie by some and soothing to others. Kraft explained, “It is all pleasure, nothing violent, nothing dissonant. Eerie is not something I wanted. The outsides are meant to be beautiful and calming and let people know they are in for a pleasurable experience. The middle part is fun. It’s real fun.” Kraft was a tympanist for 20 years, and founded the Philharmonic’s New Music Group in the early ’80s. As a professor at UC Santa Barbara, Kraft reportedly joked of after performing the second movement of his Tympani Concerto, “Now the old ladies are really ensconced. You can do anything now.” 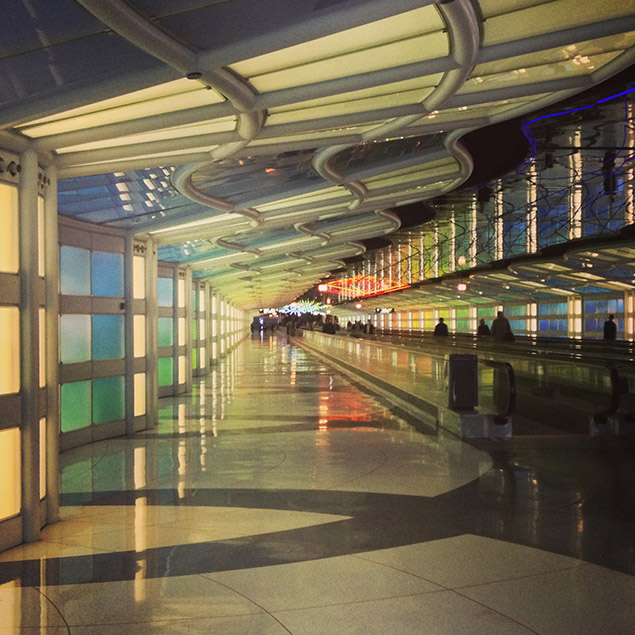 Not everyone has always been ensconced, though. When the walkway was first opened, Chicago Tribune contributor Bill Greene wrote of Kraft’s music, “It is so weird, spooky, bizarre and disorienting that-combined with the flashing neon-it has the effect that a person must undergo when he has taken an overdose of dangerous drugs.”

Apparently, Greene’s interpretation of experiences on dangerous drugs prevailed among United personnel –  in 1988, he gleefully reported on the airline’s decision to switch out Kraft’s composition to a synthesized version of Gershwin’s Rhapsody in Blue. Explaining the decision, Greene wrote that United turned away from Kraft, “the avant-garde California composer,” and instead hired Gary Fry, “a 32-year-old musician who was born in the Iowa town of Keswick (population 365) and who still lives in the Midwest.”

Despite competing interests in the look and feel of the future, the tunnel, like the work of Turrell, was born from a distinctly West-coast inspired search for something “purely” new. The resulting environment results from a trifecta of artists working in space, light, and sound. Collaboration is impure by certain definitions, and the chaotic airport is a far cry from a museum’s deliberate constructions.

Nonetheless, the tunnel continues to operate as an entertaining and calming landmark that keeps on giving. It affords the traveler something of a world not accessible by plane, while still accommodating the everyday movements of this world. That’s my kind of pure.