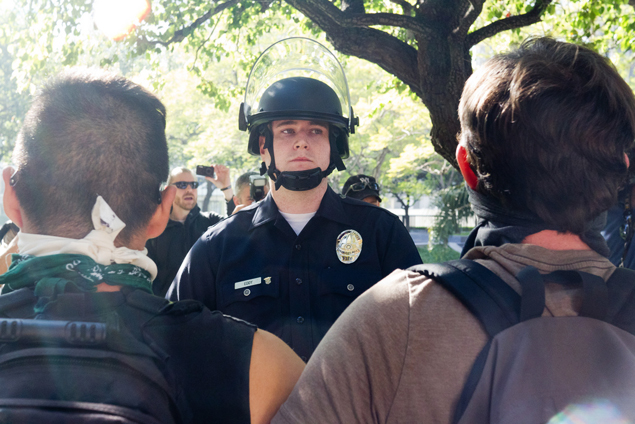 The Occupation of Silver City 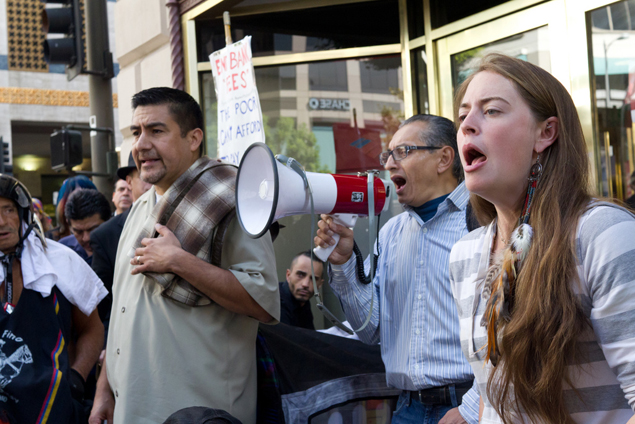 After two months of marked tolerance towards the Occupy Los Angeles (OLA) camp in downtown’s City Hall Park, Mayor Anthony Villaraigosa put his foot down, joining the trend of raids and evictions in major cities across the states.

The Occupy Wall Street (OWS) -inspired actions across the country are united under the banner of the 99% – but that doesn’t preclude each city from having its own flavor, dilemmas, and role in the ongoing dialogue that is this movement. Manhattan pioneers, Oakland port-stopper-uppers, and peaceful UC Davis students all made headlines. 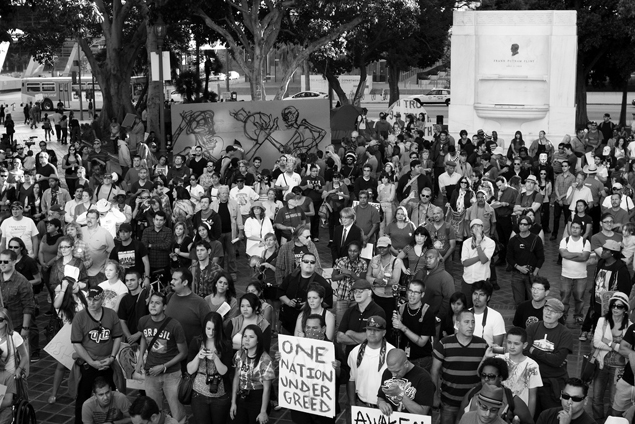 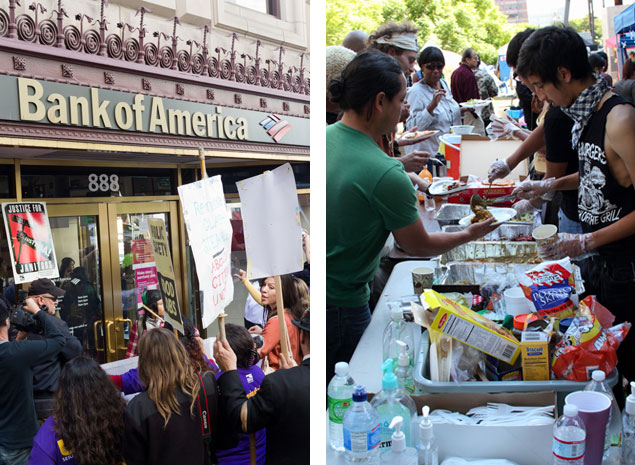 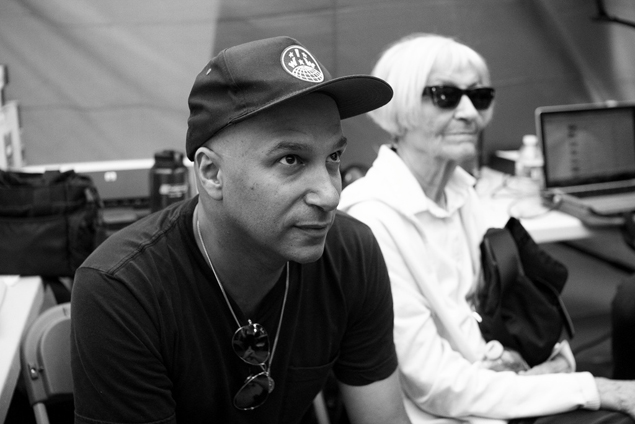 Los Angeles’s leniency towards the OLA protest stood in stark contrast not only to other cities with similar dilemmas, but also to the LAPD’s notorious history of unchecked aggression and police brutality. The attitude of city officials towards the encampment has been attributed to the Democratic Villaraigosa’s political ideals, as well as a fear of drawing harsh media and citizen criticism for potential police missteps and violence.

However, as camps across the country were raided and occupiers evicted this November, Villaraigosa’s tolerance of OLA’s encampment came to an end. The City of Los Angeles first offered the camp a new location in a warehouse for the rent of $1 per year – an enticing offer for a community with a strong contingent of nearby Skid Row’s homeless population. When this offer was refused, Villaraigosa announced the camp’s imminent eviction on grounds that waffled between concern for the park’s grass and his horror that children were allegedly staying in the camp. 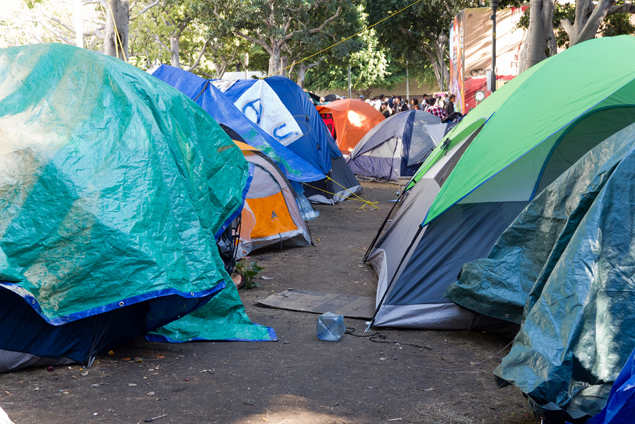 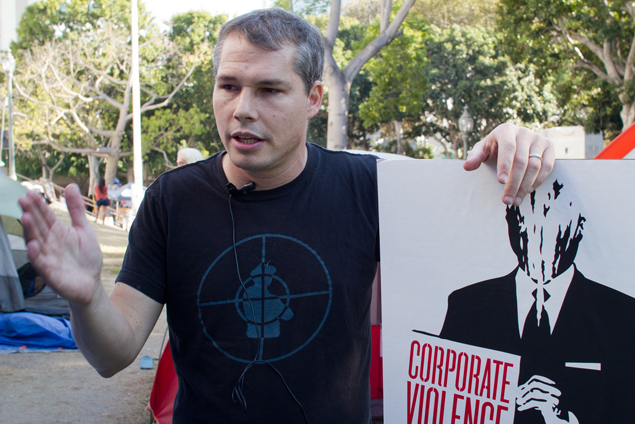 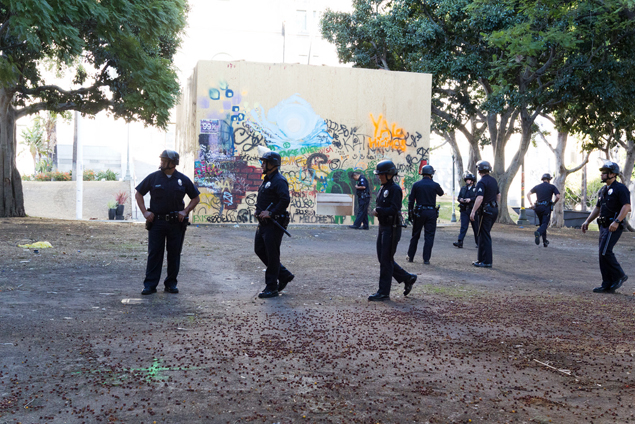 On Friday, November 25th, Villaraigosa announced that it would be illegal to camp in City Hall park as of 12:01 am the following Monday. The timing of this Cinderella-esque ultimatum gave thousands ample time to get downtown, filling and surrounding the park. Thus, the L.A. camp emerged, in true blockbuster fashion, as a last physical stronghold of the Occupy Movement.

Of the thousands gathered to await the eviction Sunday night, some planned to be arrested for their cause, while others wished to show solidarity and hopefully serve as eyes to curb or at least witness any police brutality. Major media outlets and citizen journalists made up a large component of the crowd. The linking factor was the mutual desire to make a show, and take part in history. The Occupy Movement has been a symbolic action from the start—so in a sense, the movement is the show. No one awaiting the city’s midnight deadline was fighting solely for the privilege of sleeping on City Hall’s lawn. In terms of gaining attention and influencing a large-scale shift in consciousness, the faceoff in L.A. was successful by 11 pm that evening, if not earlier. 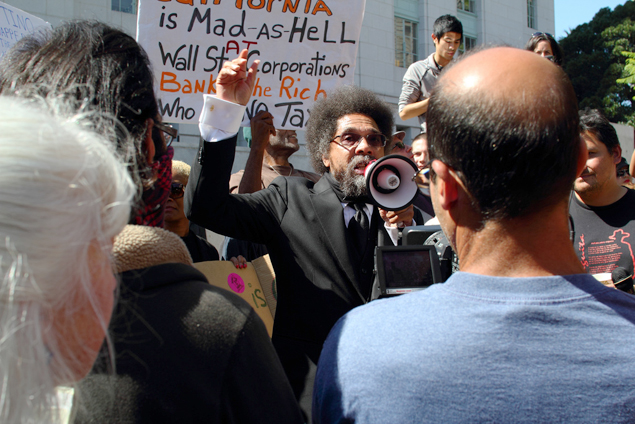 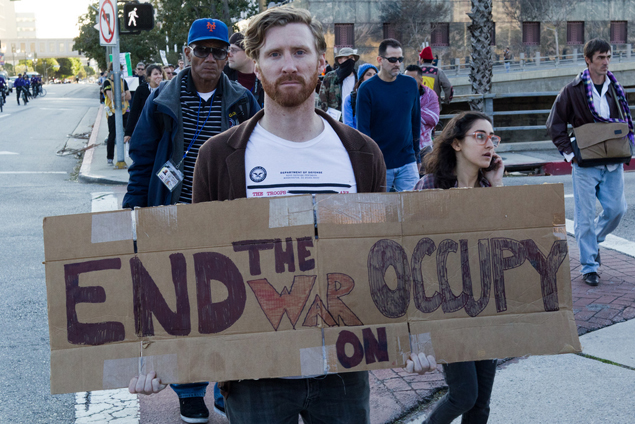 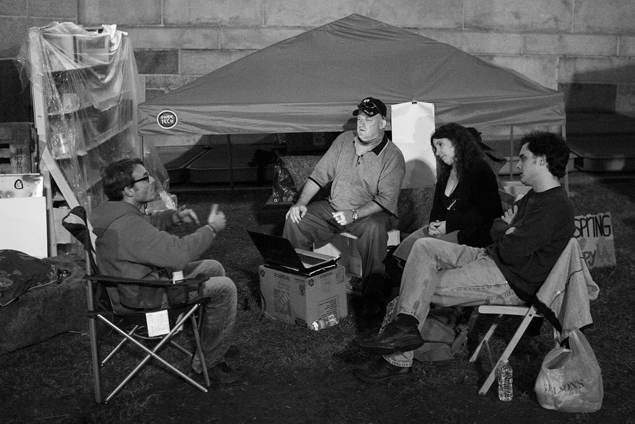 By 11:30 pm, a throng of people on the north side of Los Angeles’s City Hall listened to a presentation on civil disobedience, led by an animated young woman with French braided pigtails. They learned how to hold their thumbs so they don’t get broken, and were told to help shield anyone with an LD-9 camera.

“We’re in Hollywood, right? You guys know how expensive those are,” the presenter said. Laughter, and discussion of cracked ribs. A police officer watched the gathering from inside City Hall, behind the glass door.

As the midnight deadline approached, six or seven helicopters hovered above the park. A swarm of fast-moving bicycles circled the park in a show of solidarity as tension rose. Within minutes, the bike gang was chased off by motorcycle cops. The scene was set to a soundtrack of rapid drumming, and a few firecrackers. Present were not just Occupy die-hards, but grandmothers, vets, punks, professionals – the deadline allowed OLA to put its serious face on, the one that may be more digestible to the broad American public. 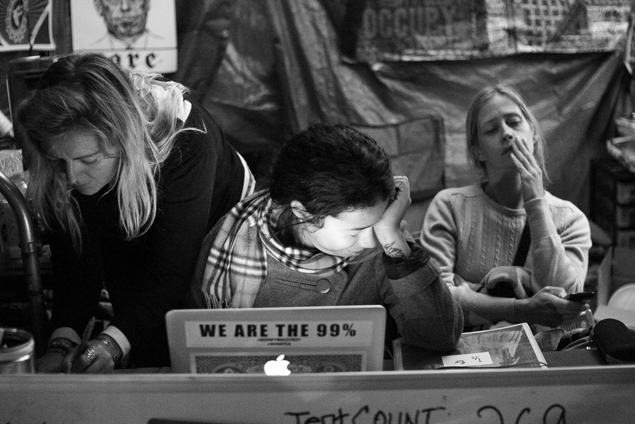 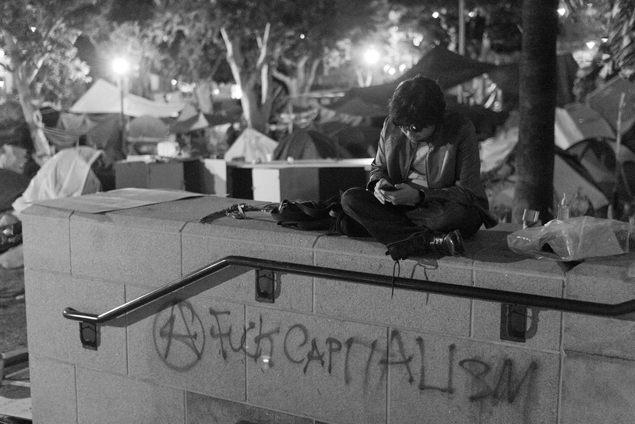 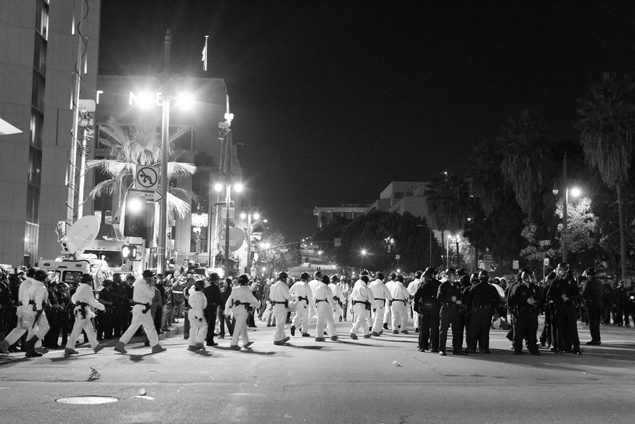 A bat-signal of “99%” was projected onto the white façade of City Hall. Two young men nailed pallets to a palm tree for an impromptu perch, while others scaled telephone poles or bus stop structures. Medics with crosses of red electrical tape on their shirts set up at an intersection, with apple cider vinegar and milk on hand to assuage the damage of pepper spray and tear gas.

When 12:01 had come and gone, the crowd formed a human chain surrounding the park, holding hands. As time passed and there was still no action, the crowd waned. A contingent of restless Occupiers took the street, bringing a green tent to the intersection of First and Main.

At 4:30 am, the LAPD announced that they would not raid the park at present, but that they must clear the streets for the incoming work-day traffic. A small group of protesters claimed the intersection, but eventually the streets were cleared with few arrests. 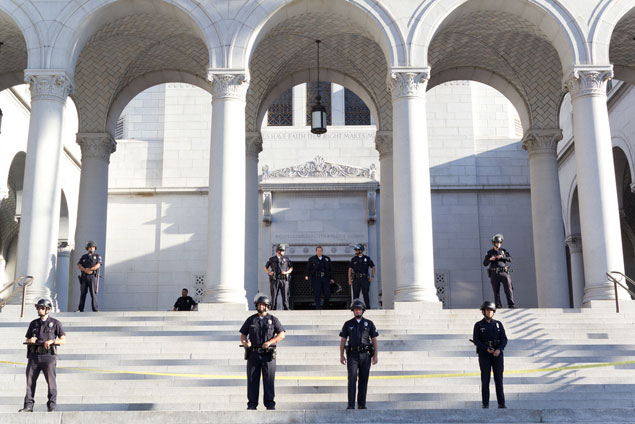 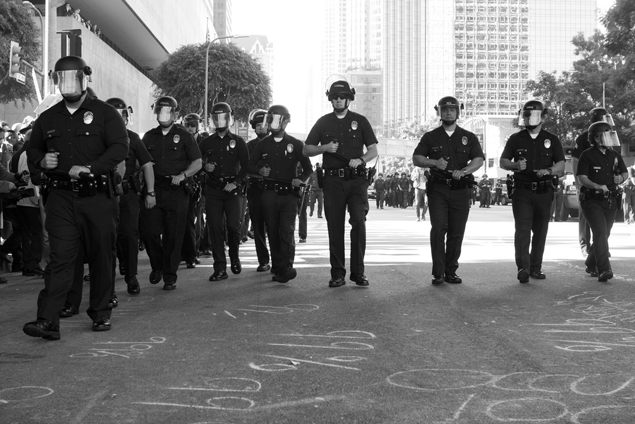 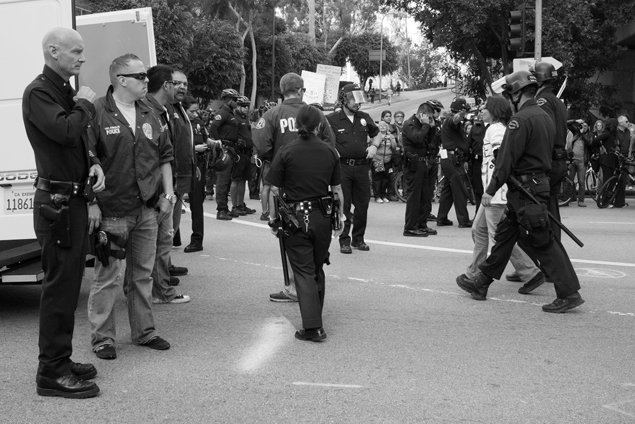 The camp was raided two days later. Early in the morning on Wednesday, November 30th, over 200 Occupiers were arrested in a relatively peaceful eviction of the park, in part attributed to the LAPD’s “Trojan Horse” tactic of hiding police in the City Hall building itself.

The aphorism “You can’t arrest an idea,” has permeated the social networks, as well as in broadsides around Los Angeles. And it’s true, you can’t—after L.A.’s showdown in the park and its relatively anticlimactic denouement, the momentum of the Occupy movement continues both in the media and on people’s minds.

From both Obama and new “Justice Party” candidate Rocky Anderson invoking OWS rhetoric, to Occupy Filmmakers and Occupy Writers—the latter including names like Barbara Kingsolver and Jonathan Lethem—to a gleeful Michael Moore in conversation with Naomi Klein and others on Democracy Now!, to the infinite application of #Occupy [insert word here], and beyond, it is clear the sentiments of the Occupy movement have irrevocably altered the nation’s dialogue of possible futures—even if the tents are gone. 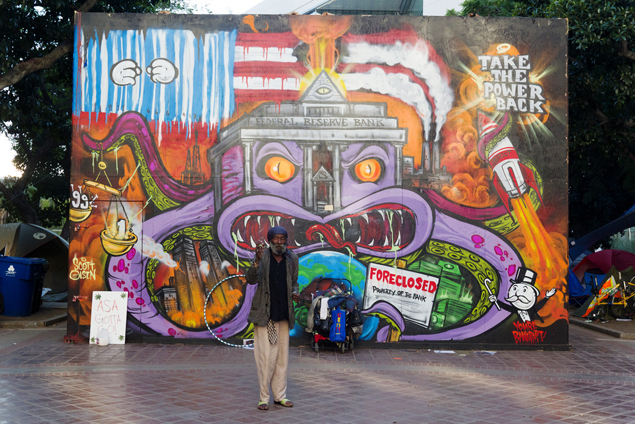