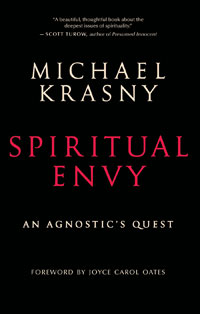 As the host of the popular Bay Area NPR morning talk program Forum, Michael Krasny is known for being amicable and level-headed—a rare quality in the minefield of talk radio. He brings this same cool-headed, polite tone to his new memoir Spiritual Envy: An Agnostic’s Quest, which is both a tale of personal spiritual exploration and a study of agnosticism. Religious debate is a minefield of its own, and it’s his deliberation and tolerance (some might claim over-tolerance) that again separates Krasny from other voices in the debate: mawkish, opportunistic, self-appointed spiritual guides; fervent absolutists willing to denigrate, if not harm, those who don’t subscribe to their petty tribal beliefs; as well as the new guard of fervent atheists dead-set on taking the fight to religion for a change.

It’s this latter group—Christopher Hitchens, Richard Dawkins, Bill Maher and others—that seem to have most inspired Krasny to take up the endeavor of preaching agnosticism. He feels that their absolute commitment to what they see as the bald truth of the issue—that God is nothing more then a projection of humans, and a tool used by a select few to manipulate gullible believers—puts them in the same camp as their purported opponents, the fundamentalists who bring literal interpretation to their religious texts. Krasny is respectful of Hitchens and Dawkins and the rest, as he is of people of faith, so long as they don’t try to force their beliefs on others, or do physical harm to those they disagree with. For most readers, even those like Krasny who are firmly on the side of no side, this respect might be a bit aggravating, coming off as too tolerant, such as when Krasny expresses envy for the inner peace displayed by members of some of the least respected spiritual sects, such as the Hari Krishnas and Moonies. He sums up his attitude in a quote from the man who coined the term agnostic, Darwin’s friend T.H. Huxley—“to suffer fools gladly should be the rule of a true agnostic.”

Krasny’s book puts into words the uncertainty and perplexity we’ve all felt while searching for a hint of what—if anything—exists beyond us.

Suffering his own doubts is another, and one that has long been both a boon and source of aggravation to the author. In the autobiographical sections of the book, he traces his uncertainty to the point where most Americans who lost their faith probably would pinpoint their own nascent doubt: early adolescence. Up until then, Krasny had been a good Jewish boy, certain of God’s existence and love. But as he grew up, the same questions which we all start to consider cropped up: how can a loving God allow for needless suffering; how can we ever prove something which by its very nature is beyond our reasoning; how do we meld dogmatic rules with our inherent virtues and those that seem in opposition to tradition? Then of course there is the siren song that is belief in nothingness, which allows for the possibility to rise above petty morality into something approximating Nietzsche’s übermensch. Yet, as Krasny continued his life and education, he could never completely dismiss the possibility of the divine, or the existence of a set of transcendent moral boundaries. In times of doubt or fear or thanks or amazing coincidence, he would revert to that boyhood feeling of being watched over by some deific force, while simultaneously questioning this reaction.

Krasny is an English professor, and the book’s overview of the developments which have brought us to the current age of skepticism and non-denominational spirituality are illustrated through literary reference: Beckett’s Waiting For Godot, The Brothers Karamazov’s doubting Ivan and his pursuit to define morality in a universe bereft of God. Spiritual Envy can lead the interested reader to a couple dozen important works that could be important to their own evolution, from Spinoza to Flannery O’Connor. For an intellectually curious young person who is starting to question their beliefs, Spiritual Envy could prove quite formative. Fans of Krasny’s radio program, Forum, will likewise appreciate the book, as it gives open and honest insight into its author, without being self-aggrandizing, pedantic or exploitative—as memoirs too often are. As a philosophical exploration it doesn’t break any new ground. But it puts into words, concisely and with recognizable humanity, the uncertainty and perplexity we’ve all felt while searching for a hint of what, if anything, exists beyond us. And for those that may be straddling the line between faith and disavowal, Spiritual Envy might just convince you that the most reasonable, indeed noble, stand you could make would be to hold fast to that same line, while never holding so fast as to disallow eventually tipping over, whatever side you may land on.

Read our interview with Michael Krasny about this book and other matters.