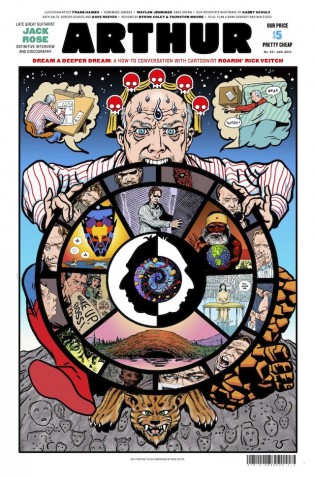 Arthur Magazine has returned to print as a broadsheet newspaper after years in hibernation. Desert-dwelling editor Jay Babcock, of Joshua Tree, California, is trying a new business model for the paper—reader-supported, rather than dependent on ad revenue. The first issue of a renewed Arthur (issue #33) was released in December 2012 and a second issue follows in April 2013.

The magazine offers a unique perspective, with an eclectic mixture of music coverage, art, drugs, and politics that represents a broad sampling of the American counterculture, from punk (Sonic Youth’s Thurston Moore has long been a contributor) to hippie psychedelia (Arthur will keep you up to date on magic mushroom subcultures, composting, and drone rock).

In an era of musical subculture fragmentation where it’s difficult to even discern trends and movements, Arthur defined a zeitgeist of their own in the attention it gave to the 00’s folk revival—”freak folk” if you want, though I don’t know if they originated or promoted that label—that included artists such as Devendra Banhardt, Joanna Newsom, Jack Rose, Josephine Foster and many others. So its appropriate they return with a giant interview in Issue #33 with the late Jack Rose.

Not just a music magazine, during the Bush years Arthur mixed alternative culture coverage with anti-war, anti-establishment and off-the-grid thinking that promoted finding your own ways to beat the system, or sidestep it. Idiosyncratic, independent, and in-depth, Arthur has been much missed and its return to print widely reported.

The format is also notable—Arthur is now printed as a giant posted-size broadsheet, the kind that daily newspapers are rapidly phasing out.  The paper is a bit thicker than standard newsprint, and the first issue ran several pages of bright full-color and a few pages without.

The use of broadsheet places Arthur in the company of a handful of other small indie publishers making creative use of the broadsheet format.

First of all, McSweeney’s, who in 2010 published an epic 320-page experimental newspaper, the San Francisco Panorama, employing comics-as-news, poster-size infographics, long stories with word lengths you’d usually find in a monthly, and a multitude of other things not seen usually seen in broadsheet format.

Another project, the San Francisco Public Press (which, full disclosure, I worked on, mostly as a volunteer) is using broadsheet for their reader-supported, public-interest newspaper, released quarterly.

Arthur’s use of the format promises to be interesting, and as its influence percolates, raises the possibility of a revival of the large-format printed newspaper as a different kind of entity. As newspapers across the country turn their attention and budgets towards electronic media, Arthur is determined to stay alive in print in a format most of them have already abandoned.

Subscriptions to Arthur are not being offered, or at least not yet. Each issue is being sold as produced on their web store or at select locations.

Editor’s note: Article has been edited to add more alternative broadsheets. If the reader is aware of others, please leave a note in the comments.